The battle between the ball-getter and tackler is on in earnest and the umpire is circling. Even before the whistle is blown, football’s loudest chorus: “Baaaaaalll!”, echoes through the stadium.

This comical scenario has long been a trademark of the Australian game, which might be part of the reason its frequency continues to rise.

A number of years ago, when I questioned one former coach as to the game’s modern tendency to advantage tackler over ball-player, he spoke fondly of the ‘Baaaaaalll’ moment. As though it, in itself, was why the paying ‘holding the ball’ free kicks was a good thing.

Given the predilection of some marketing-type, modern administrators for ‘entertainment’ – even above the game itself – perhaps this coach was onto something. And when you have marketing-whizz administrators and entertainment on the same side of a football argument, with coaches willing to join them, you have a potent cocktail.

The pity is, it’s also a dangerous one, which threatens to forever change the game.

That’s not just my opinion, it’s one that was forcefully articulated by Leigh Matthews on radio last Saturday. Matthews, you’ll recall, was a reasonably tough footballer who was voted ‘Player of the 20th Century’.

So, going back to the first line of this column, the battle between ball-getter and tackler is on in earnest. Big picture. And the tackler is now very much in the ascendancy. That the balance of power has swung decisively in recent years is largely because the forces representing the tackler’s case are so formidable.

Foremost among them are the coaches. Already powerful in their access to the public psyche, the clipboard holders also seem to have a new hotline to power via the AFL boss, Gillon McLachlan. The idea of a convivial annual dinner at the CEO’s home might seem like a nice idea, but it carries with it a risk of over-exposing the game’s CEO to ‘coach-think’.

A serious offering here: perhaps McLachlan should only meet with the coaches in a formalised setting and with another senior executive or two in attendance.

Among the comments Matthews made was an admission that in his coaching years he defected to ‘the dark side’. He was referring to the fact that coaches place the highest of emphasis on defensive skills, tackling in particular. Thus, they want these disciplines to not only be permitted but rewarded by umpires.

So, when Alastair Clarkson was talking last week about saving Joel Selwood from himself in relation to ‘the shrug’, and when Brendon Bolton was calling for a further reduction in tolerance for the ballplayer caught in a tackle, they were talking a similar language to the one Matthews, himself, once spoke. 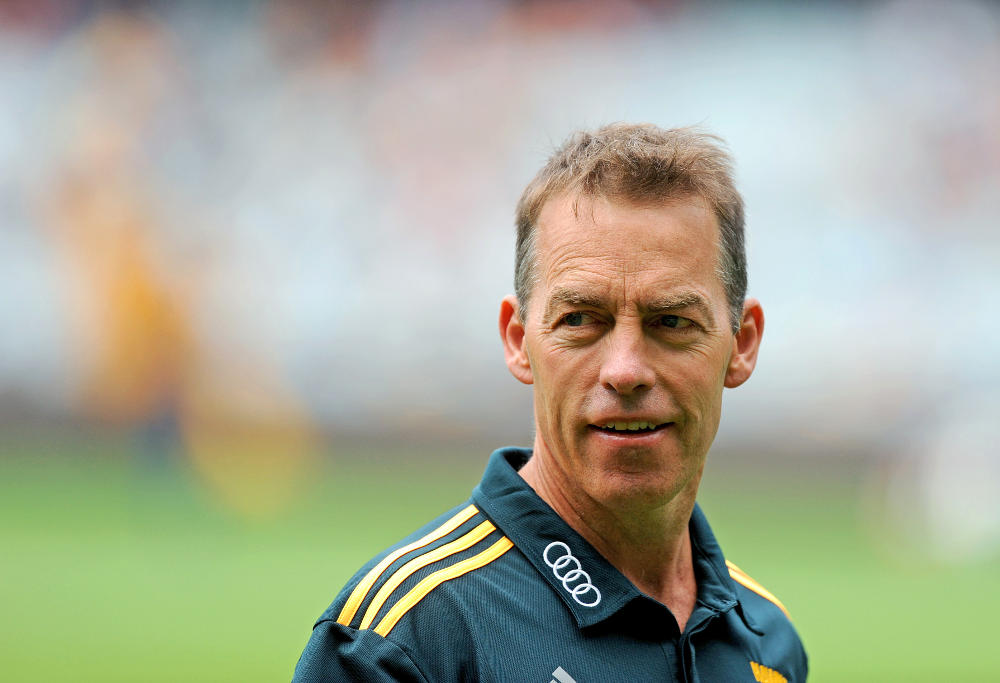 Now, though, the man once known as ‘Lethal Leigh’ is an observer and commentator on the game. And he sees things differently. And he’s watched a lot of it over a long time. His view is infinitely more relevant than that of men who are conflicted by their own involvement.

On the heels of the comments made by Clarkson and Bolton, McLachlan indicated his view that ‘prior opportunity’ should be further reduced. Which, bearing in mind that it’s now down to a fraction of a second, could only mean that when a player is caught with the ball, he would be penalised even if there had been zero opportunity for him to dispose of it.

McLachlan referred to such a change having the effect of breaking up the all-too-frequent congested phases of play. But not only wouldn’t this be logical in football terms, it just wouldn’t be that simple.

As for the logic: why should a player be penalised simply because he took possession and was immediately tackled? It shouldn’t be a sin to take possession of the ball. Furthermore, the long-standing interpretation of the game’s laws was never to reward the tackler. Traditionally, the idea was that tackling brings its own reward by slowing the progress of the team in possession.

Notwithstanding that the indigenous game once encouraged risk and adventure, why would a player want to take possession of the ball in situations where he knows he’ll be tackled and penalised? And while the predictable response is that footballers will always try to win the ball, they won’t if their coaches tell them to hold back and sweat on their opponent doing it first. And what a fun game that would be to watch.

This is the law of unintended consequences.

The point is, in a game with laws that have always demanded a greater degree of interpretation than most other sports, Australian football long loaded its interpretation in favour of the player going for the ball. And the logic was clear: it’s a tough game, and the player with the courage to get there first deserved the benefit.

Now, this is changing – so fast it’s hard to see it being wound back.

For those of us who shake our heads each time a player is penalised for no worse a crime than that of winning the ball, this represents a gross administrative failure.