No sooner than the tune had switched to Ferrari becoming the hunted did the Maranello outfit regress to its former state of strategic indecision, and the irony is that a safety car potentially erased its blunders at Shanghai on Sunday.

That Sebastian Vettel was subsequently spun by Max Verstappen is irrelevant, for Ferrari’s primary opponent, Mercedes, saw another victory unrealised when this weekend had the potential to place the German manufacturer back in the contest, having appeared bereft for answers following qualifying.

Third to Kimi Raikkonen and ultimately eighth to Vettel was the reality, as opposed to sixth for the Finn and second for the former – as they had been running prior to the safety car, which sounds like a better deal, though it will be delighted that Bottas, with Lewis Hamilton not figuring in contention at any stage, was forced to settle for, or perhaps crudely, again accepted second.

One driver who certainly benefitted from its appearance was Raikkonen, who for the umpteenth occasion in recent memory, was sacrificed to enhance Vettel’s prospects, having fallen victim to the German’s aggressive tactics off the grid into T1.

He slipped to fourth and was held out until his compatriot, having undercut Vettel thanks to a shrewd early stop and blistering out lap, passed him on lap 27, ceding position to Hamilton and Ricciardo in the process.

Yet, the 2007 world champion could have achieved even greater than the bottom step on the podium had he switched to the soft compound as the safety car was deployed, unable to pass Bottas despite sticking on his tail in the closing laps.

Where the Red Bulls gained in deficit nullification from the intervention – triggered by friendly fire from its’ sister outfit, Toro Rosso, was duplicated by a second double stacking switch to softs with twenty-five laps remaining, followed by three precious laps at a crawl to conserve rubber for an all-out tilt to the flag.

On the restart, Verstappen over executed a move on Hamilton, which dropped the Dutchman behind Ricciardo. A few laps later, having climbed back to fourth, he over executed, again, this time colliding with Vettel, from which the German emerged second best, tacitly remarking “I don’t need to say anything here”, placing an exclamation mark on a scrappy Sunday when a third victory from three starts would have amounted to going in for the kill at this early stage of the season.

It goes without saying that on paper, Raikkonen has appeared to be the cleaner of the two Ferraris over the opening three events, only for inopportune nature to take its course and deny the Finn on each occasion, which has been a recurring theme – particularly over the past twelve months, thus it was ironic yet appropriate that he was the Prancing Horse’s breadwinner on Sunday. 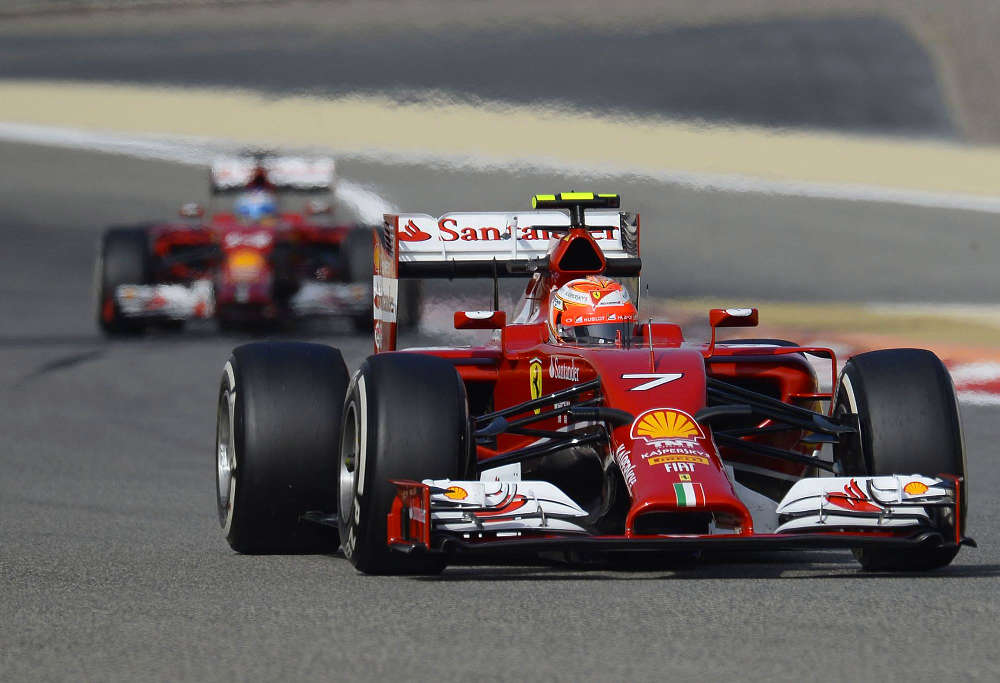 For Mercedes, it seemed to have cracked the code to its indifferent form, only for Bottas to again display that he isn’t desperate enough to get his elbows out with a victory on the line. Meanwhile, Hamilton has been operating on seven cylinders – or five in the modern F1 parlance, as though the wind has been blown out of his sails since having first snatched from his grasp at Melbourne.

All of which equated to a relative stalemate, as Red Bull – Formula One’s pied piper, finger trouble with wunderkind Verstappen, engine failures and the rest, saw an opening and went with it.

Displaying on the seldom occasion in recent years when it has its ducks in a row, there’s little to stop its charge, and boasting Daniel Ricciardo – who wants it badly enough, and whose teammate continues to try too hard, “sometimes you have just got to lick the stamp and send it.”