Round 7 preview: Dragons to go 7-0, Parramatta get on the board

Ahead of Round 7 of NRL action, here’s a rundown of the upcoming matchups.

Bulldogs versus Roosters
Will the real Sydney Roosters please stand up? The Roosters may be going into this game as favourites but this has meant little in a few games this season. They have looked every bit premiership favourites in big wins over the Knights, Sharks and Bulldogs in Round 2, but have also looked really vulnerable in losses to the Tigers, Warriors and most recently the Rabbitohs in games they were expected to win.

The Bulldogs, meanwhile, got out to a 25-0 lead in Townsville at one stage, in what was an impressive away win for the “dogs of war”.

This won’t be an easy win for the Roosters. If there was ever an incentive for Michael Lichaa to run it would be the damage Damien Cook did out of dummy half last week against the Chooks. The challenge is there for the big Bulldogs pack to rattle the likes of Dylan Napa and Jared Waerea Hargreaves and thus limit the impact of the likes of James Tedesco, Luke Keary and Cooper Cronk. Playing at home, and for Josh Morris in his 250th NRL game, the Dogs of War will stand tall.

Warriors versus Dragons
Who would have thought that this would be such a high profile clash at the start of the season? The unbeaten Dragons take on the almost perfect Warriors over in Auckland. A big crowd should be on hand in a primetime slot for the home fans.

Each time the Sharks started to get a bit of a roll on last week the Dragons just went to another gear. They look good all over the park, and the Warriors have a job finding a weakness.

The Warriors looked down a little bit last week after a very impressive first five weeks of football, but none the less will be the Dragons biggest challenge to date.

The Dragons have been slightly more impressive in their opening six games. They have rarely looked vulnerable and have a fantastic record against the Warriors in recent times, whether it is playing at home or away.

The Dragons will continue on and go into a big ANZAC day clash against the Roosters undefeated.

Broncos versus Storm
Two proud clubs who found some form last week after rocky starts to the season. The Storm got back to what they do best, putting forty on the Knights at home with a new look halves pairing.

The Broncos managed an impressive away win over the unbeaten Warriors, they too testing out a new halves pairing, with Jack Bird at five-eighth.

The Storm don’t worry too much about travelling to Suncorp, jagging some big wins at the venue in the past.

Both teams are desperate for some momentum and consistency after indifferent starts to the season.

The Broncos win last week was all the more impressive owing to the venue and the unbeaten opposition. Sure the Storm scored forty, but they had a massive share of possession in the first quarter, and the Knights kept coming, but just didn’t have the class or the energy left in defence.

At home, the Broncos will record a slender win.

Rabbitohs versus Raiders
Two teams coming off good wins go head to head at Central Coast Stadium. The Raiders held the Eels try-less in the nation’s capital in poor conditions. The Rabbitohs looked very impressive in a win over premiership favourites the Roosters.

This is an important game for both clubs. They haven’t been terrible by any stretch to start the season, nor have they set the world on fire. The Raiders were involved in some really tight losses to start the season, but if they can get three wins in a row, that could really get the momentum going for their season.

South Sydney too have had some matches that could have gone either way, and they will want to keep their record positive with a 3-3 start to the season so far.

The Raiders need to shut down Damien Cook and be on high alert for the returning Sam Burgess. The Rabbitohs need to be wary of a confidence team in the Raiders, when they get going they can be a hard team to stop with some real weapons in the backline. 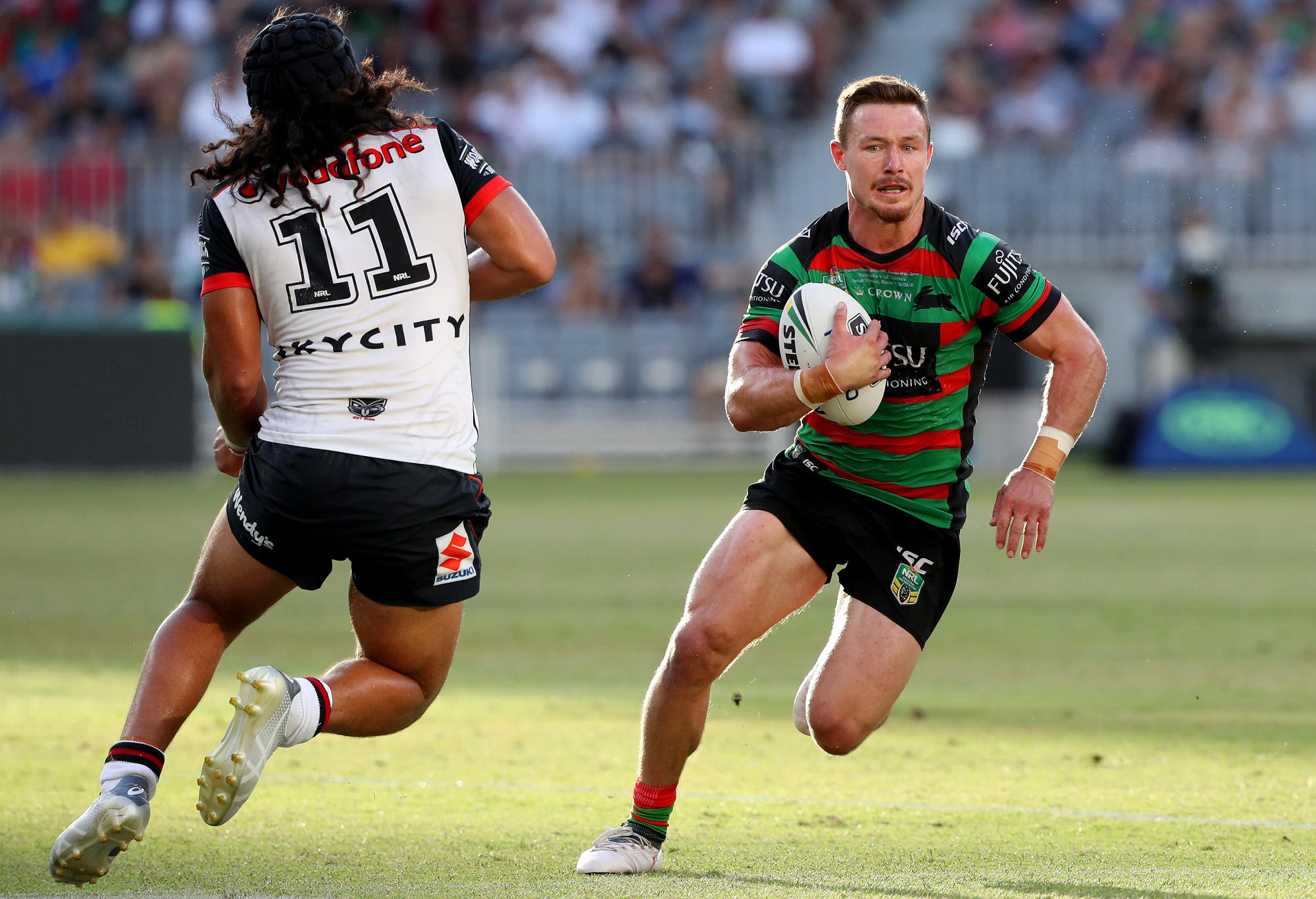 This should be a good game and could go either way, but with the Raiders away from home the Rabbitohs will get the win.

Tigers versus Knights
The NRL comes to Tamworth on Saturday night. The Tigers just keep getting better after going out to Brookvale and embarrassing the Sea Eagles in a big way last Sunday afternoon. After starting the season so well defensively, they have shown their hand in attack too over the last few weeks, putting 30 on the Eels and now Manly.

The scoreline in the Knights loss last week didn’t tell an accurate story. The Storm built a big early lead with all the possession and penalties going their way at home. But the Knights kept trying, keeping the Storm honest and having the score blow out against them late.

This should hopefully be an entertaining clash for the country crowd. Both have surprised to start the season, but especially the Tigers. The Knights will put up a bigger fight than the Sea Eagles did as their team has great spirit and belief. But you can’t tip against the red-hot Tigers at the moment.

Cowboys versus Titans
Are the Cowboys in crisis? Just one win to start the season and with their most influential players well down on their best, another loss here would be danger signs for the North Queensland club.

The Titans were soundly beaten by the Panthers last week but there is plenty of context to go with it. Nathan Peats played just 27 minutes, Ash Taylor got a head knock, Ryan James was suspended and Bryce Cartwright was sin-binned. One of the Panthers’ tries was scored while Mitch Rein lay in back play.

The Titans always put up a fight, they have come out in a few games this year as underdogs and put sides away and are a big chance again. The Cowboys have had a few games at home now where they have been expected to come alight and click but have failed. There is nothing to say it won’t be the same story again on Saturday night.

Eels versus Sea-Eagles
They have to win eventually. That is the reality for Parramatta and the match is coming where they manage to jag a win.

Back at home, against a Sea-Eagles side that is also struggling for form, they simply must win.

The Sea Eagles have looked sluggish away from home this year, and their biggest attacking weapon, Tom Trbojevic, looks hampered by an ankle injury. 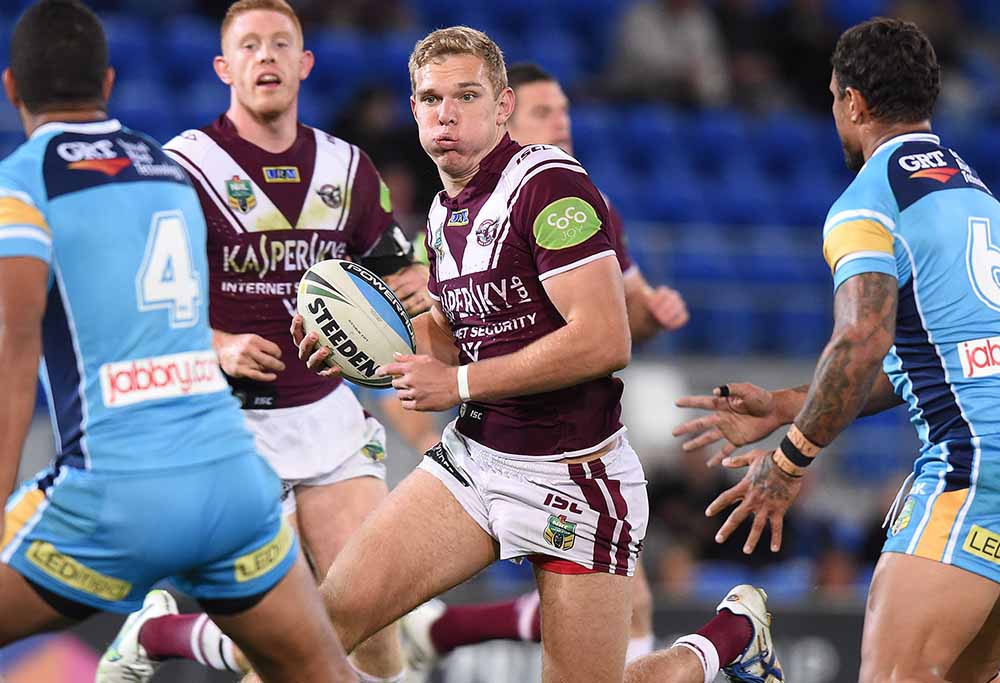 The Eels welcome back Brad Takarangi and Jarryd Hayne, while they have dropped Bevan French and Kirisome Auva’a.

This is the week Parramatta fans, Clint Gutherson will have a hand in two tries, and deliver their Eels a breakthrough win.

Panthers versus Sharks
Two sides that are wounded but have very different form lines. The Sharks have a pair of wins to start the year, the Panthers have dropped just one game.

Cronulla finished last week with virtually no bench. Luke Lewis, Paul Gallen, Wade Graham and Andrew Fifita left the field and are under injury clouds for this week and beyond.

All the talk around Penrith is around James Maloney and the rich vein of form he finds himself in. Many wondered how the Panthers would go without young sensation Nathan Cleary, but they haven’t missed a beat. All eyes will be on him, and the man he replaced, Matt Moylan, on Sunday afternoon.

The Sharks have struggled in attack, and tinker again with their spine this week, with Josh Dugan going to fullback and Moylan in the halves. They will now struggle with their go forward, with several big-name forwards sidelined. The Panthers will make a statement in Shark Park on Sunday afternoon.