Melbourne rugby’s grass roots might be grey, but they’re healthy and growing

The disconnection that has been allowed to develop in Australia between professional and grassroots rugby is both real and one of a number of reasons why the health of the game remains parlous.

But even if some agenda-driven commentators continue to finger-point, shame and points-score, what matters more is the work being undertaken in various parts of the country – often outside of the media spotlight – to reinforce the true values of the sport, and bring all participants back under the same roof.

One of those pockets exists in suburban Melbourne – not a renowned or natural heartland of rugby, but where a fast-growing bunch of rugby tragics has, through their love of the game, shown a way forward for rugby fans and professional administrators alike.

Initially formed in the 1980s, then dying off, before being resurrected in 2015 with two sides, Vic Masters Rugby now numbers 12 teams and counting.

Not only does it provide any player over 35 years with two legs (or half a good one) a regular game of rugby, an opportunity to bond with like-minded mates, and to quench a thirst, it also shows how the gap between the elite and amateur game is not as wide as some would have us believe.

Of course ‘golden oldies’ rugby has thrived across the world for decades, and there are plenty of similar social rugby outlets around the country, but what impresses most about Vic Masters is that this is no short-term sugar hit.

Embracing a high level of organisation and links to prominent men’s health issues, there is a determination to ensure that the experience is lasting, fun and rewarding for all participants – including the players’ families.

After initially operating outside of the Victorian Rugby Union, a natural footing has been found where the Vic Masters functions as a distinct entity, but with teams affiliated to, and all players registered with, Victorian clubs, ensuring proper integration with the sport’s existing infrastructure.

This is important for a number of reasons – connectivity, longevity, enhanced rugby identity, and the chance for small clubs operating on the smell of an oily rag to pump out sausage and onion sangers and a few beers over the bar to bolster their coffers.

Rather than adopt a standard home-and-away fixture, Vic Masters comprises a series of festival days, where each club gets to host all of the other clubs once during the season. It’s a great model – multiple games occurring simultaneously, with players from one club filling a spot for another club where they might be short. And even if the pre-drink-drive days aren’t revisited and crowds disperse at a respectable family hour, the events represent a welcome boost for each hosting club.

“It’s not just AFL too,” he explains. “We don’t have any juniors, obviously soccer is popular and in this particular area, the Melbourne Storm are big and rugby league does a lot of recruiting. But we’ve got a great little club and, along with our competition sides, the Masters is a fantastic addition.”

While modest, the Maroondah clubhouse is functional, and – most importantly – it is theirs. The playing surface is exemplary, one of the best in Melbourne, if a little firm for some of the old bones who find themselves going to ground a little easier than they might have two or three decades earlier.

While all of the teams comprise a misfit, mish-mash of Kiwi, UK, South African and Pacific Islander accents, do not assume that this is an ex-pat concern. The sideline is overwhelmingly middle and working-class Australian, with ear studs, tatts, wrap-around sunnies and animated conversations about how hard it is to get a decent apprentice to the fore.

Adding to the colour are the players themselves, their club jerseys sporting not only their numbers but nicknames such as ‘Twinkie’, ‘Critter’, ‘Step-bro’, ‘Cider’, ‘Pizza’, ‘Detective’ and ‘Chewie’.

There are stories at every turn; Matiu Makiha, whose idol is the late ‘Stormin’ Norman Berryman; Gloucester native Karl Dix, who finally retired from first-grade rugby at the ripe age of 44; ex-Randwick club man and Australian kickboxing champion Andrew Pitt; and Irishman Niall Guing, who speaks for every rugby player when he says “the first beer drunk after a tough game of rugby is the most satisfying drink there is.”

Respect for the game, opponents and the referee is paramount, with a ‘no fighting’ rule firmly in place in case anyone happens to forget what they are really here for. None of which prevented a minor controversy in one of last weekend’s early matches, when a length-of-the-field kick-and-chase almost led to a try, with the exhausted attacker knocking on in the final act of forcing the ball.

The equally knackered referee was found on halfway, in no position to rule accurately, but nevertheless he signalled a try – which naturally brought howls of derision from the sideline. Sensing a snafu but without a TMO to call on, the ref thus employed the time-honoured ‘honesty system’, asking the attacker if it really was a try or not, and the right outcome ensued. If only professional sport was so pure and so simple!

Brendan Matthews from the Powerhouse club is another to tout the benefits of Masters rugby: “The rugby is actually only a small part of it. It’s an important avenue for men to be able to socialize outside of work and family – just like we did when we played when we were younger. But then we’re still able to bring the wives and kids in on days like these and really hone in on a community focus.”

Interestingly, while the crowd sports livery from all corners of the world, it is Melbourne Rebels merchandise that is by far the most prominent. As pleasing as this is, it’s not by accident.

A large selection of Masters players recently played a curtain-raiser for the Rebels vs Brumbies Super Rugby match, in the guise of the ‘Old Blacks’ versus the ‘Wannabees’ and more matches are mooted for the future (and yes, just for the record, New Zealand won that one too).

Regardless of the commercial potential for rugby in a city of 4.9 million people – cited as one of the reasons for the retention of the Rebels in Super Rugby ahead of the Force – the Melbourne organisation clearly understands the importance of forging ties with its natural constituency in the wider community, and ensuring that the relationship is two-way. 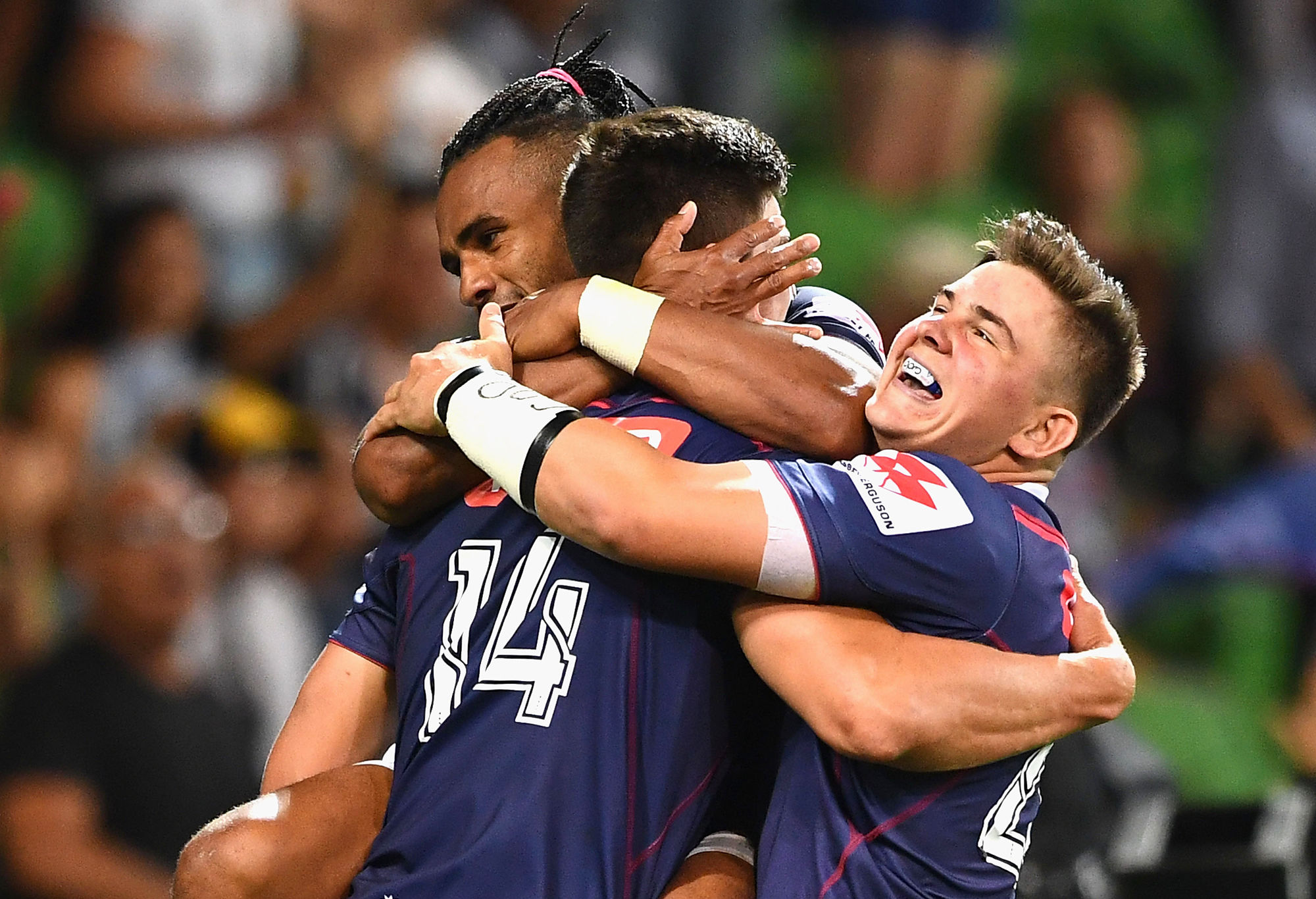 The Rebels have embraced the local rugby community. (Photo by Quinn Rooney/Getty Images)

Certainly the goodwill in ‘Masters-land’ towards the Rebels is obvious, with no apparent roadblocks preventing connection and understanding. On the sidelines, there is little or no chatter around the politics of SANZAAR or Rugby Australia – rather, these are people who want to enjoy the game at a personal level, who understand rugby’s structure and hierarchy, who want the sport to be successful in Melbourne at all levels, and feel like they are part of that.

While the scale is modest – this is Melbourne, AFL central after all – these are important, solid foundations for rugby, at a time when the sport faces enormous challenges in Australia.

Vic Masters demonstrates the level of latent support for the game that is lurking in every suburb in every city around the country, and its undoubted success in Melbourne shows what is possible when enthusiasm and a shared love of the game take precedence over old grudges, petty parochialism and aloof administration.

Vic Masters deserves the full support of everyone in the game – players new to the game are welcome too – and anyone interested in finding out more, or reviving their old Campese goose-step, should contact their nearest rugby club, or visit the Vic Masters website for further information.

‘The Wrap’ in its usual format will return after a three-week pilgrimage through the south of the USA. Watch out next week for an update on Major League Rugby, the USA’s new professional competition.