The state of the game is the talking point of the week, as Ryan Buckland wrote about yesterday. Negativity abounds around low scoring, blowouts and scrappy play.

This sort of talk is standard every season, but it usually takes place in the bye rounds when there are fewer games to draw our attention, and the matches are spread out so each has more focus. Any example of the above is highlighted more than usual.

This year, the negativity has come early, possibly off the back of the Friday night game between the Western Bulldogs and Carlton. Friday night is the most watched game of any round, and this one wasn’t pretty.

Scheduling the Blues in marquee slots of Thursday and Friday nights three times in the first six rounds was an own goal of Terry Antonis proportions from the AFL, so they only have themselves to blame. The Victory midfielder was able to make amends on Saturday night, but the AFL media are unlikely to let up.

Ryan suggested that Richmond is partially responsible for the current trend that has seen more games be seen in a less than flattering light, and it does seem to be the case.

The Tigers lit a fire in the last month-and-a-half of 2017, and blazed all the way to a famous premiership off the back of unprecedented levels of pressure. 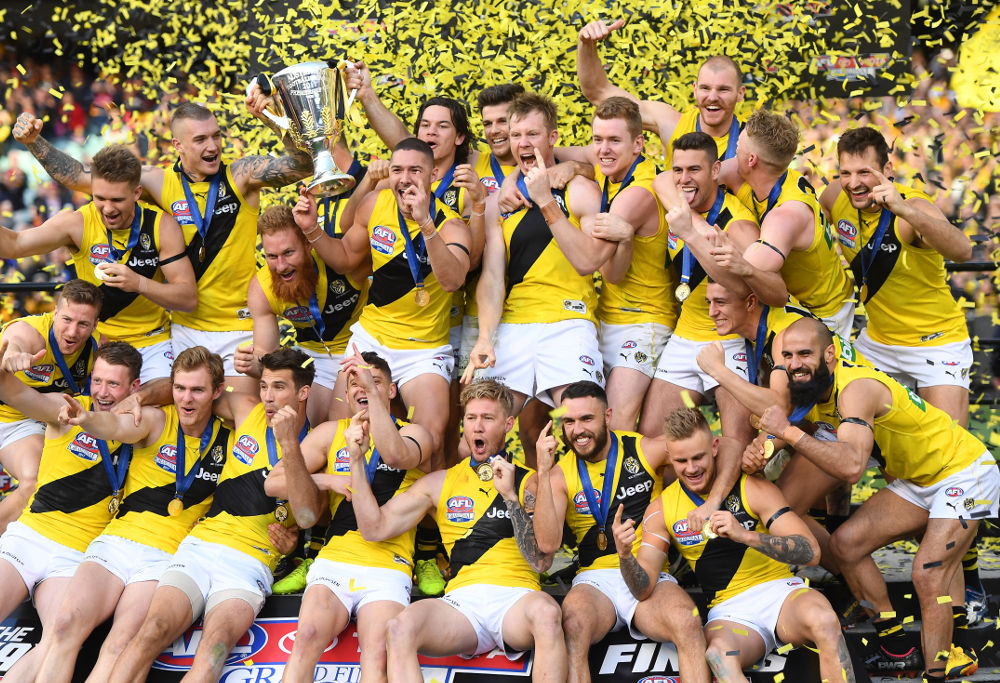 The gameplan was as unsophisticated as it gets in today’s world of over-coaching – defend wide when under pressure, then kick, push, prod, nudge, whack, scrap the ball forward at all costs, and get in the face of the opposition until they crumble.

In their last 16 matches, Richmond have a 14-2 record and are averaging 103 points per game. On paper it’s stunning, but the Tigers’ method ensures games are unattractive to many eyes. Their very essence is to deny teams the ability to play pretty football, and they get ugly in order to enforce it.

Good defence used to be about good defence, and attacking was a completely different weapon. Now, at least in Richmond’s case, offensive construct is almost completely based off the defensive method.

Richmond’s scoring comes when the game breaks their way, and the opposition crumbles. Then they drive a truck between the holes have opened in the opposition. Then, they dazzle.

The reason football appears to be less aesthetically pleasing than ever before is because there is currently no answer to pressure.

St Kilda under Ross Lyon and Collingwood under Mick Malthouse had pressure as their trademark, giving birth to the phrase ‘frontal pressure’. It felt like it was coming from one direction, and was about coaching tactics. Richmond’s pressure is 360 degrees, all over the field, and seems more about individual application, which is frenzied.

Given how successful the Tigers were, waltzing through September with an average winning margin of 45 points against three top four sides, it was only natural that opposition teams would look to copycat.

A common theme among Richmond’s opposition during this time has been that they just didn’t play well. But if the Tigers play well, it means the opposition simply can’t. And they usually play well.

Sides across the league are now focussing on applying pressure, and are getting better at it. By virtue of this, it’s getting harder and harder to play aesthetically pleasing footy.

What this also means is that intensity and mindset has never been more important in AFL football. It’s why we’re seeing such swings in form.

Sydney beats Geelong down at the Cattery missing Lance Franklin and Dan Hannebery, a week after going down at home to Adelaide missing their own stars. The Crows themselves rose up for that effort after getting trounced by Collingwood at their own home fortress.

Applying such fierce pressure is also physically and mentally demanding, especially so for teams that are a bit late to the party. The Tigers have been doing it for over a year now, and are well conditioned.

Remember, this time last season was when Richmond were getting overrun in matches against Adelaide, Western Bulldogs and Greater Western Sydney. Now, they are routinely storming over the top of teams that are limping to the line, rarely finishing with a fully fit 22 by the end of it.

Could it be that Richmond isn’t necessarily better than everyone else, as common wisdom has dictated in the last fortnight, but that they can be relied upon to play at a high intensity every week, and deliver on their gameplan? The Tigers can be trusted in a way few others can.

Pressure, when applied ferociously, is unbeatable. Richmond has unlocked the secret, and is delivering on it. When on song, there is a joy to what they do, and they are a pleasure to watch.

Most teams can’t deliver in the same way, and are too limited when under pressure themselves. By copying the trend, they’re actually falling further behind, and thus look ugly while doing it.