The battlers hall of fame: Underdogs, hard nuts and mullets

Imagine if rugby league hall of fame nomination was based on attributes aligned to the game’s head-down, bum-up blue-collar building blocks.

Buzz Rothfield would blow his stack. Instead of Ricky Stuart and Gorden Tallis; he’d be frothing the exploits of crowd favourites like blood-nuts Mick Neil and Alan Tongue.

For every Gasnier and King Wally, there is a list of unsung and often maligned support acts whose unique charisma is the essence of rugby league.

And believe me, choosing a team is no easy task. I was like a dog chasing its tail before settling on this line-up from the last 30 years.

And sure, he’s missing the Johnathan Docking headgear. But with the hide of a greased pig and energy of a Mexican jumping bean, his evolution may yet surpass the 1980s Shark prototype.

2. Ian Herron (1990-98: St George, Sydney Tigers, Parramatta)
Ian ‘Chook’ Herron was a gun Australian Schoolboy who kicked on to consecutive grand final defeats with the Dragons in 1992-93. Famous for an awkward prey-mantis approach to his goal kicks, the rocks and diamonds winger became the poster boy for coach Brian Smith’s thigh-riding Torpedo underpants.

That’s Chook in full flight on his footy card below, but his most endearing image is drawn on the flipside with words that read, ‘maligned for his wing play.’

3. Adrian Brunker (1990-98: Newcastle, Gold Coast, St George)
Kieran Foran’s Good Friday shank from in front of the posts tickled my nerve, but it was Michael Ennis and his instinctive scream of the word ‘Brunker’ that saw my cashews spray across the couch.

Adrian ‘Archie’ Brunker was blessed with Shaun Kenny-Dowall’s knack of the ridiculous and cost the Knights from a similar position back in the early 1990s.

One of Fatty Vautin’s all-conquering 1995 Maroon battlers, Brunker’s turbulent NRL career wound down in 1998. But his lasting legacy was scribed by Roy Masters a year earlier after a slap-stick afternoon at Kogarah Oval.

“The rivalry between ‘Archie’ and Darren Albert was almost comic book, with each taking turns to be ‘Jughead’. 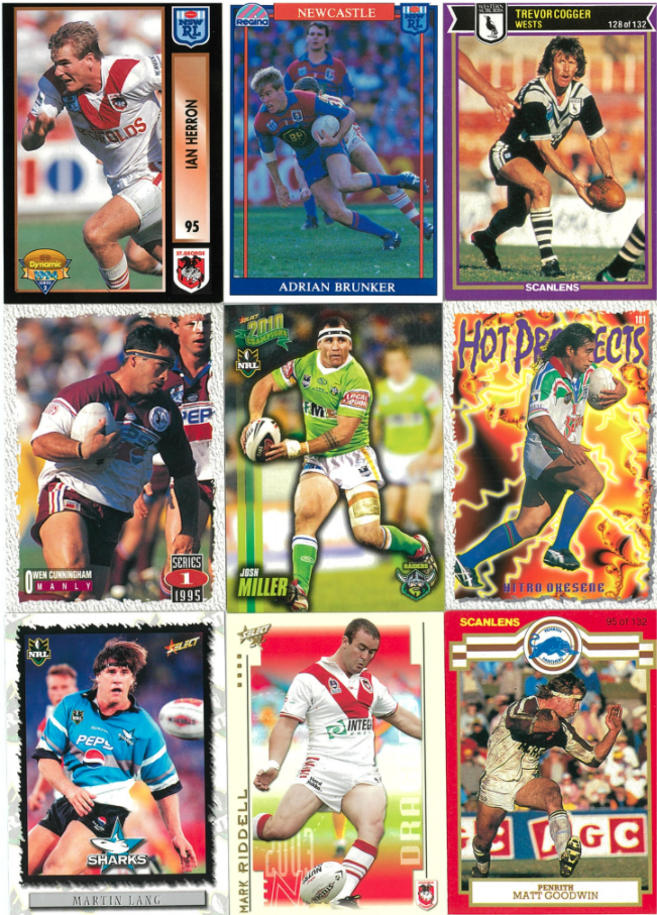 4. Paul Bowman (1995-2007: North Queensland)
Country raised players are among the game’s toughest and foundation Cowboy Paul Bowman was no different. Made of Newcastle steel and raised in North Queensland, the easy-going centre’s unyielding defence spanned 13 seasons.

And after helping restore Maroon pride following the embarrassment of 2000, he would eventually defy the odds and be carried into Origin folklore.

A bung medial cut short his night in the 2003-opener, but the cagey veteran still managed to drop a few Blues before coach Bennett waved the white flag that Bowman wouldn’t.

5. Matthew Wright (2009-18: Cronulla, North Queensland, Manly)
Back in 1991, Matt Wright must have been asleep in the womb when the Pace Fairy dropped by. That said, the three gears he missed made space for error-free genes and tradesman-like reliability.

Now with over 130 games under his belt, the unsung Manly utility’s name in conversation with 1990s mechanic-come-winger Craig Hancock is well deserved.

6. John Plath (1990-1999: Brisbane)
John Plath spent the majority of his playing days watching from the best seat in the house. Wayne Bennett’s Mr Fix-it of the 1990s made all but 50 of his 149 Broncos appearances from outside the top thirteen.

The understudy to everyone delivered from the pine in Brisbane’s first four premierships, and alongside the greats outside Suncorp Stadium, has done enough to warrant a bronzed bench.

Born within a stone’s throw of Lidcombe Oval, Cogger was more fibro than a Villawood house. No one represented the Western Suburbs Magpies in more grade games than Terry Lamb’s former halves partner.

With the locks of a 70s rocker, Cogger orchestrated a team of knockabouts in 161 top-grade matches. And while success was rare, shedding bark and raising a can with teammates carried just as much weight as his 35 victories.

8. Martin Lang (1996-2004: Cronulla, Penrith)
Martin Lang didn’t have a side-step, so learnt to compensate by running hard. The harder he ran, the more we winced. Tackle by tackle, year by year, and still, for a decade nothing changed.

Crash-Test-Marty was all recoil and whiplash and by his rules won every week.

Critics who claimed the Penrith premiership winner was one dimensional missed the point. He didn’t pass either – that’s why his Sharks footy card remains such a sort after collector’s item.

Mark ‘Piggy’ Riddell welcomes himself, just like he did when he jumped the fence and clapped his own try against North Queensland in 2002.

And if that wasn’t enough, his post-match reflection deserved bottling, ‘I had to compose myself once I jumped over, because I thought I was going to go arse over head. It was good fun. The crowd enjoyed it, the boys enjoyed it, and that’s what it’s all about.’

10. Matt Goodwin (1983-92: Penrith, Parramatta, South Sydney)
If the dissolved remains of Kerry Hemsley and the lunatic Danny Nutley were combined in a test tube, by sun up you’d have Matt Goodwin. And just like every good scientific experiment, the uncompromising bookend was precise and repeatable with every outing.

11. Hitro Okesene (1995-97: Auckland Warriors)
Bullocking Hitro Okesene was undoubtedly the Warriors’ first crowd favourite. Think Marty Taupau stripped back minus the cornrows and offloads. That was ‘Nitro’ Okesene – fired up in all his feral glory.

First impressions couldn’t have been further from the truth. The lightweight back-rower crossed within 90 seconds of his Raiders debut. But between then and his next try five years later was collateral damage that compounded until he could play no more at just 28.

But even on retirement, the hits kept rolling, “But talent, it’s overrated. If you’re willing to tough it out and have a go, you can play NRL.”

13. Owen Cunningham (1985-2000: Manly, North Queensland, Northern Eagles)
Unappreciated and undervalued – there’s no better compliment for a workaholic back-rower. Owen Cunningham was both and more. From taped head to rolled-up sleeves, the man better known as ‘OJ’ was everything right down to what Queenslanders claim the Blues selectors ignore.

A token Maroons appearance in his 11th year was just reward for the stocky Sea Eagle who never once shifted to reverse in 16 seasons.

So that’s that Roarers. Over to you, who makes your battlers hall of fame?