Newcastle Jets vs Melbourne Victory: Who’s going to win the A-League grand final and why

A titanic A-League grand final is here: Newcastle Jets versus Melbourne Victory, in a sold-out Hunter Stadium, with too many storylines to mention. But who will win? Roar writers Tim Palmer and Stuart Thomas disagree in their predictions… here’s why.

Why Melbourne Victory will win

Stuart Thomas
The biggest asset Melbourne Victory take into the A-League grand final on Saturday could be the win against Sydney FC last week.

They did it. They beat the best team in the league, the side looking for all three trophies and, most importantly, their nemesis. While not a miracle, they did pull off the toughest task in A-League football and sent the cocky Sky Blues, who claimed the ‘L’ word was no longer in their vocabulary, well and truly into the off-season.

Newcastle are, of course, a different proposition. The defensive resolve Victory showed in the second half against Sydney will need to be replicated if they are to have any chance of combatting the speed of the Jets’ wide runners and the frequency of their entries into the penalty box.

Defensively, it can be done. If the back men can hold their nerve in the absence of Rhys Williams, there is a propensity for Victory to capitalise in other areas of the pitch.

For Victory to win, Besart Berisha must stay in as forward a position as he can. The secret to the wins against both Brisbane and Sydney was quality centred balls from the edges of the box created by the wide runs of Leroy George and Kosta Barbarouses.

If Berisha moves higher up the park towards the midfielders as they advance the ball, he blocks the distribution space for George, Barbarouses and James Troisi and becomes more of a hold-up forward.

This condenses the space ahead of the back four and reduces the speed of the attack. The ball may still make its way wide, however the chance is often missed based on the time it takes to recycle from the hold-up play.

In essence, it becomes about speed for Victory. If Berisha resists the temptation to come looking for possession higher up the pitch and the attacking men are prepared to run as they have the last two weeks, the quality of the crosses they have provided could dissect the Jets at the back.

Keeping Newcastle occupied at the back in this way is the best strategy in terms of somewhat blunting the frequency and speed of the Jets own attacking raids.

It’s not easy, but the Victory win if they execute the plan to perfection. 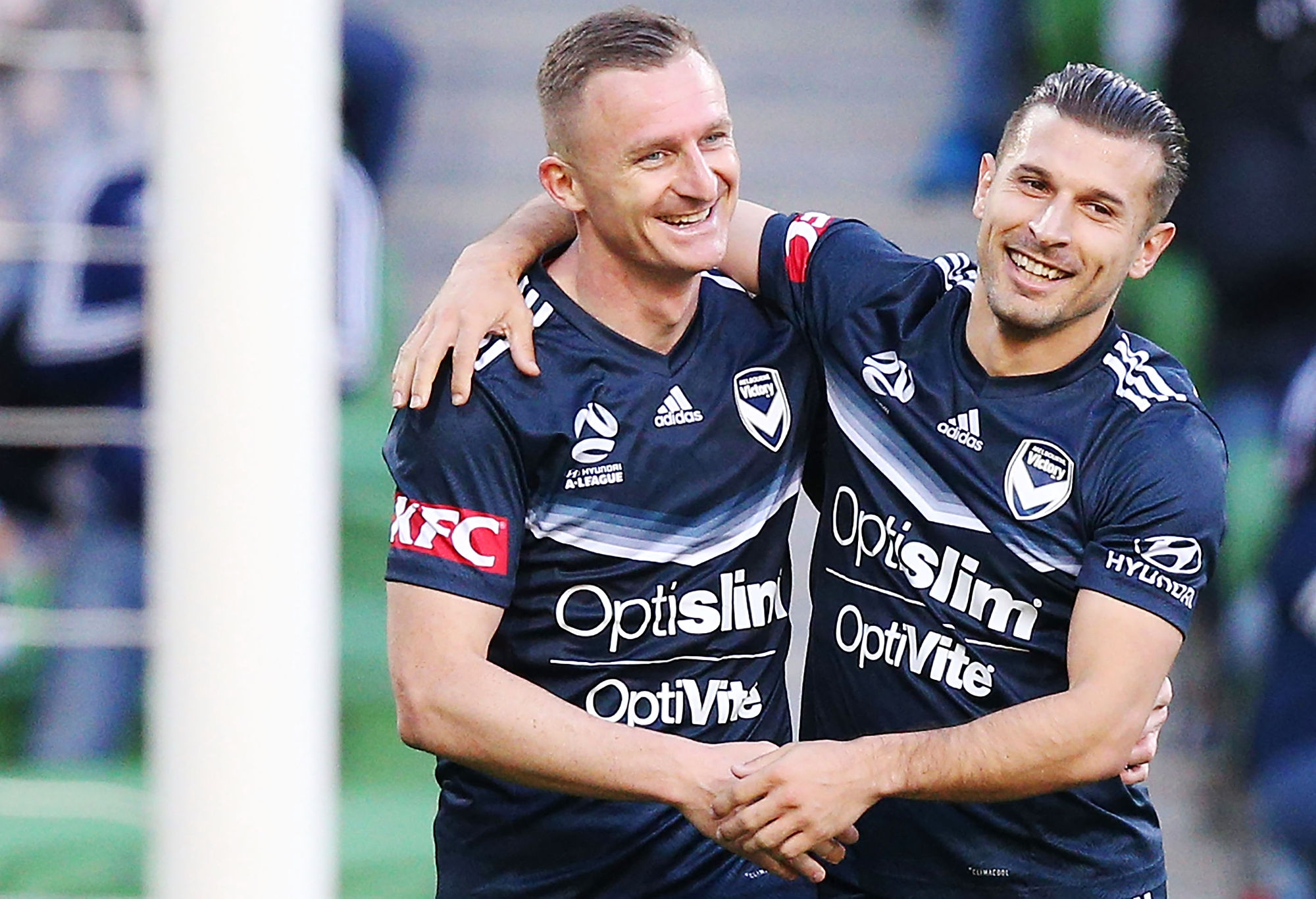 Why the Newcastle Jets will win

Tim Palmer
The Newcastle Jets are riding an exhilarating wave all the way to the grand final, and to complete a remarkable turnaround, they will need to excel in two key areas.

Firstly, in order to score goals, they will need to be able to play beyond Victory’s pressure. Kevin Muscat’s go-to tactic in finals is to press high, evidenced by the semi-final win over Sydney FC. The side closed down ruthlessly in transition moments and prevented Sydney from playing forward from their own back third.

The Jets will likely try to bypass the Victory pressing by playing longer balls towards the front three, looking to skip over a crowded midfield zone by either playing into space in behind the Melbourne defence or looking to find Roy O’Donovan to hold the ball up high up the pitch. If in doing this, the Jets can break past the Victory pressure, they will create goalscoring opportunities.

Where the game will really be won or lost, however, is in counter-attacks. This is where both teams excel – quick, direct moves of five or fewer passes, getting to goal as quickly as possible.

The Victory have lightning speed in transition, with Leroy George, Kosta Barbarouses, and Besart Berisha a devastating combination on the break.

The Jets will need to ensure that they avoid turning the ball over inside their middle or back third in moments where their defence is spread, and that the central midfield pairing, likely Steven Ugarkovic and Riley McGree, stay in position in front of the back four when the Jets have possession, so that there is protection when the ball is turned over.

In this respect, the eagerness of McGree to dart forward into attacking positions, while effective going forward, could be problematic. Ernie Merrick might also ask his fullbacks to stay deeper, to reduce the space available for the Victory wingers to break into.

Yet for all the tactical schemes and tweaks possible, the reality is the Jets have made it this far by playing their own game and not being afraid of any opponent. That attitude, enthusiasm, and energy will see them carry the momentum through to an extraordinary Championship win.