Downsey
Roar Pro
1st May, 2018
15
Join the conversation
Advertisement
Write for The Roar

As an unapologetically one-eyed Dockers supporter I never thought I’d debase myself by interviewing an Eagles fan, but in the spirit of last weekend’s Western Derby I’ve sucked it up and done it.

I’ve taken myself off to a Perth suburb called Jindalee. Jindalee is known as South Geraldton to the locals, which basically means it’s too far north of Perth for any civil person to live. I actually live just down the road and, to be honest, I’m pretty sure if I ever had to complete a footy personality test, ‘civil’ would not be one of my top ten characteristics.

My short journey is to interview Eagles supporter Rob M. This young fella is about as West Aussie as it gets. Two 4WDs are parked in the driveway. The spare tyre cover on one of them reads ‘The Fish Whisperer’. I find out later that he caught some tailor on the weekend and occasionally bumps into Jeremy McGovern when they’re pulling their cray pots.

I rock up to Rob’s joint deliberately wearing a Dockers shirt. He either doesn’t seem to notice or isn’t taking the bait.

I set myself up at the dining table and make a drink. Rob sticks with his water.

Unexpected. Perhaps he’s been on a five-day bender?

The Melbourne versus Richmond game is playing in the background. Over the course of the interview, Rob’s eyes drift to the game. At one point he tells me that he hopes Richmond flog Melbourne. I don’t bother to ask why; I figure it’s an irrational Eagles thing.

Rob’s immediate family isn’t as footy fanatical as mine. It’s more so him and his cousins who follow footy, having all played together at Wanneroo Amateur Football Club as kids. He remembers going to Chris Mainwaring camps and loving it. In the WAFL he supports West Perth as they draw from WAFC, but he doesn’t follow that league closely. It’s the West Coast Eagles that have his heart, albeit misguidedly. 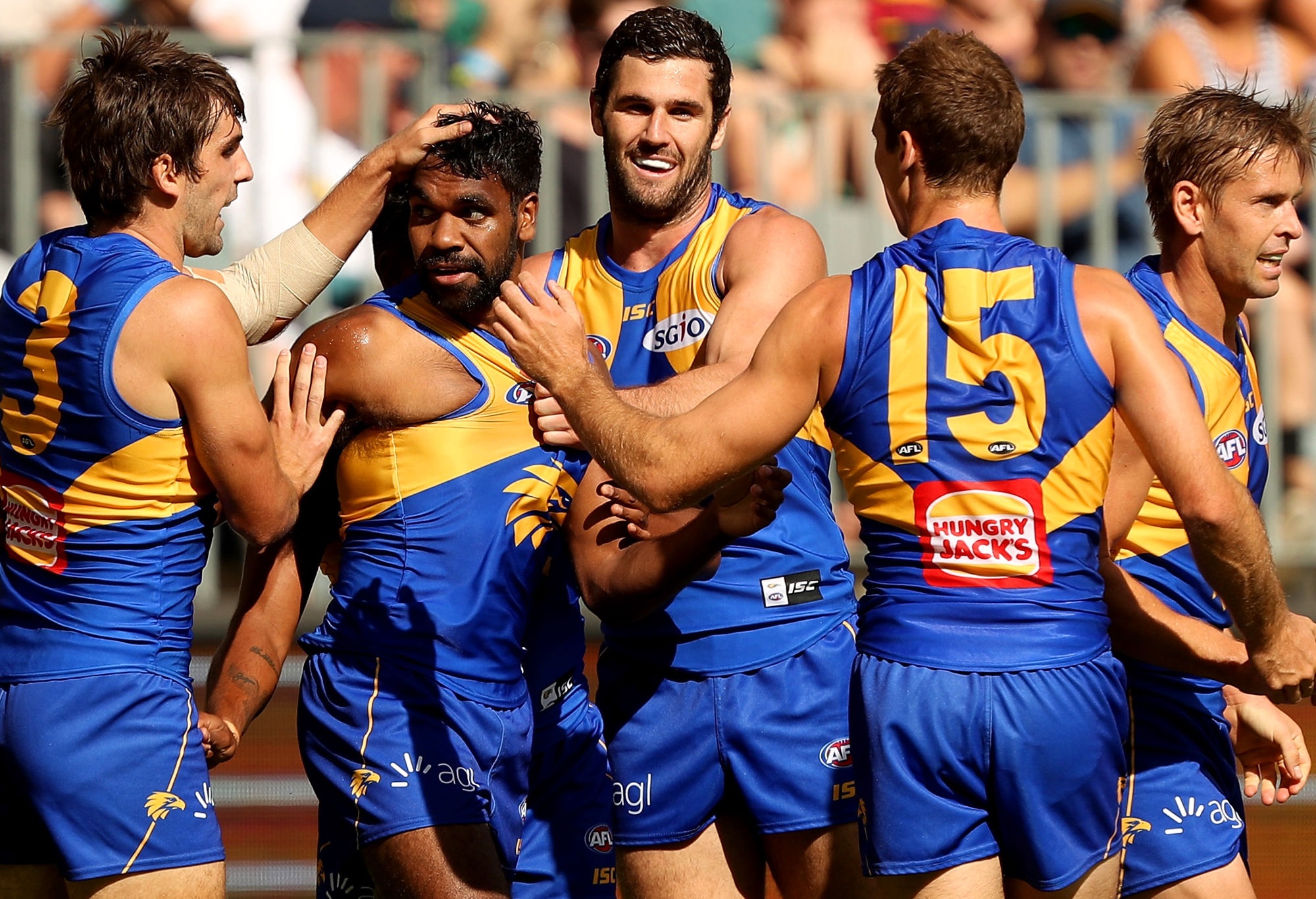 I ask him if he still plays any sports and he replies, “Yeah, I still fish”. I laugh because I wouldn’t have classified fishing as a sport. He’s offended by this and corrects me with, “It’s one of the most dangerous sports in the world!”. I raise an eyebrow and keep going.

We cut to the chase and I get to his favourite all-time Eagles player. Without the slightest hesitation, he tells me it’s Ben Cousins. My shocked look prompts him to justify himself.

“He was so dedicated. What he put into his footy and how he trained was just awesome. He was the best all-round player we’ve ever had.” He’s on a roll now.

“I still remember when he came back from his first break from footy for drug rehab and he had 30-something possessions and was best on ground. He was only on for three-quarters of the game and he absolutely carved it up.”

He further demonstrates just how West Aussie he is when he admits, “I wasn’t at the match. I was in Bali at the time”. He regales me of another time he was in Bali with his mates and they decided to do ‘Kennedy Shots’. This was back when Kennedy was in Coleman form so I suspect many shots were had.

I explore his hero worship of Cousins more. “Isn’t his drugs history offputting?” I ask. Rob explains it to me in the way only an Eagles supporter can.

“The fact he could go out and do drugs all night and still have the highest amount of possessions showed you how good he was. It wasn’t like they were performance enhancing, so imagine how good he’d have been [if he wasn’t high].”

The logic. It’s hilarious and I love it. 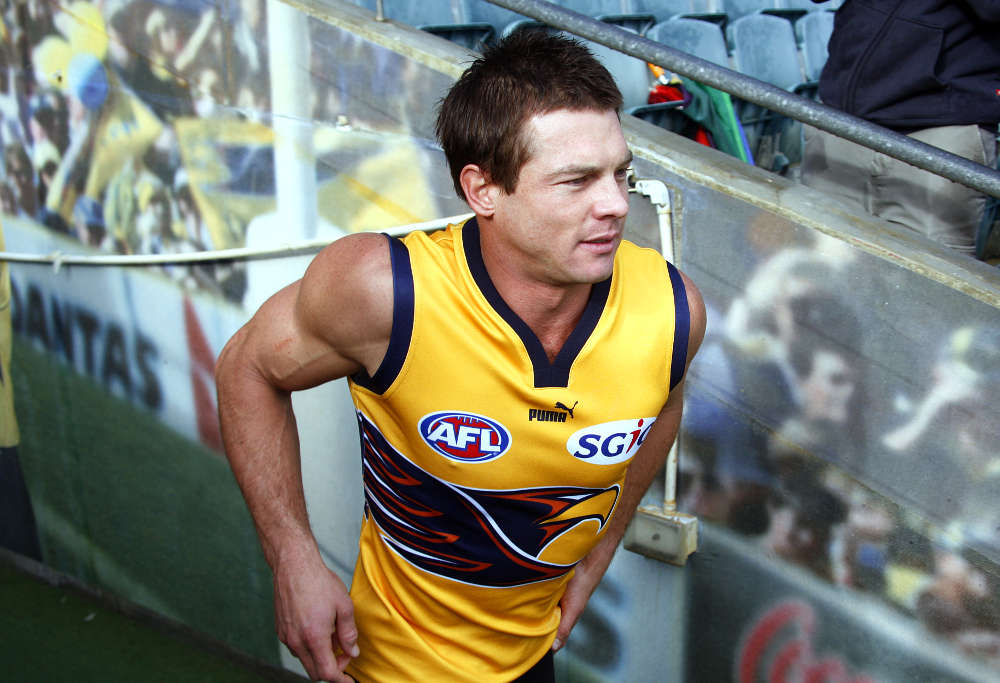 I have to get a grip on myself. I’m ashamed to be enjoying this interview with an Eagles person. Plus, we probably shouldn’t be so flippant about drug addiction.

I switch to who he has a current man crush on. I use ‘man crush’ to mock him, but he ignores the dig and jumps straight in with, “There’s so many!” He prattles off names, “Luke Shuey. Jack Darling. Josh Kennedy”. I swear when I hear Kennedy’s name. He kicked six goals in the last derby.

Rob is also super impressed by Brad Sheppard. “He’s our young defender and he goes so hard at the ball. He reminds me of Beau Waters and all the hip and shoulders he did. He concussed so many people.” I’m disturbed by the admiration in his voice.

West Coast supporters. There’s something a little hinky about their moral compass.

On this point I decide to get his opinion on why Eagles fans are notorious for booing. He questions this.

“Are we notorious for booing?” I nod vigorously as if it’s definitely a thing and not just my own unfounded accusation. He has a go at explaining it, “I actually think it’s because we got noted for booing and given such a hard time for it, so we decided to boo more in retaliation.”

I suppose I can relate to this; sticking my middle finger up at the haters. I’ve lived with it since I became a Dockers Quay Club member, defying my family’s West Coast tradition. The more they gave me a hard time about it, the more I embraced Fremantle. 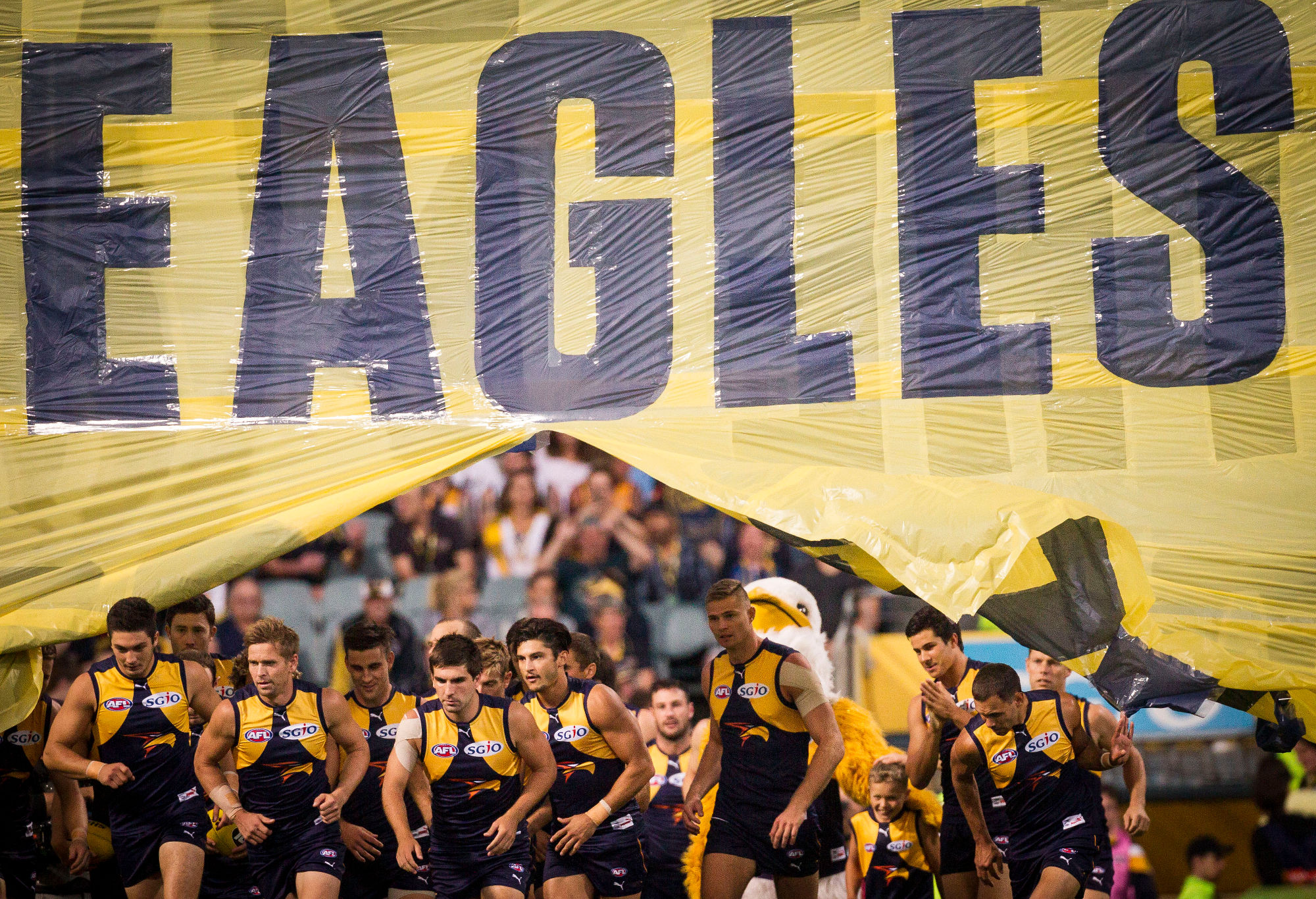 Rob does admit that Eagles fans are pretty biased when it comes to umpiring, but he softens this with, “That’s like any team, though”.

He also describes a time when he was at a Collingwood game in Melbourne and he had old ladies – “Lovely little old ladies” – call him names I couldn’t possibly repeat on The Roar, as if this somehow makes his side better. He’s clearly unaware of how vicious the chardonnay mafia can be.

My drink is getting low and Rob’s eyes are drifting more often to the game on the TV, so I get on with the important questions. He’s comfortable with West Coast’s start to the season and thinks they’ll end up in the top eight.

“What are we now? Four wins, one loss. We’ve only got to win 12 games, so I reckon based on this form we’d finish between sixth to ninth.”

I hate the thought that the Eagles will finish in the top eight. Boo!

He’s not so sure about the derby, though. His answer is anti-climactic.

Boring. He does, however, tell me his lowest time with the Eagles was the period between 2012 and 2016 when the Dockers won six derbies in a row. Of late his team has won the last five, and it reminds me how desperate I am for Fremantle to win the upcoming one. I’d eat my own keratin for it.

To finish off I give Rob a frivolous fish question seeing as he’s a keen fisherman. If the Eagles and Dockers were fish, what would they be? He goes with sailfish for the Eagles because they’re the fastest fish in the ocean. Predictable.

I leave Rob to enjoy the rest of the match; the score is still close. As I pat his cranky cat, Bernie, on the way out, he tells me, “Good luck”. He pauses and adds, “You’ll need it”.

I think about Michael Walters’s five-goal romp and Nat Fyfe’s 43 possessions last weekend and think to myself, “Nah, mate. Your team needs it”.

I smile and head home, proud of how civil I can actually be.

Hub turning into a horror for Eagles

West Coast’s Queensland AFL hub is quickly turning into a horror show for the premiership fancies after a 30-point loss to Brisbane on Saturday.

Hub turning into a horror for Eagles

AFL quarantine hub life has got off to a poor start for West Coast, with the Eagles copping a shock 44-point belting by Gold Coast on Saturday. 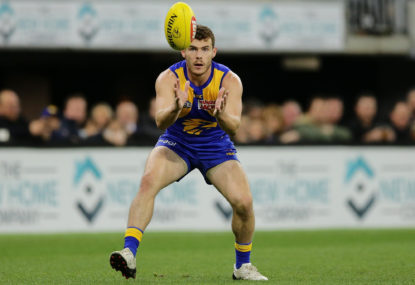