Tim Palmer
Expert
3rd May, 2018
9
Join the conversation
Advertisement
Write for The Roar

This season, there have been only two constants in the Newcastle Jets starting XI. One is captain and A-League legend Nikolai Topor-Stanley, the other an unheralded 23-year-old who has been a key cog in this remarkable fairytale – midfielder Steven Ugarkovic.

Ugarkovic has started all 28 matches, and was substituted in just three, falling only 47 minutes short of playing every minute of the season (assuming he plays the full 90 in Saturday’s grand final).

It is a remarkable achievement. It is also a story worth remembering when talking about Australia’s youth development pathways.

For while Ugarkovic matured as a person during his travails in Croatia, he was actually developed as a player in Australia’s NPL, having progressed through the youth teams at Sydney United before moving to play in Marconi’s Under 18s squad.

It was here Ugarkovic played under James Lambert, U18s coach at the time and now an experienced technical director and pro licence holder. Even as a teenager, Lambert saw Ugarkovic as a player who “gives a team balance and leads by his positive actions”.

“Steven was someone that would follow instructions for the purpose of the team – a good way to value his ability is to take him out of your team, as he makes 11 players become a team,” says Lambert.

That is a fitting description of Ugarkovic’s current contribution to the Jets, but it is also worth noting the role Lambert played in developing Ugarkovic as a midfielder.

“Steven excelled in this,” says Lambert

“He thrived on practicing playing through pressure and his confidence grew.

“Mentally he was strong, he was able to keep a level head through all situations. Even on days the result didn’t go for us he was able to speak about the positives and if we met the pre-game objectives.”

Lambert also supported Ugarkovic off the pitch. To this day, the coach still clips and collates key video footage of his performances, continues to support Ugarkovic.

Other coaches, too, have played a role. Although Ugarkovic played less in Croatia, he was used in new positions – a full back, lone 6 and on the side of a midfield diamond – further evidence of his aforementioned coachability, and adaptability.

Similarly, Ernie Merrick has been hugely influential on Ugarkovic, with the Jets’ coach surely developing the midfielder this season into a candidate for the national team. After all, Ugarkovic has been one of this season’s standout players, an everpresent cog in one of the league’s top two sides.

The fact that Ugarkovic is one of the few interchangeables in this team is interesting, because often teams that do a rapid turnaround – as Newcastle have done in going from last to the grand final – do so with a consistent starting XI.

The Jets have lost the likes of Ronald Vargas, Andrew Nabbout, Ivan Vujica, Ben Kantarovski and Roy O’Donovan to injuries and suspensions at different points and for varying lengths throughout the season, actually rarely keeping the same starting team on the pitch from week to week.

The true rocks of the team are Ugarkovic, Topor-Stanley and Nigel Boogaard: the ‘spine’ of the team at centre-back and defensive midfield. Keeping these players in defensive-minded positions has maintained a consistency that would otherwise have been lacking, and it’s no coincidence the Jets’ lowest period, towards the end of the regular season, came in Boogaard’s injury-enforced absence. 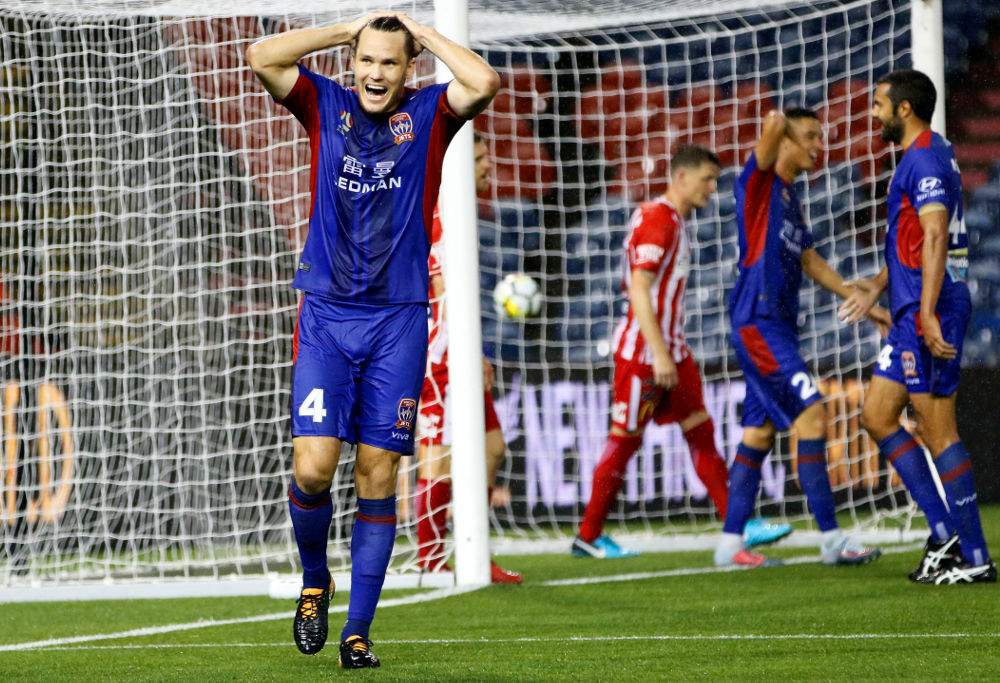 Those three work particularly well together because Ugarkovic has a keen understanding of how to protect the back four.

The Jets ostensibly play with two central midfielders in their 4-2-3-1, but Ugarkovic is nearly always the one that gives balance, knowing when to sit and hold if other teammates move forward around him. He also knows how to position himself to give balance going forward – staying free between defenders, providing an option to play forward through opposition lines, and having the ability to protect the ball or face forward even under pressure.

In these respects, Ugarkovic might just be the key player in the decider.

The Victory will certainly break quickly in transition, and close-down high up the pitch. Ugarkovic will need to both protect the defence from these counter-attacks, and help Newcastle play out under pressure.

He is, and will be, the Jets’ equilibrium, and the balancing player who can tip an evenly-matched grand final in his team’s favour.