How Schmidt beat the All Blacks: What makes a champion coach?

When Ireland were being criticised for their patterns of play two years ago, Joe Schmidt stuck with his players and his structured style. Two years later the results of said trust can be seen to be yielding a rich return.

Jones won’t change his style, but he changed his players reactively for the game of the Six Nations, whereas Schmidt did not. While the game was over at this point, the last 20 minutes with England’s distribution dynamic at 10-12 and with forward momentum showed how potent their attack can be.

This begs the question. What makes a great coach?

We can look back through the greats of the game. Steve Hansen, Wayne Smith, Graham Henry, Rod MacQueen, Clive Woodward and, to a certain extent, Joe Schmidt. What is it about them that drove their teams to the top table?

There are many, and no coach is the exact same. Yet in two of the coaches above, and the only two coaches who have been my heroes, they share very similar traits. These coaches are Joe Schmidt and Rod MacQueen.

There is one trait they share that is for me the most important and separates the champion coaches from the good.

The reason why I idolise MacQueen and Schmidt originates eight years ago at the Royal Military Academy Sandhurst, Camberley, England. 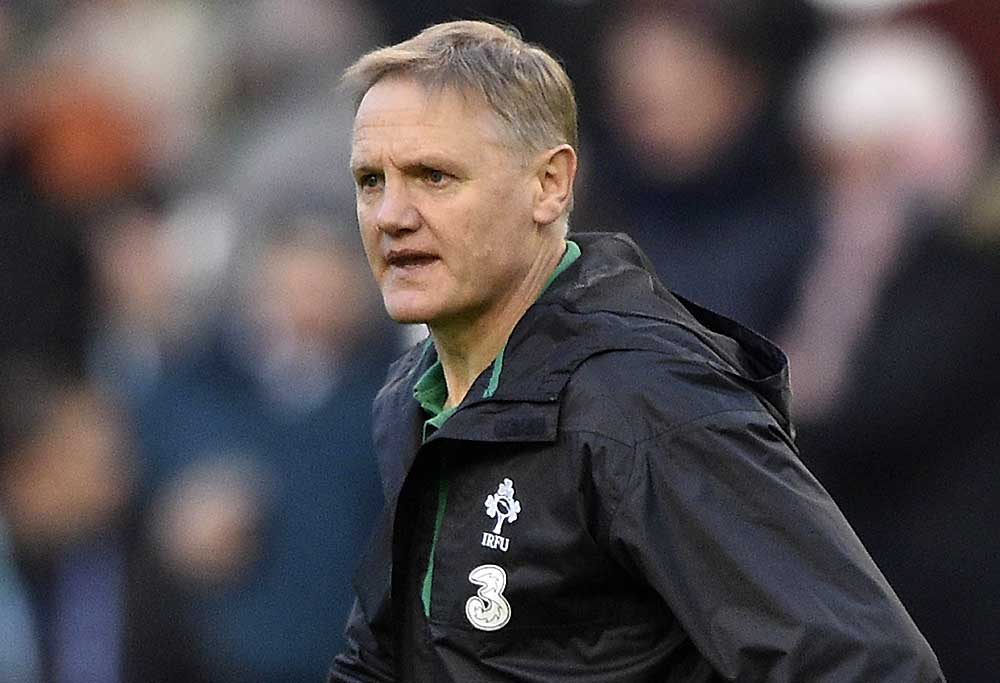 It was a leadership day for the boards of FTSE 100 companies, who we were assisting in command tasks. I got talking with one executive about our shared love of rugby on the bimble in between, and while not for rugby, he recommended a book that he thought I should read as a military man – a book that he himself used for his leadership and strategies within the workplace to beat the opposition.

That book was The Art of War, which was written over 2000 years ago by a Chinese general named Sun Tzu.

I’ve written a series of articles about the All Black weaknesses that you will get a teaser of today that will make you realise just how much the philosophies of this book changed my views on rugby. It completely opened my eyes.

Originally I believed it an absurd concept that the concept that principles and philosophies of war written 2000 years ago would be relevant in today’s age. My 20-year-old self couldn’t have been more wrong.

I read the book, face-palmed myself immediately, and then began applying the principles to rugby, thinking myself rather clever and innovative. When I was told by my Australian coach, a fervent MacQueen fan, that the style of play and preparation espoused by MacQueen was based upon the philosophies of Sun Tzu to a near fanatical level, I deflatedly watched multiple MacQueen Wallabies games and read his autobiography, the combination of both making me a very big fan.

Attacking in numbers, flooding a channel and overwhelming through speed, as shown in Brumby mode, is based on Sun Tzu’s “Attack like water through valleys”. Relentless and focused on one point of the defence.

His focus on analysis, knowing how the opposition team like to play and then attacking the individual opposition players’ strengths and weaknesses, was pioneering at the start of the Super 12. Again, a nod to, “If you know the enemy and yourself, you need not fear the result of 1000 battles”.

His keenness on speed and shifting the point of attack to the channel most exploitable was the reasoning behind his fanatical determination to improve the fitness and handling of his Wallabies. Both derived from “Appear at points which the enemy must hasten to defend; march swiftly to places where you are not expected”.

He has structures and processes based on detail and sequences in play, but he will focus on the opposition to find out everything he can about them as well as knowing his own team’s strengths inside out. He then, using those strengths, has multiple ways of playing within his structure to target those weak points and will customise a game to exploit these accordingly.

Rory Best
This in itself is commonplace among rugby coaches. Analysis and video footage/GPS data is rife within teams. However, something Rory Best said at the end of the England game, is very telling.

“We just had to make sure we made every moment count, every single moment, build the moments on top of each other and try to build as close to a perfect 80 minutes as we could,” he said.

Sun Tzu said, “Opportunities multiply as they are seized”. In other words, moments taken lead to more moments. This is something that I’ve coached since I started coaching. When you have them under pressure, the best thing to do is to hit them before they’re prepared again.

This principle is something that we saw in 2016 when Ireland beat the All Blacks and then said Irish Influence on the Lions tour.

This is not an analysis piece on the All Black weaknesses. Those will come later, but this emphasises my point and the principle behind this statement under Schmidt.

Here are two All Black weaknesses in defence (out of five) that I have identified.

Weakness 1
The All Black defence has a gap in-between its shoot and drift portion that is exploitable to the flat pass. 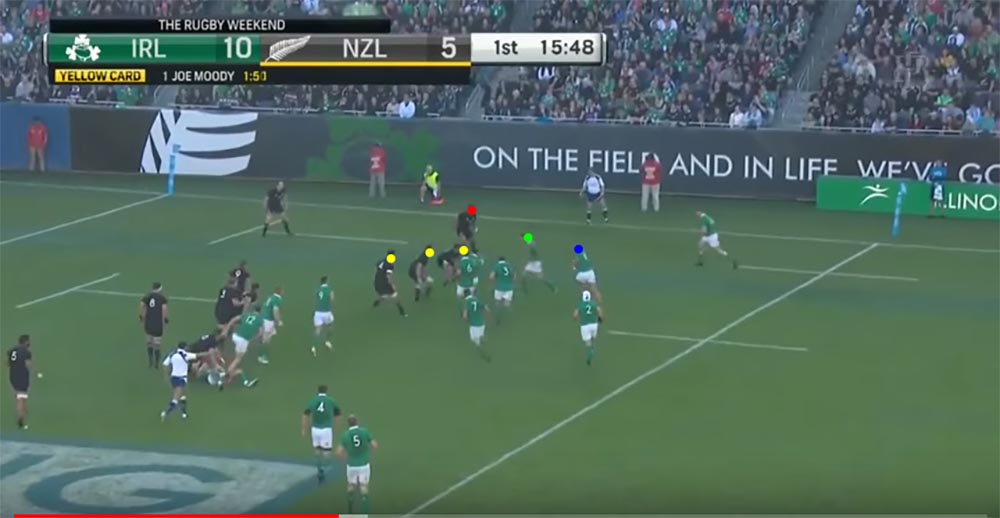 With the flat pass from Jonathan Sexton and the screen option behind, Sexton commits the last man of the three man shoot portion extending the gap, with the screen option keeping the drift wary and creating space for the strike runner. 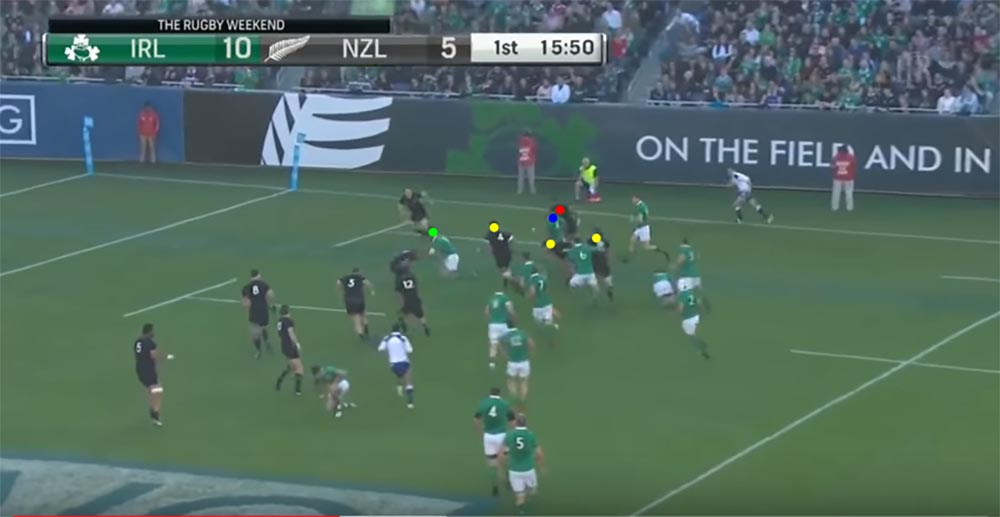 A try was scored on the next phase from attacking the fringes on this break. Another All Black weakness.

Weakness 2
In multi-phase defence, their pillar defence (three guards) are spread. Be it in the open or on the blind to overlap for the counter. And Aaron Smith is part of the pillar defence to exploit turnovers quickly. 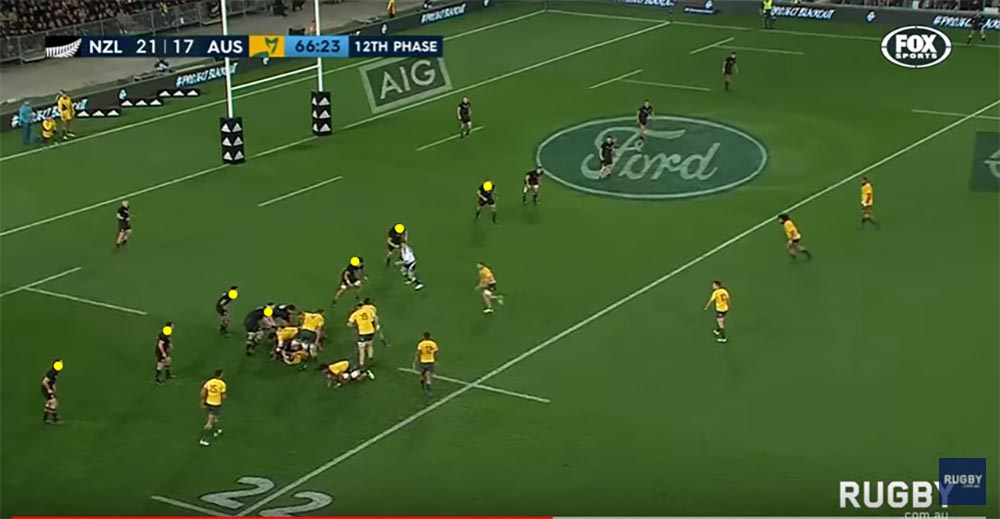 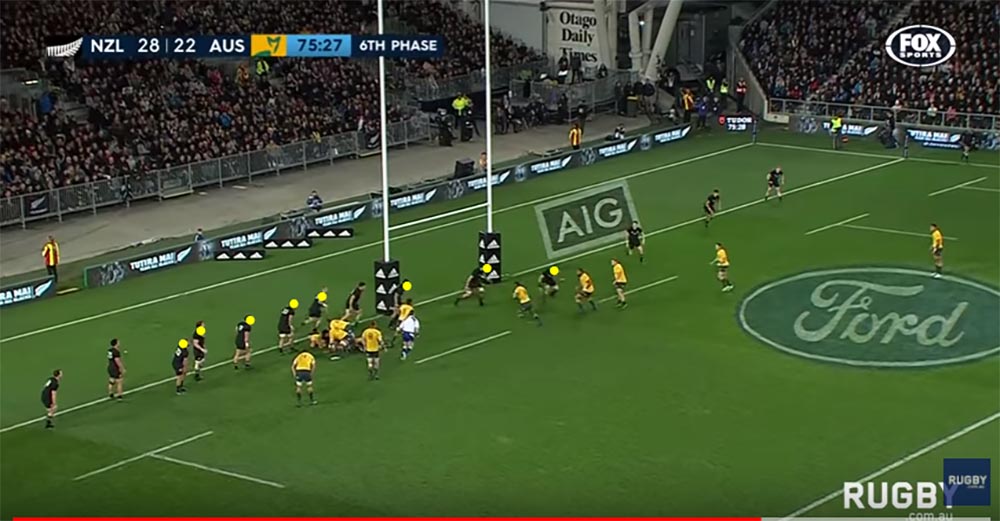 Now we’ve seen examples of these weaknesses. The above two sequences resulted in tries and are basically MacQueens “Attack like water through valleys” ethos, straight from Sun Tzu.

Exploiting the All Blacks through combinations
Ireland’s patterns were altered by Schmidt to exploit these, but they also combined them.

Using the weaknesses highlighted, Conor Murray and Sexton targeted them exactly how they did in Chicago. The sequence of play was identical. First with the shoot gap. 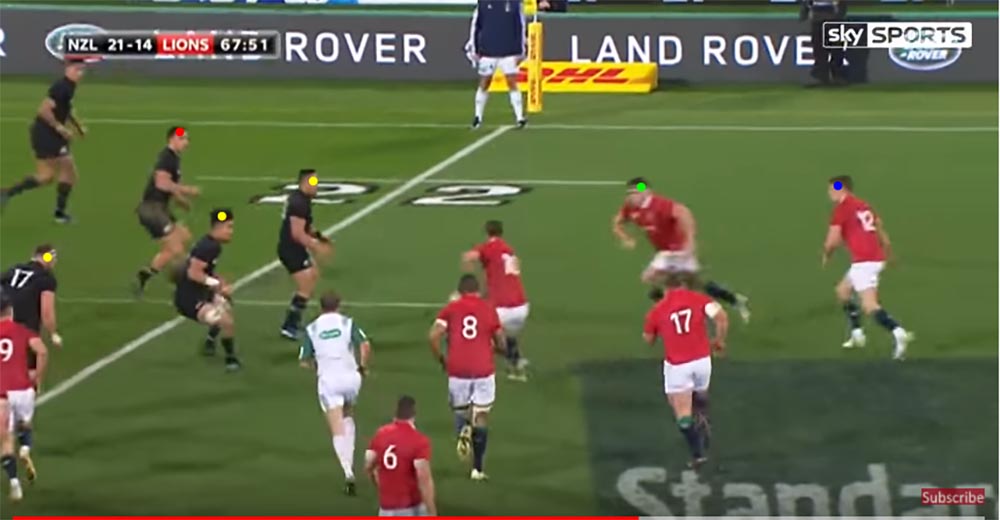 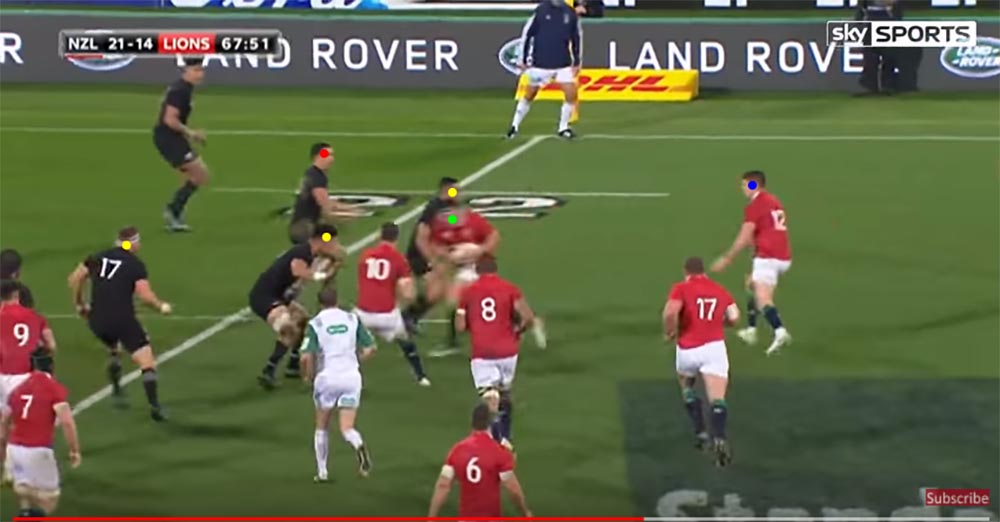 Then the pick and go. 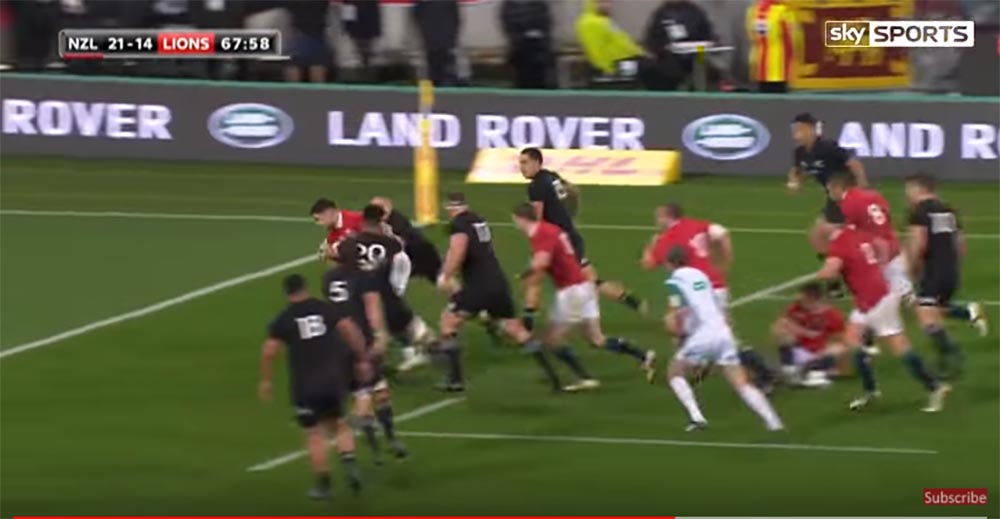 There may only be three or four weaknesses to a sides defence, but they can be combined for a lot of combos.

Once they had the advantage, they pressed home with another quick decision to target another known weakness when the All Blacks are still in disarray.

We can’t be sure, but for me these are Sun Tzu principles.

In the book, Sun Tzu referred to the readers as students of war. This is under the realisation that you can never stop learning. Never stop pushing for those fine margins – details that add up over the course of a game can be the difference between winning and losing.

For the Irish, it’s ensuring you have 10/10 rucks secured with your breakdown rather than 8/10. Over the course of a game, think how many times those two rucks can cost a team.

For MacQueen, it’s not stopping the attack when you have the pillar defence down and keeping with Brumby mode to engage before they even can tackle.

MacQueen and Schmidt had and have this quality to keep bettering themselves along the lines of Sun Tzu as well as their team. The lessons learnt from the same principles is one of the best qualities that makes a champion coach.