Any town that is home to musicians as brilliant and genuinely authentic as James McMurtry, Bob Schneider, David Ramirez and others already has a whole lot going for it.

But now Austin, Texas has another reason for people to sit and up and take notice – it’s one of the founding cities for the USA’s promising new professional rugby competition, Major League Rugby.

It is well understood by anyone with a keen interest in the global game that rugby in the USA has seen more false dawns than any Auckland Blues fan cares to remember over the last two decades.

But at the risk of consigning this article to the pile of ‘just another in a long line of pieces talking up American rugby’, there is something brewing with the new competition that sets it apart, and which promises to progress rugby in the US beyond the level where it has stagnated.

By way of background, on an Otago University tour to the US in the early 1980’s, myself and my teammates encountered wildly extravagant refereeing, an exposed 18-inch diameter steel pipe on a playing pitch covered with a towel deemed sufficient warning for us to keep clear, and a walkway/entrance to a clubhouse that was framed with a thriving Marijuana plantation.

At the time, women’s rugby seemed stronger and better organised than the men’s game, which battled to overcome the issue of too many players, fine athletes perfectly suited to the sport, taking up the game too late to understand its intricacies, and to react instinctively in broken field situations.

In many respects, rugby has come a long way in the US since then, but by too many other important metrics, it hasn’t really come very far at all.

2016 saw the launch of a five-team professional league, ‘Pro Rugby’, which disappeared as quickly as it came in a fog of confusion, political machinations, claim and counter-claim. But even if initial scepticism proved to be well founded, there was also agreement on the part of many rugby people in the US that a doorway had been opened for others to walk through, should they get the model – and the finances – right.

In that respect, Major League Rugby is being built from solid financial foundations, aligned with a strategy to ensure that it rises organically from the existing grassroots of the game. Austin Elite co-owner Richard Osborn explains; “We’re a single entity group, a closed league with no promotion or relegation. And we’ve invested in the future of US rugby, not for the expectation of turning a quick profit.”

“Here we’ve come straight out of the Austin Huns Rugby Club and the name ‘Elite’ refers to all of the local amateur clubs feeding into the professional team. The Glendale Raptors are owned by the city, and the other franchises are mostly owned by investors who, like us, are rugby people.”

Doing the heavy lifting in Austin is Thierry Daupin, who has landed from France via Hawaii, with a very clear vision for the sport not only in Texas, but beyond; “How we build the competition is very important. If we want it to be exciting for the audience we need to have parity between the teams and already, after only two or three rounds, we can see that the matches are exciting and close.”

It a classic equalisation scenario, which some US sports excel at, with the league, not the individual franchises, paying all of the player’s salaries, capped at $350,000 in year one.

As for the rugby itself, now three weeks into the season, not everything has gone the way of sides favoured to do well, highlighting the evenness of the playing rosters and the impact a couple of key injuries can have on squads that are still finding their feet as new entities. Crowds are patchy although TV coverage is surprisingly strong for a fledgling competition.

CBS Sports rugby commentator Peter Steinberg notes that the matches he has called so far have been highly competitive, if falling below the standard that everyone aspires to: “The challenge will not be how do the best teams do, like Seattle, it will be how the teams that struggle the most perform. Right now everyone is learning and some are ahead and some are behind, but the success of the league will be evident when all of the teams are run as an elite sports organisation, and at this stage, we are not there yet.”

It is this very aspect that fascinates. Despite intense interest from all major overseas competitions, the organisation is in no hurry to run before it can walk, with franchises in New York and Dallas slated for inclusion next year, to bring the total number of competing teams to nine. Playing, coaching and refereeing standards must be raised first.

“It’s required by the league that each franchise has an academy”, Osborn explains. “This is important because it keeps us connected to our local clubs and provides a pathway for the best local players. It also provides a database from which all of the professional clubs recruit. And because the college game is taking off this provides the possibility for a future draft into the academies.”

Also key is the relationship with US Rugby, and while the players are all contracted to the league, a mutually beneficial co-dependency presents itself. Daupin explains further; “As soon as the USA performs well in XVs, like Japan did at the last World Cup, that would be phenomenal for the sport, and obviously very beneficial for our competition. If we can write a great story together with US Rugby then we will.”

Osborn is keen to emphasize the point; “People should understand the root desire of why this league came about, which is for the USA to perform better on the international stage. This will obviously help return our investment faster in a financial sense, but the real investment is in the growth of US rugby as a whole.”

It is here where the potential of the model becomes truly apparent. Unlike the English Premiership and French Top 14 where the club game is totally self-serving, or SANZAAR, where the national unions control all of the game in order to protect their income generating Test sides, but at a cost to their franchise competition ‘Super Rugby’ that is almost becoming too heavy to bear, Major League Rugby has identified the perfect happy medium.

“For example, we have looked closely at what makes New Zealand rugby so successful, at what works in other places, and we have also seen all the mistakes”, says Daupin.

As a result, Major League Rugby runs as a private professional competition, employing Dean Howes as commissioner, (who was also at the forefront of the growth of Major League Soccer (MLS) in the USA), who brings relevant business and marketing expertise, and an understanding of the peculiarities of the US sports market.

This allows US Rugby to focus on the amateur game, seven’s rugby, women’s rugby and the international side, with potential for the two sides to intersect on development pathways.

The contrast with SANZAAR (admittedly more complex because there are multiple national bodies) is revealing. While Super Rugby is subject to any number of constraints and conflicting objectives, Major League Rugby can simply get on with being the best competition it can be.

Also looming on the horizon is the potential for the USA to host a Rugby World Cup, with all participants acutely aware of how much the 1994 FIFA World Cup accelerated the growth of soccer in the US.

World Rugby head Brett Gosper recently made all the right noises about the prospect of the event coming to the USA as early as 2027, and if ‘tier two’ bedfellow Japan makes a good fist of hosting next year, it seems inevitable that it will be a matter of ‘when’ as opposed to ‘if’ for an American iteration. 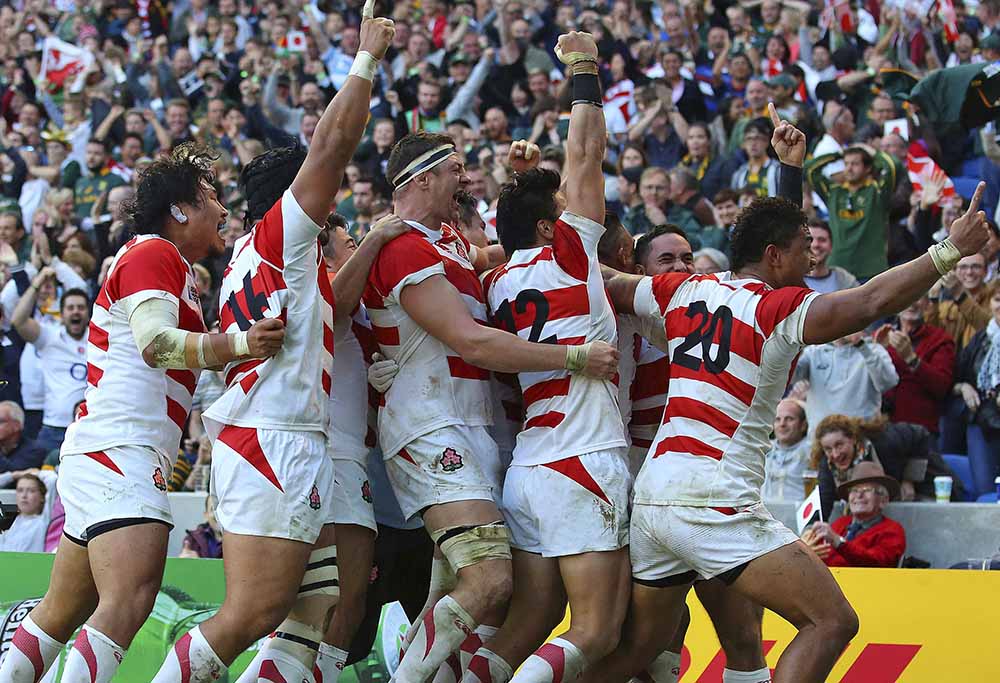 Daupin and Osborn are clearly excited at that prospect but, again, have their feet firmly planted on the ground, seeing 2031 as a more realistic proposition.

“Remember that we’re at a disadvantage compared to traditional countries with their rugby specific stadiums. If we rely on existing stadiums there will be timing clashes with MLS and the NFL”, says Daupin.

“We need to develop our own stadiums. MLR franchises to all own or at least have control over their own facilities, that needs to happen first,” adds Osborn.

The question that remains is the same one that is always posed – when is rugby in the USA finally going to fulfil its potential?

Interest in the answer is now two-fold. In terms of the USA Eagles, a sustainable and developing domestic professional competition, with sound junior pathways below it, will surely translate into improved outcomes at the top level, but only the blindly optimistic would envisage a transition to ‘tier one’ Test status any time soon.

Of wider interest is the commercial potential, not just for the owners and investors in Major League Rugby, but all of the world professional leagues who are constantly looking to tweak their models – in the case of Premiership Rugby and the LNR to stay dominant, and in the case of the Pro 14 and SANZAAR to stay solvent and relevant.

Expect in the short term for one-off fixtures and exhibition games in the USA to continue, as the big players continue to spar, all the while watching for Major League Rugby to grow and consolidate.

A successful league would present an attractive proposition for a cashed-up Premiership Rugby or LNR to purchase a stake in, or even swallow up whole.

But a strengthened league would also lessen the prospect of single franchises joining either of the UK leagues, or a west coast franchise being included in any future Super Rugby expansion. The more successful the domestic league, the more the US takes control of its own destiny.

Thus a more likely outcome is vertical consolidation within the Americas, Major League Rugby enhancing its own identity, with the prospect of a whole conference becoming part of some future champions cup or similar, perhaps affiliated with either SANZAAR or the Pro 14.

That’s a prospect that, for now at least, seems far distant from the Round Rock complex just north of Austin, Texas, where this week the Elite improved their standing to 1-2, disposing of the NOLA Gold by 30-17.

The ‘big picture’ corporate negotiations will come later. In the meantime, there is a league to be built and games of rugby to be won.