Nic Naitanui cannot - must not - be acquitted for his heavy tackle

Of all the hysteria generated in an average AFL season, the white noise over Nic Naitanui’s one-week suspension is up there with the most nonsensical. Should the tribunal somehow take leave of its senses and acquit the champion West Coast ruckman tonight, it will do the game a disservice.

Regardless of the outcome, this case is one about which the AFL should think hard. For, when you drill down, it speaks some home truths about modern football.

You don’t follow? Well, I don’t expect more than a minority will. For most of you have been led up the garden path of a modern game almost without rules. Let me explain.

Ten years ago, on a Friday night, I took an English cricket commentator for his first experience of the Australian code. A lover, and long-time watcher, of sport, his reaction – after a couple of quarters – was illuminating.

“I see,” he said, “the referees just run around doing nothing and then, every now and then, they say: ‘Enough’s enough,’ and blow the whistle”.

In other words, a person viewing with fresh eyes was seeing all manner of tackling and other physical contact, and when a free kick was eventually paid it appeared to be for nothing more than what had gone unchecked for the previous five to ten minutes.

The whistle is, of course, blown with slightly greater discernment than that, but I could understand his confusion.

Free kicks, particularly those for ‘contact’ offences, have been wound back over many years. Defence has been encouraged by coaches. The game’s off-field managers have bowed to this, and to the mindlessness of those in the crowd who see the umpires as a nuisance.

There has been a lack of will from the top to say: “The implementation of the rules is actually good for the game; the rules define the game and we want a code that has definition.” That the on-field game has become such an amorphous, congested mass is not unrelated to the above.

So, why is this relevant to the Naitanui case? 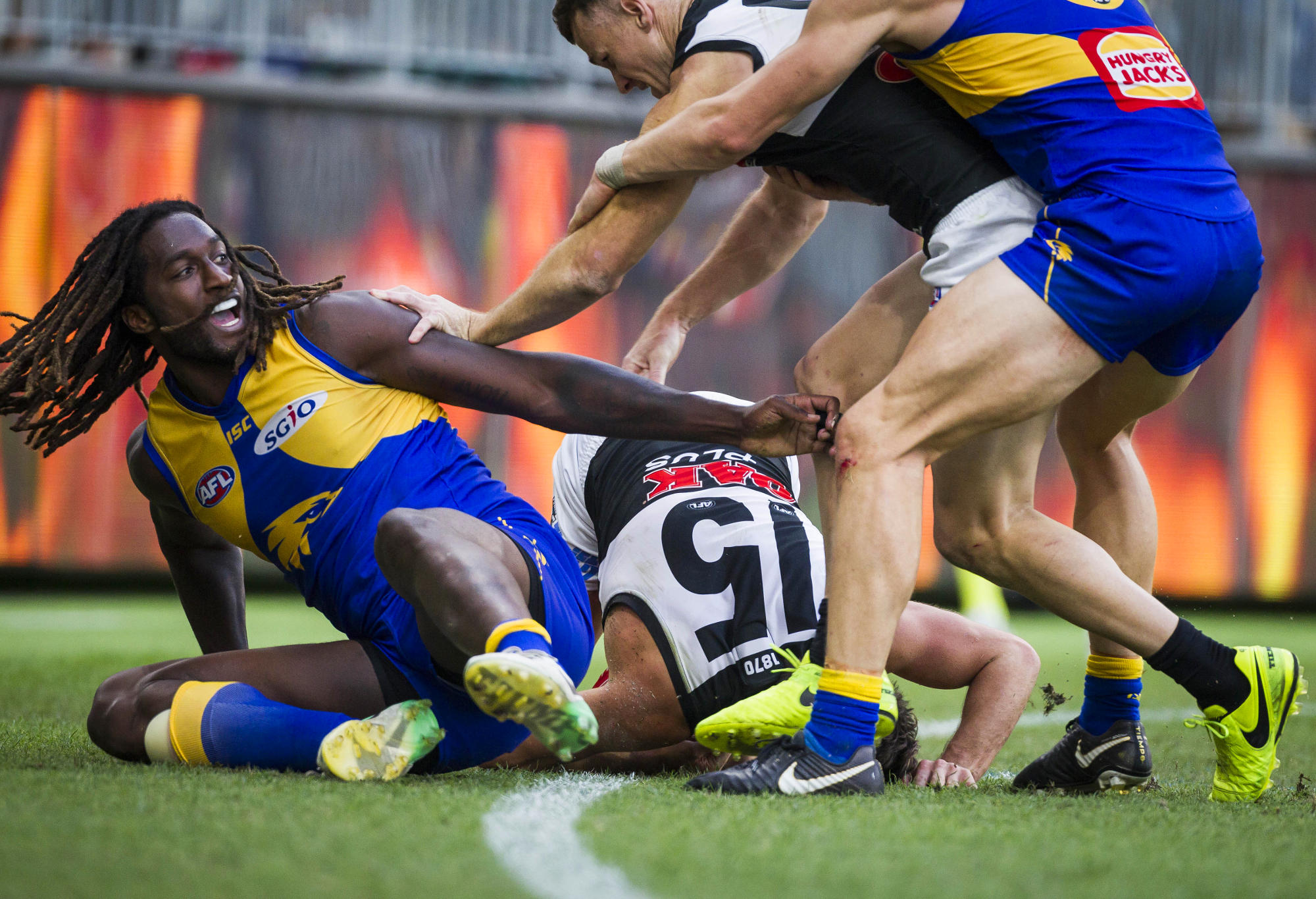 That coaches like Chris Scott and Alan Richardson have spoken in equivocal terms about Naitanui’s tackle tells of their mindset.

Then there’s the public, which seems to no longer care about the most basic of the game’s laws. And the ‘push in the back’ was once the most commonly awarded free kick.

Clearly, Naitanui pushed Karl Amon in the back. No one, surely, is arguing with that. But it’s the manner in which it was done that tells the story. And the story is that he approached Amon so fast and hard that he didn’t just push him, he rammed him with ferocity into the turf and caused a head injury.

You can go on all you like about the fact that Amon turned from a side-on position to rear-on as Naitanui approached, but he was in possession of the ball. He does have some rights as the ball-carrier, doesn’t he? Yet some analysis of the incident seems to portray Naitanui as the victim, as though Amon put him in an impossible position by turning his body.

If Naitanui is a victim, he’s a victim of the modern mindset. He is encouraged by his coach, every other team’s coach, his team’s supporters, every other team’s supporters, the umpires, and the game’s administrators to go flat-out in such moments. He approached flat out, without sufficient duty of care, and when things changed he couldn’t do other than lay an illegal, injurious tackle.

The underlying problem is that the umpires, in their modern, minimalist implementation of the laws, don’t do enough to discourage tackling breaches. So, Naitanui felt at liberty to approach the ball-carrier as he did.

Yet the umpires have a handbrake at their disposal. It’s called a whistle. Blow it more often when tackles slip high or, when applied from behind they carry the ball-carrier forward, and they will moderate the game’s speed. They will also make it better to watch.

What their lack of attention to these matters has had the effect of doing is to allow the methods of the ‘stopper’ to prevail over those of the creator. The game is, thus, less attractive to watch and it’s become harder to score.

The power brokers have been asleep at the wheel, have veered to the wrong side of the road, and there is now a big truck coming the other way. It’s not Nic Naitanui, it’s a growing problem with ugly games and low scoring, leading to spectator frustration and bad television viewing.

The big truck that rammed Karl Amon from behind last weekend should provide some food for thought.