OK, this is getting a little bit silly now for Adelaide.

The last time we saw the Crows on a Friday night, they managed to knock off the Swans at the SCG despite the absence of both Crouch brothers, Rory Sloane, Eddie Betts and David Mackay.

This time around, they’ll be without skipper Taylor Walker, Sloane, Mitch McGovern, both Crouches, Luke Brown, Riley Knight … you get the point.

As we saw with the Giants at Kardinia Park a couple of weeks ago, there always comes a tipping point for even the most talented teams.

What only a week ago looked like a chance for the Crows to boost their percentage, suddenly looms as a danger game.

Thankfully for Adelaide, they’re not travelling to take on the Swans this time around. In the comfortable surrounds of Adelaide Oval they’ll host the Bulldogs, who in their previous two interstate trips this season have gone down by 82 points to GWS and 54 points to Fremantle.

The Dogs are coming off three straight unconvincing wins against cellar dwellers – Carlton, Gold Coast and Brisbane – but the club that has fielded the youngest 22 in every round gets a nice boost of experience tonight.

Suddenly a defensive group that was packed with kids a fortnight ago looks more sturdy with Wood, Trengove, 150-gamer Matthew Suckling and Hayden Crozier alongside pups Zaine Cordy, Bailey Williams and Ed Richards. Jordan Roughead also comes into the side, adding another experienced body around the ball.

And it’s around the ball where the Bulldogs’ should have the advantage. The Dogs are No.1 in the competition for clearance differential at +43 on the year. The Crows are ranked 16th at minus-24 through eight games. Jack Macrae, Marcus Bontempelli, Toby McLean, Lachie Hunter, Luke Dahlhaus and Mitch Wallis can mix it with most sides,

Adelaide will want big games from Hugh Greenwood and Cam Ellis-Yolmen, who both stepped up as required in Round 5 against the Swans – Greenwood had six clearances and 11 tackles, Ellis-Yolmen five and eight. Those two, along with Bryce Gibbs and Richie Douglas will be crucial to the stoppage battle. 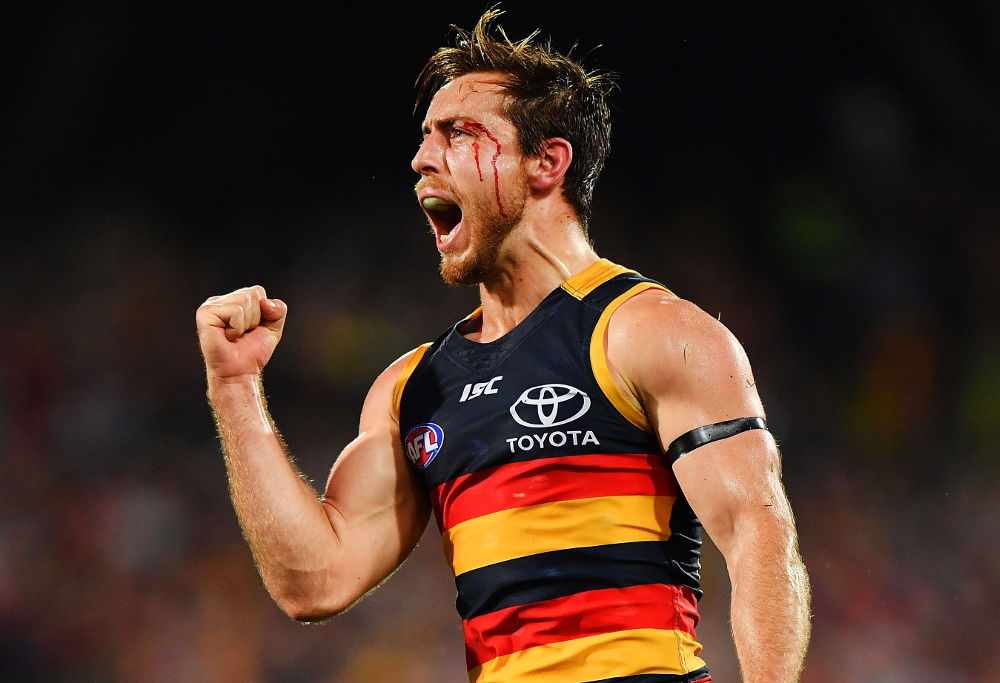 Former Kangaroo Sam Gibson could also be important in his first game for the Crows. He might even get the tough (impossible?) job on Bulldogs ball magnet Macrae.

Not that winning clearances is the be all and end all – the Tigers are ranked 15th at minus-22 – but if the Dogs are to cause an upset, it’ll be important for them to get their hands on the footy first, get it into their half and pile on the pressure.

The former Footscray have been pretty good at scoring from forward-half takeaways this season, getting almost five goals a game from intercept chains starting in their attacking half (ranked seventh).

The Crows, though, are a different beast in that regard, getting 38.9 points a game from forward-half takeaways (ranked second). Just what those numbers mean with so many important players out is tough to say.

Tom Lynch, Betts – in his 100th game for Adelaide – and Josh Jenkins still give the Crows enough firepower to kick a winning score. In the defensive third they have rock-solid Daniel Talia and the league’s leading ball-winner Rory Laird controlling things. Paul Seedsman is in All-Australian form on the wing.

Even short-handed, Adelaide have a good chunk of top-end, mature talent. But more than Don Pyke is used to they’ll be counting on inexperienced players. The Crows will have eight players with fewer than 50 games experience in their line-up tonight (the Dogs have nine).

Fifth-gamer Jordan Gallucci’s last-minute brain fade in last week’s Showdown probably cost the Crows the game. Young players do dumb things, especially when they’re tired or things aren’t going their way. The more young players you have, the more chances there are for bad things to happen. Adelaide are a whole lot more unpredictable than we’re used to.

If the Crows can a win tonight they’ll improve to 6-3, drop it and they’re 5-4 with a tricky month ahead given their injuries. This is an important match for the home side to win – no matter how ugly.

For the Dogs, a victory would give them the same record as Adelaide and perhaps even restore any September hopes that might have faded since the season started.

I’m not seeing it. Adelaide by five goals.