The greatest IPL XI of all time

With the comp nearing an end, we have named an all-time great IPL XI, sticking to the IPL rules – no more or less than four overseas players.

Many of the players selected may not be in form at present, but have scored the runs or taken the wickets to be worthy.

Chirs Gayle
The overseas opener spot was out of David Warner and Gayle, and because Gayle has scored more runs, he gets in.

He bats with a tree trunk, which most couldn’t even swing, and hardly moves his feet – so don’t ask how he has scored so many runs.

Virat Kohli
Virat is a versatile batsman, able to bat anywhere from opener to number five, who has 4932 runs at an average of 38.83 and a strike rate of 131.03.

He is one of the more subdued T20 batsmen, not noted for his power hitting, but he regularly finds the boundary.

Suresh Raina
The IPL’s all-time leading run scorer, as of last week, Raina can also bowl some handy overs and is an exceptional fielder.

Rohit Sharma
Unlucky not to get the ‘c’ next to his name, because there are so many natural leaders in this side, nonetheless Rohit is a special batsman who cannot be left out of this team.

He has an IPL average of 32.18 and a strike rate of 131.27, but the most dangerous thing about him is his ability to play some of the most brutal knocks you will ever see.

AB de Villiers
With so many players jostling for middle order spots, AB could easily swap with Rohit if needed. He has an IPL batting average of 39.09 and a strike rate of just over 150, is great at building an innings, and brilliant at the death – which makes him a truly all-round batsman.

Let’s not forget that he is a more-than-handy gloveman if injury occurs. He has three IPL centuries and 26 fifties to his name.

MS Dhoni (c)
You simply cannot have an all-time IPL XI without MS Dhoni. The man is a cricketing legend and his ability to finish an innings or to chase down a total is amazing. He has an IPL average of 40.55 and a strike rate of around 140, with 20 fifties.

He could make the team for his batting alone but it is his glovework that sets him apart – he is an absolute freak keeper who can take catches that most wouldn’t. 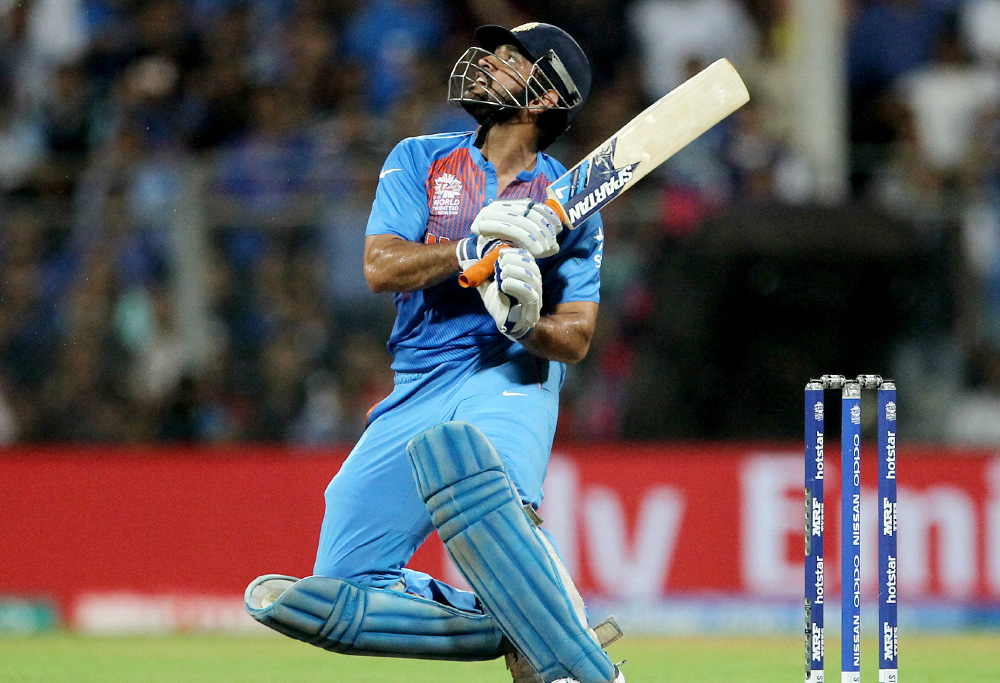 Dwayne Bravo
The fifth highest all-time wicket-taker for the comp, Bravo and Bhuvneshwar Kumar are the only pair to receive the purple cap in multiple seasons – Bravo is also a very good death bowler.

Bhuvneshwar Kumar
The other bowler to have multiple purple caps to his name, Kumar has made a name for himself for being able to open the innings and close it with his many variations, one of them being the ‘knuckle ball’, which he constantly executes perfectly.

We have three death bowlers in this side, which is handy in case someone has a bad day with the ball and gets smacked about. Kumar has a bowling average and economy of 21.92 and 6.91 respectively.

Amit Mishra
The second-highest all-time wicket taker in the IPL, Mishra just edges out Piyush Chawla because he has more wickets and a better economy.

Lasith Malinga
The all-time purple cap holder, Malinga will give you overs wherever you need them and has an uncanny ability to hit the crease and constrict the batsman with his lower than usual trajectory.

His slingy action also makes it hard for the batsmen to pick his slower balls, aiding his nice economy rate of 6.86 and average of 19.01.

Harbhajan Singh
Harbhajan has the most dot balls in the IPL ever, with over 1100 dots to his name! He also has the fourth most wickets, which shows how constricting and then deadly he can be.

Harbhajan fooled a batsman with variations, including the ‘doosra’, and that is what you want from your spinner. He has 131 wickets at an average of 26.89 and an economy rate of 7.02 runs per over.