If Alastair Clarkson was asking himself hard questions after Hawthorn’s narrow, Round 8 loss to Sydney, last Sunday would have inflicted a particularly dark night of the soul.

After the Hawks had the early running against previously winless Brisbane, the Lions kicked 19 goals to seven. The final margin of 56 points spoke of a belting but didn’t quite convey the extent of the disaster.

It was a day at the Gabba which brought to mind the best of spring in Melbourne. The sort of day on which the Hawks recently won grand finals.

Only, now, they looked too old, too slow, and no longer too good.

Yes. This is what happens to great teams in modern football’s environment of regulated recruitment and player-payment restriction. A club hangs on for a third flag, then a tilt at history by winning a fourth, and…

No, not the fourth flag! Rather, a list suddenly over the edge. As Clarkson’s Hawthorn courageously and creatively sought to rejuvenate their playing personnel, other premiership survivors continued to age.

So: Shaun Burgoyne is now closer to 40 than 30. Jarryd Roughead is 31, Paul Puopolo 30. Isaac Smith, Ben Stratton, and Ricky Henderson will be 30 before another season has ticked around. Cyril Rioli – who the Hawks desperately need back, fit and strong – turns 30 next year. Grant Birchall, already a tricenarian, can’t get on the park. 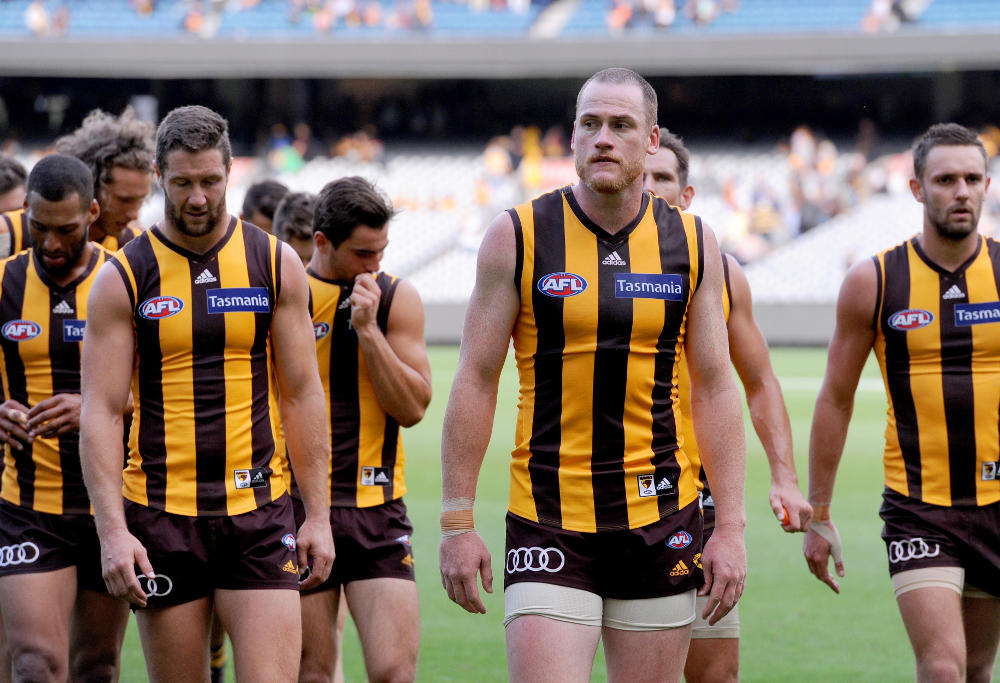 You can see why Clarkson and his list-management team felt compelled to take the hard decisions. Sam Mitchell is a few days older than Burgoyne. Hodge – while a good player on Sunday – is three weeks short of his 34th. And Lewis is showing signs of decline with Melbourne.

Meanwhile, Hawthorn lost its best runner, Brad Hill, to Fremantle and perhaps made a blue in letting Billy Hartung go. The Hawks are now capable of being embarrassed by clubs employing quick ball movement and youthful leg-speed.

Just beyond the halfway mark of last season, they were 17th on the ladder with four wins from 12 outings. One veteran of the media gallery with Hawthorn leanings murmured darkly to me of a wooden spoon.

Yet, somehow, Clarkson revived them. Four rounds out from the finals they were a chance to again be there. Only a Round 20 loss to Richmond – about whom we were soon to learn more – derailed the ambition.

A miraculous reboot, guided by the master-coach, seemed to be happening before our eyes. A 5-2 start to the new season was confirmation. It looked like 6-2 before the Swans conjured the last three goals that Friday night at the MCG. And perhaps Clarkson sensed what had just slipped through his group’s collective fingers.

If supporters have an instinct as to how the team might go on a given day, imagine what goes on in a coach’s psyche. When the modern-day maestro suddenly began airing his uncertainties in an extended radio interview on 3AW, perhaps it was his unconscious talking. To those of us listening, it seemed extraordinary. His team had been but ten minutes from outright third on the table. To get there, they’d convincingly beaten Melbourne and Collingwood, edged Geelong, and were so close to beating the Swans.

Now, just over a week later, they’re out of the eight, with a season-defining run of matches against West Coast, Port Adelaide, and Adelaide ahead.

We’re about to learn a lot about the post-juggernaut Hawks. And perhaps about whether, indeed, Clarkson continues to be the man to lead them into the longer-term. If it’s true what they say of sports people – that when they start thinking about retirement, they are retired – this is a period to watch the Hawks more closely than ever.

The questions bank up. Just why did Clarkson speak as he did after the Sydney game? Has something in his connection to Hawthorn died, as has happened at some time between every coach and his club since Jock McHale? Does he need a new challenge? Is it that Clarkson might be wooed elsewhere? Could it, as has been suggested, be to the AFL’s love-child club, Greater Western Sydney?

Of most immediate curiosity is the matter of how such musings might affect the connection between a coach and his playing group. Does it put the players in a similar state of uncertainty as that of us, the speculators? If so… what happens next?

All this is to play out. It’s a compelling moment. The greatest modern coach is wondering. And in doing so, he has the rest of us wondering with him.