West Coast are primed for a premiership

Having been tipped by the vast majority to miss the eight, West Coast are homing in on a grand final berth.

Their defeat of Richmond on Sunday has the club a game clear on top of the ladder with their current eight-game winning streak the best since 2005.

Before the season began, when Champion Data (the AFL’s official stats supplier) crunched all its projected numbers, it had the Eagles finishing 12th.

It has been a remarkable, pundit-defying turnaround.

With eight wins already in the bank, a top-two finish is within reach, and with it the possibility of a qualifying and preliminary final at Optus Stadium.

Across the past five seasons, the average number of wins for the second-placed team at the end of the home-and-away season has been 16.8.

The Eagles’ remaining six home games – against St Kilda, Essendon, Greater Western Sydney, Western Bulldogs, Fremantle and Melbourne – all look highly winnable, as does the Round 23 encounter against Brisbane at the Gabba.

That would give the club 15 wins, with further away games against Hawthorn, Sydney, Adelaide, Collingwood, North Melbourne and Port Adelaide.

Strangely, West Coast’s only loss has come at home, Sydney winning the opening round encounter by 29 points.

The Eagles have posted away wins at Etihad Stadium, the MCG and the Sydney Showgrounds, albeit against a trio of teams that were struggling or injury riddled.

The club’s gameplan has undergone a dramatic change this season.

Last season, the club averaged 214 kicks and 163 handballs per game. This season, the numbers stand at 231 and 129 respectively. It has become a game of meterage this season with a more direct style and increased urgency in getting the ball inside 50.

And it is within that arc that the club has had its most stark improvement. 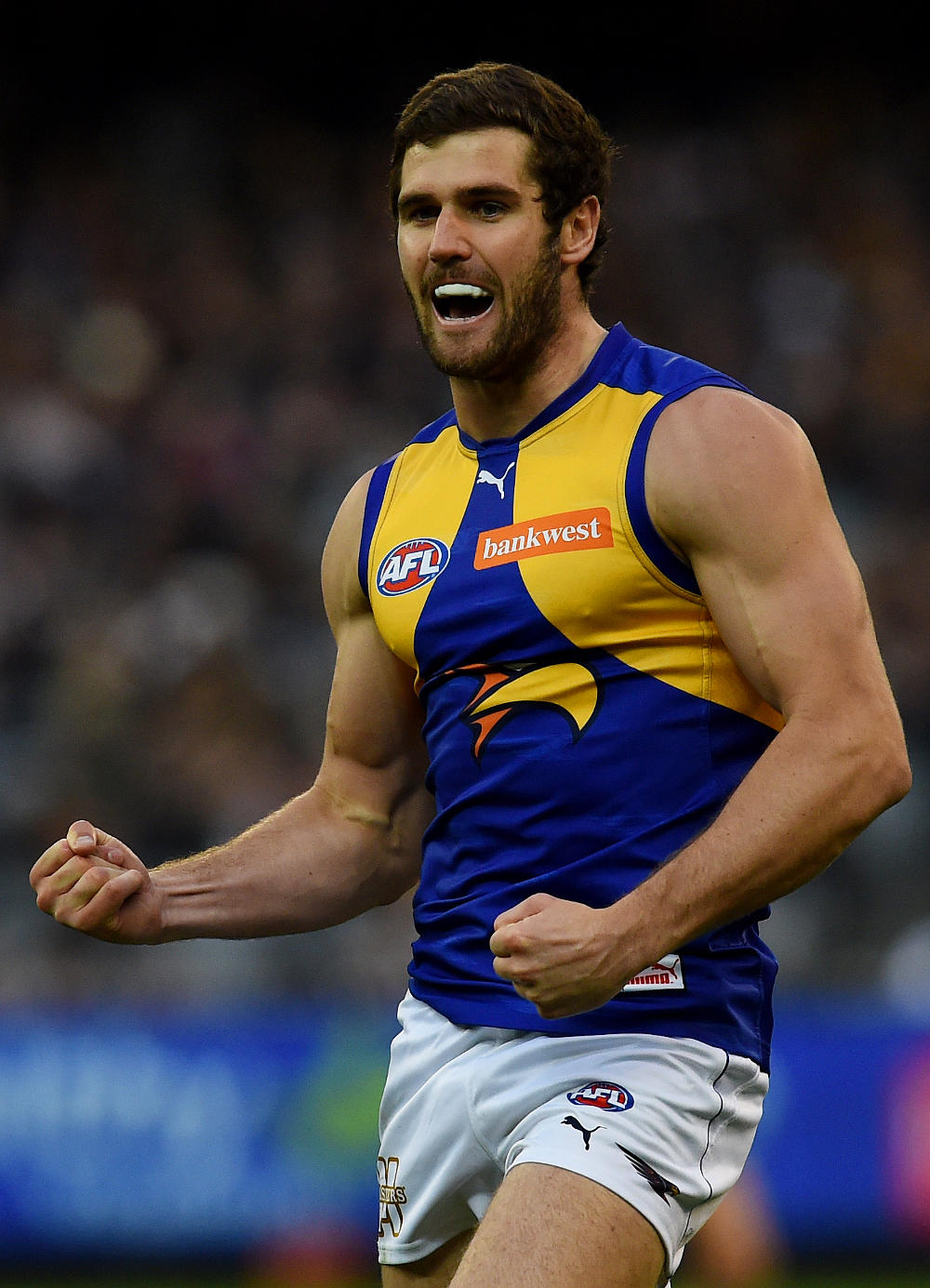 Jack Darling has been a revelation and would be one of the first chosen if an All Australian side was selected after nine rounds.

Slightly too young to qualify for the 2009 draft, he was touted early as a prospective number one pick the following year, however some off-field incidents saw his currency drop.

The Eagles ended up taking him at number 26. The talent was always there but consistency, despite over 150 games, was lacking prior to this season.

Currently, he sits second behind Nat Fyfe in the AFL Coaches Award voting and in a similar position in the race for the Coleman Medal, three goals shy of North’s Ben Brown’s 31 goals.

Darling’s hard lead-up footy and pack marking has been a feature of his game. He leads the league in contested marks (30), is third in the competition for total marks (74), and ranked second in score involvements (77).

With dual Coleman medallist Josh Kennedy sidelined until Round 4, Darling was the primary go-to big man inside 50 at the start of the year, a fact that the coaching staff would have been focusing on through the pre-season.

He relished the opportunity, kicking 9.1 through the first three weeks against a career average of 1.9 goals.

On Sunday, against the Tigers, he kicked a career-high six goals.

Immediately upon his return, Kennedy kicked five goals against Gold Coast and has kicked 18 in his six games to date, although in recent weeks he does not appear to be as smooth in his movements.

Mark LeCras, who looked well past his best for the bulk of last season, has rebounded in style, booting 18 goals through nine games. If the 2010 All Australian continues to average two goals a match it will be an invaluable contribution alongside the two power forwards.

Livewire rookie Liam Ryan had an immediate impact, slotting seven goals in his first three games before going down with injury.

The slicker ball movement and greater reliance on kicking has seen West Coast increase their inside-50 entries – last season the club was ranked 13th while this season they sit fourth.

Down back, Jeremy McGovern continues to rule the air, with his 23 contested marks bettered only by teammate Darling across the league.

Skipper Shannon Hurn is heading toward a potential maiden All Australian guernsey. He is repeatedly used as a link coming out of defence – he has the second highest number of marks in the league – with his accurate long-distance kicking providing a springboard into the forward half.

The defensive unit also looks to transition through Lewis Jetta, whose pace and effectiveness by boot can also hurt the opposition.

Interestingly, despite the return of Nic Naitanui, the Eagles are barely in front of their clearance count from last season – 38 vs 37 – but the disposal efficiency is superior.

The team’s leading clearance players are reigning club champion Elliott Yeo, Luke Shuey (currently sidelined with injury) and Jack Redden, who in his third season with the club, and tenth in the AFL system, is having by far his best season.

Andrew Gaff has become more of an inside player and leads the side in disposals.
The midfield is being overseen by four-time Hawthorn premiership player, Sam Mitchell. After one season on the ground with the club, he has transitioned into the coaches’ box and his impact on the players at the coalface cannot be underestimated.

Around the ground, the likes of Dom Sheed, Liam Duggan, Tom Barrass and Tom Cole have all continued on an upward trend.

Heading into Round 10, the Eagles are chock-full of confidence and self-belief and they have every right to be. They have laid a launching pad that can quite conceivably take them to the last weekend of September.