rebel
Roar Guru
25th May, 2018
6
Join the conversation
Advertisement
Write for The Roar

For a bit of fun and to create some discussion, I have put together a list of 23 recent players who were blessed with the opportunity of donning the candy stripes of the greatest district rugby club in the combined Sutherland and St George area, the Southern Districts Rebels.

This is not intended as a statement about developing players or where clubs should sit in the pecking order of Australian rugby. It is purely about players turning out for our club for whatever reason, be it Rory Arnold as a 3rd grader in 2011 or a local junior who ends up wearing the green and gold of Australia.

One that falls into the latter category is Rob Horne and although I tried to keep the team to active players, I gave him dispensation by only recently retiring due to injury this year. However, this rule has led to me leaving out other recently retired players likely to have been picked, such as Dan Palmer, Radike Samo, Scottish and Lions international Chris Cusiter and Ita Vaea.

One player that I was surprised to see still active was Huia Edmonds who, being capped for the Wallabies, has pushed my first choice to the bench, but hopefully that will change soon. The hooker domino effect also led to former Waratah John Ulugia not making the top 23.

Another unlucky omission, Tim Metcher, whilst good enough to represent the Melbourne Rebels, play the B&I Lions twice for the Force and NSW/Qld Country and currently the Seattle Seawolves, faced stiff competition.

Other Favourite Sons joining Tim in PRO Rugby are Tongan international Kurt Morath at the San Diego Breakers and USA international Matt Trouville at the Houston SaberCats. The Philippines and the United Arab Emirates have had Rebels representatives and the club currently has a healthy South American contingent.

A special mention must also go to Olivia White as a member of the Australian women’s 7s side.

No doubt a few Favourite Sons will be able to amend the side I have chosen or add to the notable mentions I have forgotten. I also look forward to seeing what others come up with from their clubs or stories they can share like the time Jerry Collins played a lower division club match in England, it doesn’t have to be limited to active players.

The Waratahs are in a rebuilding stage, there’s no question about that. In their Round 4 clash against the Rebels, Joe Cotton became the 17th player to debut this season alone.

Is he a Wallaby, or a Socceroo? 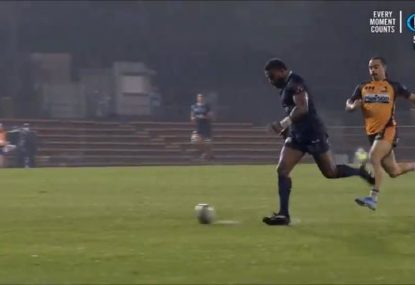 Wallabies coach Dave Rennie is all in for a proposed trans-Tasman Super Rugby competition.