Ireland's tour of Australia 2018: Young bloods on the track

That’s the number of players that Schmidt has selected – for trial and on experience – since the start of the 2016 Six Nations right up to this week’s announcement of the 32-man Ireland Tour Squad for Australia.

If ever the phrase, ‘never die wondering’, matched a man’s purpose, Schmidt is your guy. His Oz squad has two more uncapped players for use during the month of June in Brisbane (9th), Adelaide (16th) and Sydney (23rd).

It’s been a twisting, turning road at times as his unending search for talent has looked at every player available to him within the Irish system and playing in Ireland, capping over 30 players in the last two seasons.

In comparison, Michael Cheika has blooded 20 new players in the test arena since Australia finished runners-up at the 2015 World Cup.

So let’s put the spotlight on his young bloods – the players whose names may not be so familiar to Aussie fans, but who could likely be running out on Aussie tracks next month to prepare them better for Japan next year.

All of them are 26 or younger. A quick scan through the 30-odd names and you can pick out quite a few of the old reliables.

Rob Kearney (83 caps) at full-back is having a new lease of life this season and is now the Irish player with most honours, including four Six Nations titles (two Grand Slams), three PRO 12 titles, and four European Cup medals.

Sitting on the bench to replace him at some point might be Schmidt’s most recent cap selection, hot-stepper, 20-year old, Jordan Larmour – young, raw and exciting to watch, he’ll get a lot of learning on his first tour – even if he doesn’t play much of a part.

Alternatively, Munster’s Andrew Conway (six caps) is a calm presence at the back, yet spiky and aggressive in defence, with an unexpected shift of speed on the wing that keeps him scoring tries, particularly this one for Munster to defeat Toulon in the European Cup.

Winger, 67 cap Keith Earls, was named Ireland Player’s Player of the Season with his pace as good as ever, and his save-the-day tackling during the Six Nations.

He’ll likely be playing with try-wunderkind, Jacob Stockdale, a 22-year-old who broke into the Irish team last November and hasn’t stopped scoring since. 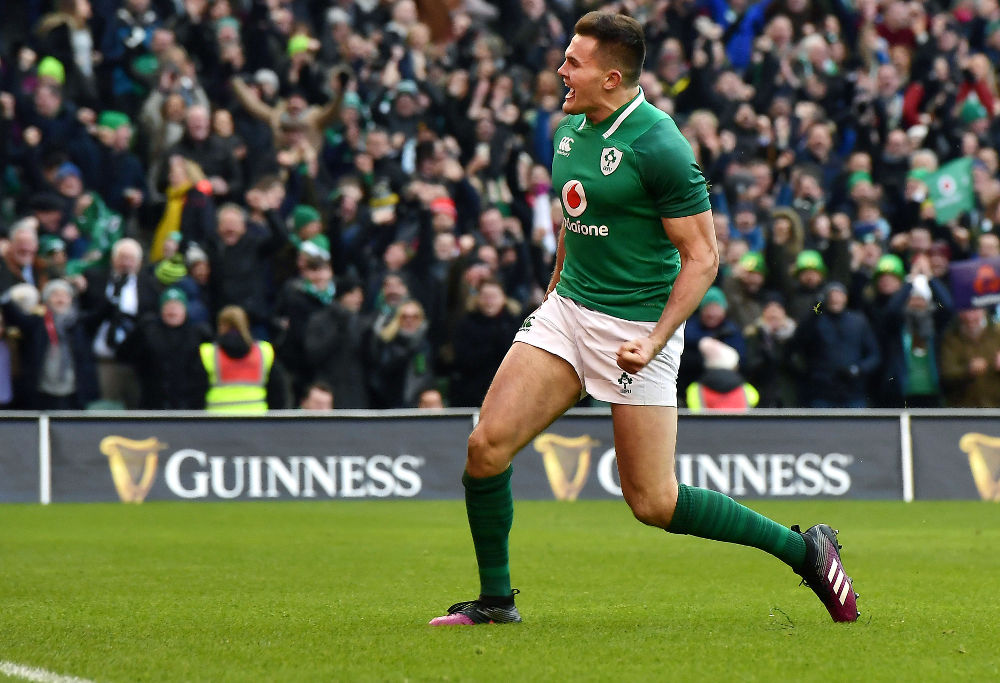 He had 11 tries in his nine caps setting a new Six Nations try-record along the way in the Grand Slam finale against England in Twickenham. He’s big, fast, nimble, has an eye for an intercept, and pretty handy at 15 if it’s required.

Hopefully, he is paired with his younger Leinster team-mate in the 13-shirt, 23-year-old Garry Ringrose, who scored his maiden senior test try against Australia in Nov 2016.

Ringrose, with his low centre of gravity, ability to duck and dive, and the essential pace for an outside break has more than a hint of the former 13-shirt holder, Brian O’Driscoll, about him. His defensive nous for a young player is remarkable but no doubt he’ll be tested further against the Wallaby midfield.

Recently capped Bundee Aki is the only other specialist midfielder – at 12 – in the squad, but Earls, Stockdale and Larmour are able to adapt if required.

Inside them will be the wizened old heads of Johnny Sexton and Conor Murray. Sexton is having one of the best seasons of his career.

From dropping ‘that goal’ after 41 phases against France in the Six Nations to steering his Leinster team to winning the European Champions Cup for the fourth time, and getting them to the final of the PRO14 Championship this coming weekend against current PRO12 champion Scarlets.

Joey Carbery, the 22-year-old back-up on tour will be hoping to get a chance to shine in the ten shirt for his country hampered by the fact that his club has been playing him largely at 15 all season.

He hasn’t been at ten because uncapped Ross Byrne has emerged quietly to run the Leinster ship during the PRO14 Championship, as well as filling in very effectively for an injured Sexton in the European Cup on a couple of occasions.

For a 10, he seems quiet, reserved and unflappable with a good boot but has moved into pole position to take over from Sexton at Leinster without too much media fervour. Hopefully, he gets his first cap and the tour goes well for him.

Conor Murray has blown hot and cold during the season, dealing with an injury to his leg, but it hasn’t stopped him stepping up at key moments to take long-range successful kicks for club and country. 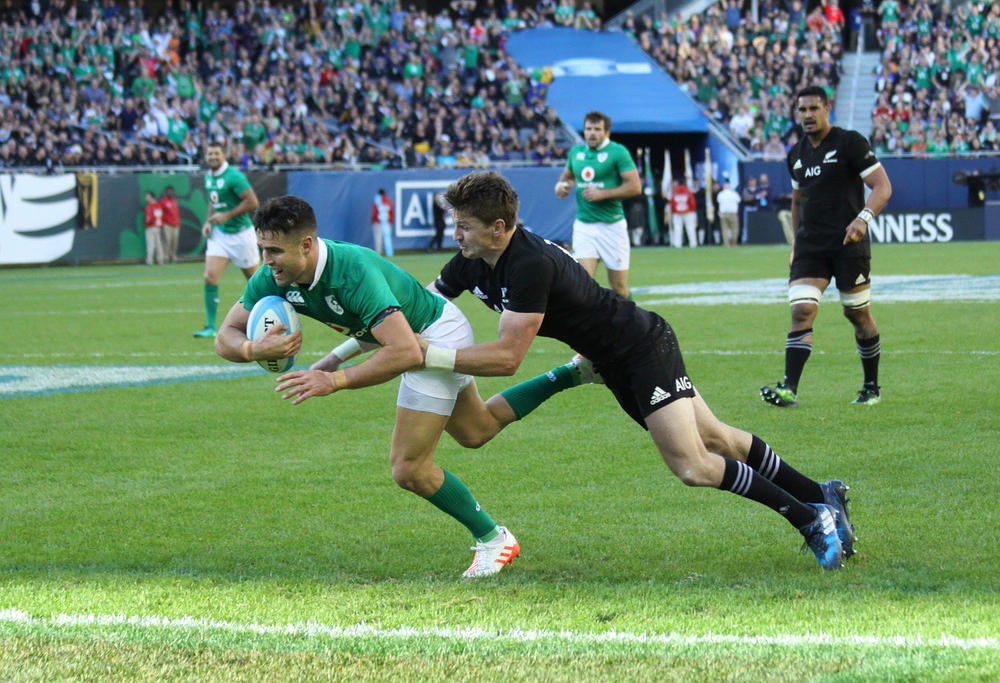 If Schmidt chooses not to start him in one of the tests, then a surprising alternative may be Ulster’s player of the season with players and fans, John Cooney.

He’s a scrum-half almost in the French ‘petit-general’ mode who can kick dead-eyed from anywhere on the pitch.

He had the unenviable task of replacing the iconic Ruan Pienaar, a huge fan favourite, who was moved on by the IRFU last season much to their disgust.

Cooney finished as top points scorer in the PRO14 this season and will hope to add to his maiden cap gained last summer.

Up front, the tough-nut experienced front row of Healy (78), Best (111) and Furlong (23) will anchor the set-piece with Jack McGrath (47) and Sean Cronin (61) the experienced heads ready to roll off the bench at the 60-minute mark.

Tadgh Furlong is 25-years-old now with three Lions test caps to his credit and has made one hell of an impact and is regarded as one of the best in his position in the game currently.

I don’t profess to know much about the art of propping, but some say that his younger backup, 22-year old, Andrew Porter is going to be even better.

He started out as a loosehead, but with some prompting from Schmidt and his club forwards coach John Fogarty he was encouraged to shift over this season.

He landed with a bang in a Leinster Interpro match against Ulster in January. Schmidt has been picking him since and has 7 caps so far.

Devin Toner (58) as the veritable lighthouse of the Ireland team needs no introduction – he runs the lineout easily and continues to be the reliable catch for the classic Irish set-piece moves.

Alongside him will be a young tyro who’s been billed as the next Paul O’Connell for the Irish team, James Ryan.

At 6’8” and 17 stone, he has a little bit of filling out to do. However, his track record so far is second to none.

He was running the lineout at 16 in his school’s cup team, then captained Ireland U20s in 2015/16 in their best season, beating New Zealand for the first time before losing in the Rugby World Cup final to England.

Schmidt was persuaded to select him for his first cap on the USA/Japan tour last June before he’d even played a senior game for his province, Leinster.

In his second touch of the USA match, Ryan scored a try as part of a comfortable 55 to 10 win. He was promoted straight from his first-year academy to the senior Leinster squad for this season and has played 21 matches for both club and country.

Only 21, he hasn’t lost a game yet in his senior career and has a Grand Slam and European Cup winners medal on his shelf. He’ll be hoping to make it a treble with the PRO14 final this weekend against Scarlets.

One of the Scarlets’ opposition locks gunning for him will be another Irishman, uncapped 25-year old Tadgh Beirne. He left Leinster two years ago after a long injury layoff and has reinvented himself in the lock and back row department with the Welsh club.

A former Ireland U20s and Ireland sevens player, he’s quick, nimble and ferocious at the breakdown, and knows how to score tries, with seven this season, including a memorable one where he stepped England and Bath full-back, Anthony Watson, and left him for dead as he powered over.

Beirne set records last season and this in the PRO14 Championship for turnover steals, (37 this season) with his coach, New Zealander, Wayne Pivac saying, “For a second row, I have never known anybody so strong over the ball and so agile and so quick in thinking.

“He is incredibly strong in the upper body through the arms, body and chest so once he locks in over the ball he is very hard to move. Everyone gets replaced, but that one part of his game is irreplaceable.”

Finally, in the back row, some of the usual suspects have travelled in the shapes of O’Mahony and Stander.

However, the Irish provinces have had to bite deep into back row stocks this season as Sean O’Brien has been on a long injury layoff, Rhys Ruddock, Tommy O’Donnell, Jordi Murphy, and then 25-year-old, 10-cap Josh van der Flier were crocked.

At 23, and nine caps, Leavy has promised to be the next and possibly better than, Sean O’Brien. His displays for Ireland earned him plenty of plaudits and his role in Leinster’s season made him their Player’s Player of the Season last week.

His interlinking with James Ryan during the European semi-final against Saracens a few weeks ago was rewarded with a well-taken try to seal the match for the men in blue.

Alongside him could be Leinster’s new number eight following Heaslip’s enforced retirement – Jack Conan, a 25-year old, seven-cap up-and-comer who now has his pathway clear to competing with Stander for the national test jersey.

Conan has more height, pace and agility in contrast to the bullocking, bulldozing force of CJ – it gives Schmidt and company a good headache selection.

If you didn’t get a chance to see any of the Six Nations this season, here’s a highlights clip of their championship win.

As Cheika said this week, “They are obviously very well coached, they’ve got a clear and coherent plan they want to deliver and they deliver that plan every week.

That’s what’s got them to number two in the world and it’s a place that we’ll be looking to cut them down from when they come over here.”