Sunrisers Hyderabad have stormed into the 2018 IPL final, where they will take on mighty Chennai Super Kings.

Neither team has made it this far with just one or two flashes of brilliance from one or two players; their entire teams have contributed in some way or other. For Chennai Ambati Rayudu and Shane Watson have scored a ton each, while MS Dhoni and Suresh Raina have got over 400 runs for the season.

But in the first knockout it was Faf du Plessis who pulled them out of woods, while Dwayne Bravo won them games from impossible situations.

The Sunrisers’ batting has been dependent on Kane Williamson, with other batting around him. It’s been there bowling which has won games more often than not, defending 119, 132, 146 and 157 against different oppositions. Bhuvneshwar Kumar and Siddharth Kaul have bowled well at the top and the death.

But Rashid Khan has been the game changer for Hyderabad. This week he was named associate cricketer of the year in the International Cricket Council awards. He is playing in Twenty20 leagues around the world – India, the Caribbean, Bangladesh, Pakistan and Australia – and getting paid massive dollars for it. He has made fanbase of his own in each of these countries.

Not even the greatest of batsmen have been able to read him. MS Dhoni, Virat Kohli, AB de Villiers – all have been foxed to his googlies. No-one can read which way he is spinning the ball. He bowls between 92 and 97 kilometres per hour, making it almost impossible for any batsman to get down the pitch to smash him. He is just so accurate. 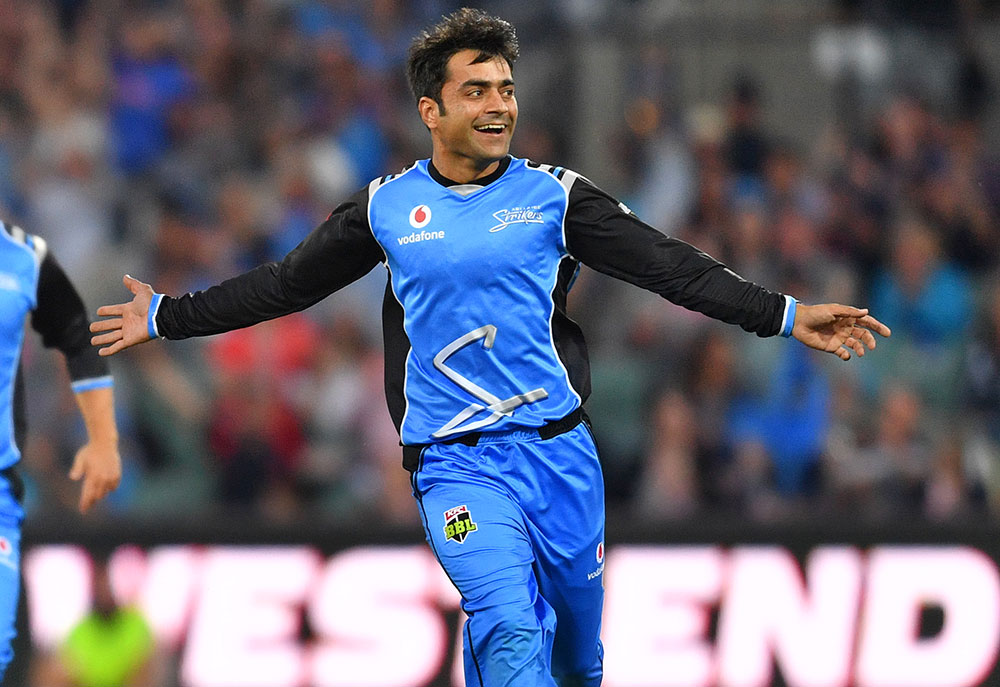 Rashid learnt his craft from his brothers and practised by bowling on roads, streets and in people’s backyards. There were no academies facilities in that part of the world when he started. Without a doubt one can say growing up in those terrible circumstances made him mentally tough for the long journey ahead.

Rashid recently became the fastest bowler to take 100 wickets, overtaking Mitch Starc. He got the opportunity to lead Afghanistan in a World Cup qualifier, and despite a slow start, they went on to win the tournament, beating the West Indies in the final.

Even in this IPL series he already has 21 wickets, just behind Punjab’s Andrew Tye. Though he was smashed by Chris Gayle in one of the matches and didn’t do well in a few following matches, Rashid was able to send impressive deliveries in the later stages.

For example, yesterday Rashid Khan took three wickets for 19 runs in his four overs as he got rid of Chris Lynn, the dangerous Andre Russell and Robin Uthappa along with two catches and run out of Nitish Rana.

Always felt @rashidkhan_19 was a good spinner but now I wouldn’t hesitate in saying he is the best spinner in the world in this format. Mind you, he’s got some batting skills as well. Great guy.

Sachin Tendulkar was so mesmerised by the leg spinner that he tweeted, “Always felt Rashid Khan was a good spinner but now I wouldn’t hesitate in saying he is the best spinner in the world in this format”.

Those words coming from the legendary Sachin Tendulkar should give him a lot of encouragement. With a Test against India sans Virat Kohli, Afghanistan could sense some opportunities, plus the tracks in India provide spin as well.

No doubt the rise of Afghan cricket is great news for the game, but they could be found wanting in the long term if they don’t face stiff challenges against top Test-playing nations.

For time being Hyderabad hold the ace known as Rashid Khan and an ace captain in Kane Williamson, who can hold his overs. But given his confidence, Rashid could pull of any trick out of bag.