After weeks (or is that months?) of speculation, new New South Wales Blues coach Brad Fittler has named his squad for Origin 1.

As as always, there are the usual mix of usual suspects, surprise inclusions and shock omissions in the Origin team, although with 11 debutants there are plenty of brave decisions by the NSW selectors.

To help you make sense of the squad, here are my thoughts on each of the players named by Fittler.

1. James Tedesco
After the Roosters’ questionable form to start the year, James Tedesco’s automatic selection for State of Origin was questioned. But even though Teddy hasn’t been firing, very few Roosters players have. On his day, Tedesco is still one of the most brilliant and exciting attacking players in the competition and when unleashed alongside the rest of the talent in the Blues squad, he’ll certainly be more than capable of igniting the New South Wales attack. Perhaps Origin selection is the boost he needs to get his season back on track. He has the best fullback numbers in the comp, averaging around 170 metres per game.

2. Tom Trbojevic
Despite Manly’s challenging start to the season, Tommy Turbo has been a shining light. His form has been up and down, but he has managed seven try assists in as many games. He’s also exceptionally versatile and could play the fullback position or on the wing. Also, is there a more awesome brotherly combination in the NRL right now than Tom and Jake? I can’t wait to watch the two of them combine for the Blues. My only worry is his ability to defuse kicks on the full.

3. Latrell Mitchell
The battle between James Roberts and Latrell Mitchell was one to behold a couple of weekends ago. Very few players can put a fend on like Latrell and all at 20 years old. He has made over 45 tackle busts, which puts him right towards the top of the leaderboard for that stat, and is guaranteed to be a nightmare for the Queensland defenders.

4. James Roberts
If we selected James Roberts simply for his speed, I would be completely comfortable with that. They don’t call him ‘Jimmy the Jet’ for nothing. His spark in attack is welcome in this Blues squad too and he will be a serious handful for the Maroons defence.

5. Josh Addo-Carr
The Fox! Addo-Carr has been one of the most impressive players in the NRL this year. He’s been leading all NRL try scorers for most of the year but he doesn’t just know how to find the try line; he is incredibly fast with about a dozen line breaks already this season. I’m looking forward to watching him combine with James Tedesco and the rest of the Blues backline to add some much-needed spark on the wing. 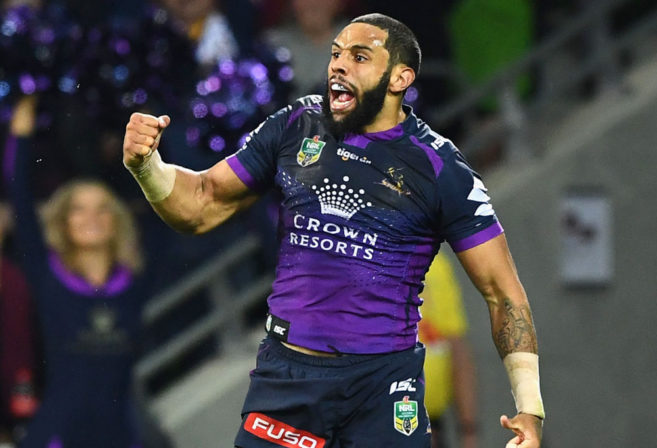 6. James Maloney
There has been plenty of talk about James Maloney missing out on Origin. But there was absolutely no reason for the veteran to lose his spot. He led the Panthers superbly in the halves without Nathan Cleary earlier this year and has done everything possible to retain his place in the halves. He brings much-needed experience to the Blues squad and given so many of his Panthers teammates feature alongside him, he will feel right at home. He might lead the NRL in terms of missed tackles but stats can be misleading. His friends in the forward line will help to plug any gaps.

7. Nathan Cleary
A young man who I very much hope is part of the long-term future of the Blues. We know plenty about Nathan Cleary already, particularly at how skilled he is on the footy field, but I have been particularly impressed with how quickly he has returned from injury and slotted back into the Panthers line-up. It’s time for the Blues to try something new and I’m confident the young halfback will be more than capable of stepping up on the Origin stage. What’s scary is how young he is and how much opportunity there is for him to continue to grow, develop and learn from those around him.

8. David Klemmer
One of the first names I put down on my Origin list. Klemmer was a standout for the Blues last year and was impressive during the Kangaroos’ World Cup campaign too. He is an absolute competitor and his aggression and big hit ups are what fans love about him. He’s been one of the only things for Bulldogs fans to cheers about this year and, just like Reagan Campbell-Gillard, is averaging just under ten metres per carry.

9. Damien Cook
Damien Cook, where have you been all my life? Wow. What a season he is having for the Rabbitohs. I cannot wait to see his exceptional running game on show for the Blues – just like when the Bunnies played the Panthers and Titans earlier this year. The best thing about Damien Cook though (other than his running game and crisp, effective service out of dummy half) is his defence. He made over 60 tackles a couple of weeks the Titans last week. He is well and truly ready for Origin. 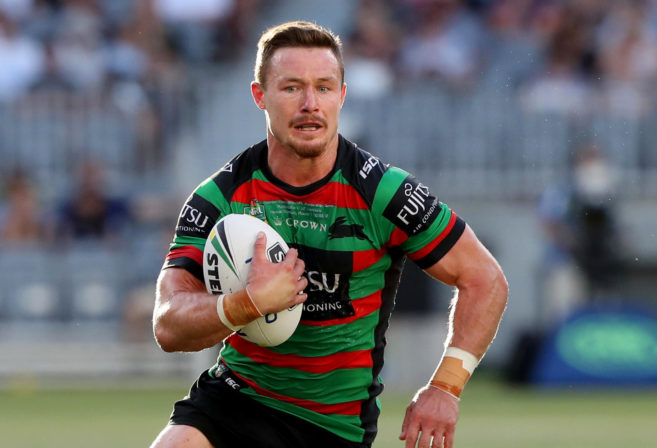 10. Reagan Campbell-Gillard
He has already been a Kangaroo, now Reagan Campbell-Gillard is a Blue. What I love most about RCG is his energy and how physical he is in every single game he plays. His aggression is something that the Blues could use, as are the 100 average running metres he makes per game. His metres per run – just under ten – are also exceptionally high, and the best among the props who were fighting for selection. We also need more moustaches in the Blues squad. Campbell-Gillard delivers there.

11. Boyd Cordner (captain)
The dialogue over the last couple of weeks suggesting that Boyd Cordner’s spot was at risk was ridiculous. It was never in doubt. He may not be playing in career best form at the moment, but he is the New South Wales captain and only an injury could have prevented him from getting selected. Look out for him as a decoy runner – it’s one of his best skills as well as just being a busy second rower. 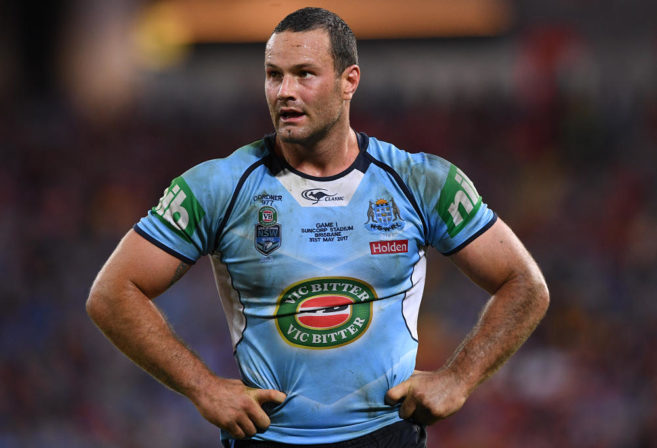 12. Tyson Frizell
I would have been very surprised to see Tyson Frizell miss out on an Origin spot, not just because of the Dragons’ form, but also because of his own. He played Origin last year and continues to go from strength to strength. He is also exceptional in defence.

13. Jack de Belin
It is finally Jack de Belin’s turn to shine at State of Origin level. He’s been on the extended bench for the last three years and for all three games last year, but now it’s time for him to make his debut. He’s one of my favourite footy players – he knows how to break a tackle and has a handy offload. He will be a welcome addition to the Blues line-up as part of the forward rotation.

14. Paul Vaughan
Paul Vaughan was exceptionally unlucky to miss out on selection last year after moving to the Dragons and having a break out season. In fact, I still don’t understand his snubbing. As a player he continues to go from strength to strength. He will add some much needed power and speed to the Blues forward pack and will be among friends with plenty of other Dragons featuring in the squad. He is also very effective in defence and is an absolute workhorse. Both traits needed in this Blues squad if they are going to beat Queensland. He may have a slightly lower workload this year than last, but that’s only due to James Graham joining the Red V.

15. Jake Trbojevic
Jake Trbojevic was always a certainty for State of Origin, even with the Sea Eagles’ challenging start to the season. A tackling machine, a forward with ball skills, he is able to play prop or lock and was a shining star for the Blues in Games 2 and 3 last year despite the results. He’s young and is part of the future of this squad. I’m looking forward to seeing his combination with brother, Tom. Did I mention he can also play 80 minutes?

16. Angus Crichton
Angus Crichton’s Origin selection is a surprising one. Not that he got here, just that he got here so early. Crichton had a breakout season in 2017 and while his overall numbers might be slightly lower this year, that could also be the result of other players (like the Burgess twins) stepping back up. He’s an exciting young player who is certainly part of the Blues’ future plans – it is good to see him getting his opportunity early.

17. Tyrone Peachey
Peachey has been in wonderful form over the last couple of weeks. Since Round 6, he has averaged 130 metres and four tackle busts and has been part of a Panthers squad that is turning plenty of heads. He is also capable of playing plenty of positions including in the back row, halves and centres, so is the perfect choice for the Blues utility role.

Tariq Sims (18th man)
It really is a shame that injury has cruelled Tariq Sims through his career and that he hasn’t had the best run in the lead-up to Origin. He’s having a great season for the Dragons though and is making the second most post-contact metres in the competition. He is also making some scarily good tackles and will certainly intimidate the Queensland pack both in attack and defence.

Nick Cotric (19th man)
It was never a matter of if Cotric was going to play Origin, but when, although he’ll still probably have to bide his time after being named as 19th man thanks to James Roberts’ lingering achilles injury. Cotric has made more tackle busts than any winger this year and certainly knows how to find the try line. With an average of seven line breaks, four tries, and over 100 metres per game, he is a welcome addition to any squad.