In defence of Ned, the scapegoat for our frustrations

Andrew
Roar Guru
31st May, 2018
28
Join the conversation
Advertisement
Write for The Roar

Utter the name Ned Hanigan in the company of Australian rugby fans and instantly the mood shifts, with music screeching to a halt, birds fleeing their nests and otherwise well-adjusted people whipping themselves in to an irascible rage.

Just what is it about this 23-year-old, seemingly good bloke from Coonamble that creates such irrational discourse around his every selection, action and movement on the pitch? The ire rained down on him was previously the reserve of former scapegoat-in-chief Dean Mumm, a man widely respected and revered at Exeter, but who often faced ridicule and derision back home.

Is it the wavy blonde hair? It’s not a sensible, set-your-watch-to-it Richie McCaw do, but some of the shocking barnets seen in Wallaby teams of the past decade indicate the hair isn’t to blame.

Is it the name Ned? While legends of bygone eras had solidly boring names like John, David, Glenn and Ken, chances are the name Ned instantly transports the image of Flanders in to your brain, thus negating the fear factor which he has the potential to gain in the next few years.

Still, having the same name as a fictional religious do-gooder is not a strong enough case to dislike him.

Is it the pathway? Ned did attend certified blue-blood rugby nursery Joey’s in Sydney (the list of Wallabies produced being mightily impressive), and plies his club trade for the famous Randwick, but many have trod a similar path without the associated vitriol.

The fact he is from the country should count for something, as despite the ever-real struggle of country rugby (and sport in general) in the modern age, it is still heartening to know that country kids can still hold on to the dream of attaining a Wallaby jersey. 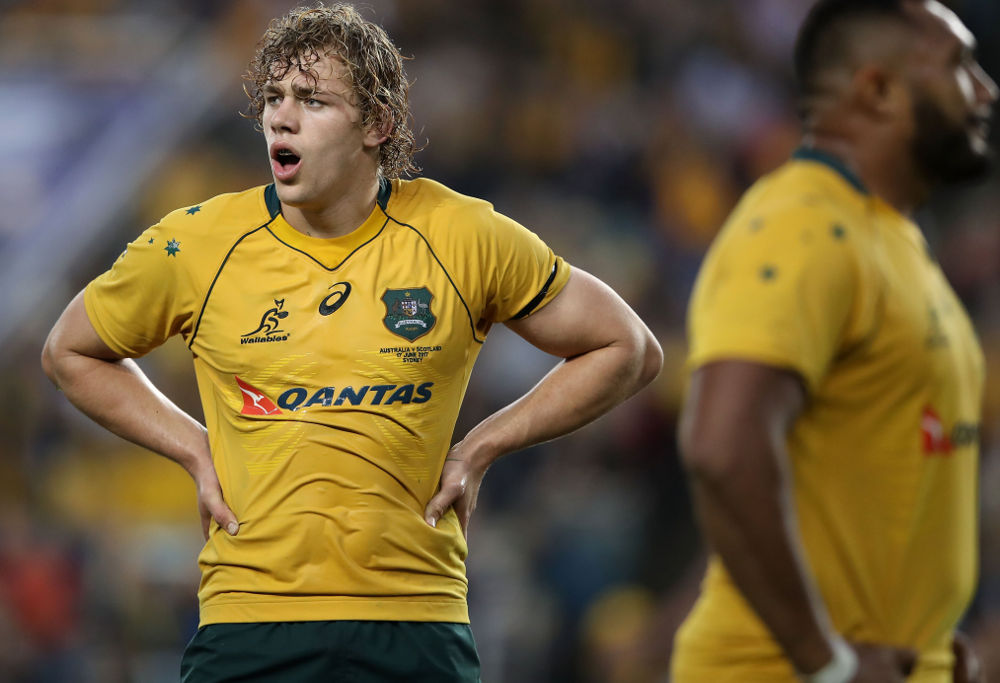 Ned Hanigan of the Wallabies. (Photo by Mark Kolbe/Getty Images)

Seemingly, Ned just so happened to be a guy with plenty of potential thrown in to the deep end of Test rugby at the exact moment Australian rugby was suffering a collective nervous breakdown, with the incessant negativity (much of it justified) distorting and warping everything seen and discussed in the annus horribilis that was 2017.

The creeping paranoia which abounds unchecked in Australian rugby (thanks in no part to the anti-midas touch with which Rugby Australia applies to all their PR) has meant accusations regarding NSW favouritism and factions consistently crop up, and Ned’s youth and inexperience has resulted in him being caught in the crosshairs of these emotive arguments.

Hanigan’s Test match shortcomings were there for all to see in the June Tests and the Sydney massacre, which prompted the initial social media pitchforks, but by Bledisloe 3 and the end of year tour, much improved showings increased his stock, with begrudging praise forthcoming (“He had a pretty good game….by his standards” being the general refrain).

Not everyone can be Maro Itoje, bursting on to the Test scene at 21, putting in dominant displays against men much older, wiser and experienced than him while racking up European Cups, Six Nations Grand Slams and British anda Irish Lions caps along the way. Standing at 194cm and 110kg, Hanigan has all the basic tools necessary to become a dominant force and forward pack main staple for the next six or seven years, much like Itoje presently is for England.

The initial dye has been cast though, and his selection this week in the Wallabies squad despite currently being injured caused bewilderment among many, but if he comes back from injury stronger and hungrier to prove the many naysayers wrong, the 2019 World Cup could well be the platform to prove he is the man.