Jamie Maclaren, the tactically astute yet surprising final selection for the Socceroos

The biggest surprise in Bert van Marwijk’s final Socceroos squad was the inclusion of Jamie Maclaren.

The striker, of course, had been originally omitted in the original 27-man squad, despite an impressive end-of-season goalscoring run at Hibernian, but took his opportunity when serious doubt was cast over Tomi Juric’s fitness for the World Cup.

Maclaren has long been touted as a potential no.9 for the national team. Although he showed talent in fits and spurts while at Perth Glory, he was merely the supporting act to Andy Keogh.

That changed at Brisbane, where John Aloisi made him his first signing as Roar coach and immediately put him in the starting XI.

That faith was quickly justified, with Maclaren scoring 14 goals in the opening 11 games of the 2015/16 season – the best goalscoring start of any Australian in national league competition.

He finished with eighteen in the regular season, adding two more in the finals, and finishing second in the Golden Boot – before going one better the following year, scoring nineteen goals and winning a joint Golden Boot (along with Besart Berisha). 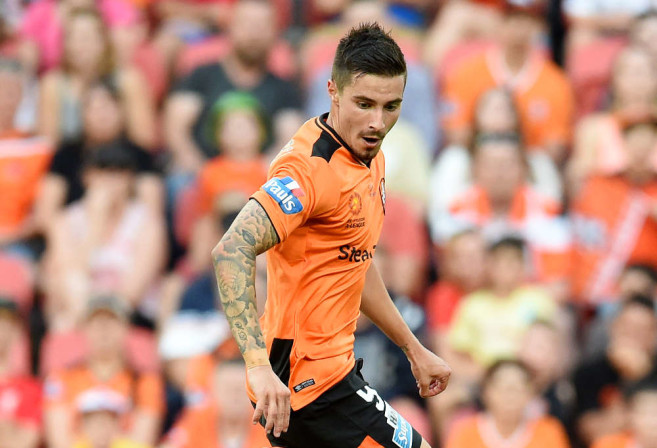 He stays high up the pitch, level with opposition centre-backs, and is rarely involved in build-up play. Instead, he positions himself on the blindside of defenders, out of their line of sight.

This means he can get free, away from their marking, and attack deliveries or through balls quickly. His rapid acceleration, combined with the blindside positioning, means he can surge away from defenders and find space inside the penalty box to shoot.

Unsurprisingly, 16 of the 39 goals Maclaren scored at Brisbane were from inside the six-yard box – that is the space in which he comes alive to find shooting opportunities.

Maclaren’s incessant focus on scoring goals, and moving into goalscoring positions, was perfect for Brisbane because he occupied opposition central defenders and was always a threat to run into space in behind the last line.

He particularly likes to peel away on the far side to the ball, sometimes as wide as the opposition full-back, to create space to run diagonally in between and in behind defenders.

Accordingly, opposition defences drop off, to reduce this space – which in turn, for Brisbane, opened up space between the lines for the playmakers, Thomas Broich and Dimitri Petratos.

Why, then, has Maclaren not yet transferred club form to international football?

Part of this is due to selections, in some cases small windows of opportunity and against tough opponents such as England, and in other circumstances due to Postecoglou’s preference for other players, but it is also linked to Maclaren’s style of play.

While Maclaren is an effective goalscorer, it is a truism of modern football that strikers must do more than score goals.

This oxymoron exists because of the increased emphasis put on pressing, build up and combination play at the highest level – all of which the striker must contribute towards beyond simply being in position to score the goals.

It is why Juric was often preferred over Maclaren under Postecoglou. Juric is capable of holding the ball up in build-up play, making runs to drag away defenders and knocking out passing lanes when he presses.

This made him a more valuable contributor to the type of football Postecoglou wanted to play, when compared to Maclaren.

This is a general analysis, but it is also borne out in Van Marwijk’s selections and systems so far.

The Dutchman is idealistically opposite to his predecessor, preferring a narrow 4-2-3-1 with an emphasis on structured, organised lines of defence and quick, rapid counter-attacks.

The striker in this system has to be an outlet in transition moments, capable of carrying the ball over large distances and most likely, with little attacking support.

This is why Nabbout has started as the no.9 in two of three friendlies so far. He’s a powerful, energetic forward who can lead Australia’s counter-attacks.

Maclaren could probably do this role, too, given time and coaching, but right now, Nabbout can do it better. In the time-pressurised environment of international football, that is crucial for Van Marwijk.

Why, then, take Maclaren at all? Inevitably, a coach needs multiple options if his first strategy is nullified. Maclaren is something different off the bench, a striker Australia can use to chase the game if needed. 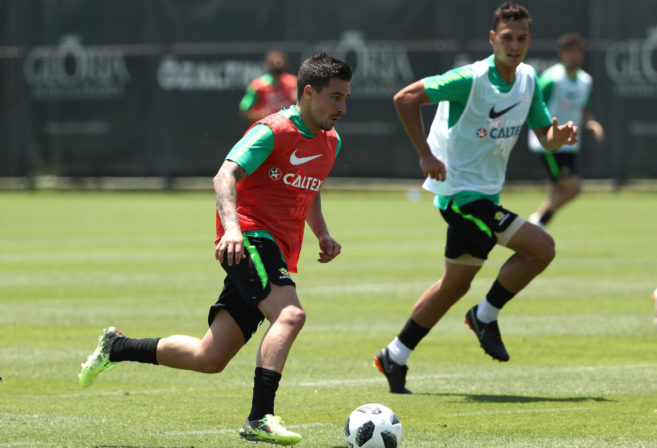 He can attack tired defences and be a penalty box threat if the opponent is under sustained pressure.

Cahill is similar, but obviously, an aerial threat – and in truth, a talismanic selection who can provide experience and will help drive the squad culture. Cahill is an emotional selection and a completely valid one.

But Maclaren is a tactical choice – a striker who can provide something very specific which may prove very crucial in the way that Australia’s games pan out.

Possibly, at present, he lacks the wider skills to be a genuine starting player for the national team.

Nevertheless, he is an intriguing wild card for Bert van Marwijk: a striker who, perhaps surprisingly, is good at scoring goals.

With the Socceroos facing their busiest calendar year, the decision to postpone World Cup qualifiers due to the coronavirus outbreak creates a fixture headache. 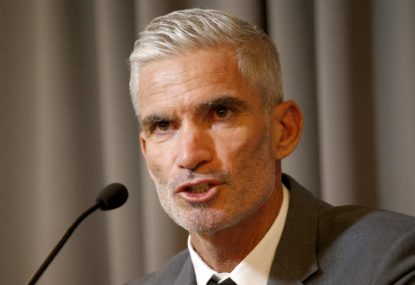 Australia’s charge towards booking their automatic ticket to the 2022 FIFA World Cup in Qatar has been put on hold due to the outbreak of coronavirus.