The New South Wales Blues have won the opening match of the 2018 State of Origin series, getting over Queensland in a fast-paced, entertaining encounter by ten points. Here are The Roar‘s player ratings for a side featuring 11 debutants.

If you want to see how the Maroons fared, check out the Queensland player ratings for Game 1.

1. James Tedesco – 9.5
This was just about the perfect performance from Tedesco, who was rightfully given man of the match. He finished with a stats line detailing 221 metres from 19 runs, a try, two try assists and a line break to go with 12 tackle busts.

He also set up what turned about to be the game-winning try, breaking through the line before Josh Addo-Carr went over in the corner.

It was hard to fault Tedesco, who came more and more into his own as the match went on. The fact anyone was ever questioning his Origin spot now seems laughable.

2. Tom Trbojevic – 8.5
Tom Trbojevic made a debut which suggests he belongs at this level. Even playing in his non-preferred wing position, he silenced the doubters with a superb performance. Trbojevic’s defence was the main mark of his game, with the winger having to defuse multiple bombs in the second half and stop raids down his side of the field.

Trbojevic was able to hold position well and shut down the Maroons, while his attack was also superb. He was involved in everything, regularly running out of dummy half through the middle third of the ground, having a try and 141 metres to his name by fulltime.

3. Latrell Mitchell – 7.5
In such an inexperienced back line, Mitchell did a good job. The Roosters centre scored a try and made a few other breaks, with the defence finding the centre difficult to shut down at times. 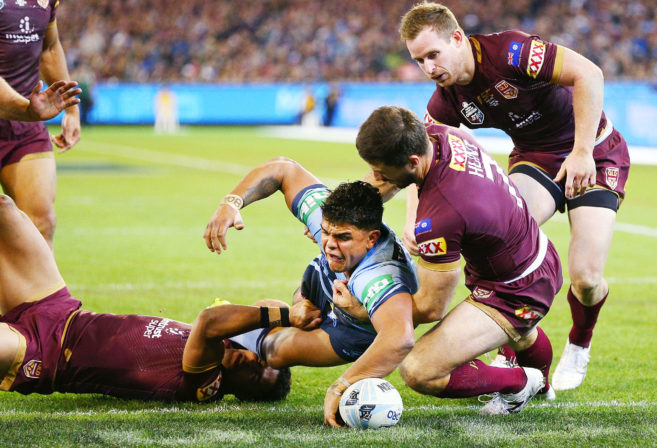 4. James Roberts – 5.5
There was nothing spectacular for Roberts in his Origin debut – not least leaving the field roughly seven minutes early for Tyrone Peachey – but some of his runs lacked lustre and he didn’t search for the ball enough. His defence on Greg Inglis was top-class though, with neither of his two missed tackles affecting the Blues.

5. Josh Addo-Carr – 8
An absolutely splendid debut for the Melbourne winger. He did what he needed to do in defence for the most part, but it was his attack which he was picked for and his attack which flourished in Game 1 of the series.

Addo-Carr finished the match with a try, eight tackle breaks and two line breaks after a barnstorming first half where the Blues were only too happy to spread the ball early in the set to get him involved.

6. James Maloney – 8.5
Maloney was strong during the first half, ensuring the Blues would control the action, but completely took over in the last half hour of the match. From the moment the Blues hit the front in the second half, he put every kick on a five-cent piece and controlled the game.

Unfortunately, he did throw the intercept for Valentine Holmes try, but he was still amongst the Blues’ best.

7. Nathan Cleary – 7
Cleary made a superb start to his State of Origin career. The 20-year-old, lining up alongside his Panthers teammate, had a willingness to get involved with the ball in hand and take the line on whenever an opportunity presented itself. While it didn’t come off for him, his kicking game and defence was also solid.

Cleary is going to have a long career in the sky blue. 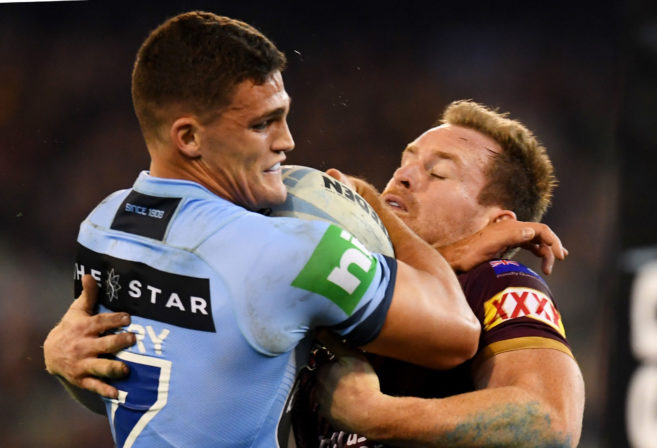 8. David Klemmer – 7.5
Klemmer started Origin 1 like a house on fire. He was averaging well north of ten metres per run, but then missed a large chunk of the game as Brad Fittler rested him.

The Bulldogs prop didn’t play a second stint like his first, but he was still strong in helping the Blues battle out of their own end. He ended with 141 metres from just 13 runs.

9. Damien Cook – 9
If there were any questions over Cook’s defence leading into the first game of the Origin series, they have been extinguished in record time.

The Rabbitohs hooker came up with a stirring 80-minute performance, barely putting a foot wrong as he made 52 tackles, a bunch of great runs out of dummy half picking lazy marker defence whenever the chance presented itself and also setting up a try. The chance for anyone to claim Cook’s nine jumper seems to have evaporated after Game 1.

10. Reagan Campbell-Gillard – 6
Campbell-Gillard had some good plays throughout the course of Origin 1, running 91 metres from nine runs. Despite that, he will be under the pump to pick up his level of input in Game 2, with the man known as ‘RCG,’ under fire from other props who want his spot.

While the ten metres per run indicates his flexibility to bend the Queensland line, there simply wasn’t enough of it for Campbell-Gillard to pop out at the top of this list.

11. Boyd Cordner – 8
This was a captain’s knock from Cordner. Last year, people were critical of his leadership, but those thinking the same after last night must have rocks in their head. The second rower bucked in and did the hard yards whenever required, looking dangerous on more than a few occasions with the ball in hand.

He finished the night with 153 metres and 29 tackles.

12. Tyson Frizell – 7
Frizell was a tackling machine with 35, giving him the equal second-most behind Cook for any Blues player. While Frizell’s defence was great from start to finish, he was also superb, especially early, with the ball in hand. He threatened to break the Maroons line a number of times and succeeded on three of them.

While he didn’t score or create one, he wasn’t far away on more than one occasion. 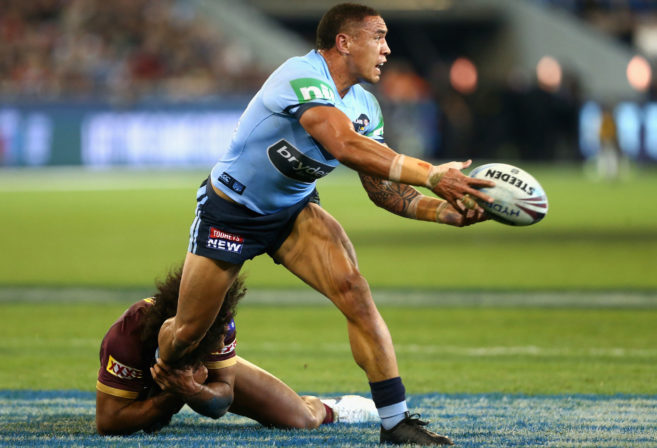 13. Jack de Belin – 5.5
Solid without being spectacular is how you’d rate de Belin’s debut. He was involved early, then just did his job when he was on the park which admittedly wasn’t for a great deal of time given he went off midway through the first half and didn’t return until late in the second.

14. Paul Vaughan – 5
Not a bad debut for Vaughan, but it’s hard to say it was a great one. He was solid off the bench for the Blues, making 64 metres and having some good runs, but he didn’t see the ball that often or do enough to have a real impact on the contest.

15. Jake Trbojevic – 6.5
There were some surprises at the selection table this year and Jake Trbojevic being demoted to the bench was one of them. He is seen as the future Australian lock, but couldn’t get a start for his state in Game 1.

He showed exactly what sort of impact he can provide though, playing big minutes from the pine and ending with the equal second-most tackles for the Blues alongside Frizell, as well as picking up nearly 90 metres across eight runs.

16. Angus Crichton – 6
You could hardly criticise Crichton for his Origin debut. Not being utilised until the second half, the second rower was strong from the bench, picking up 51 metres and 33 tackles to go with a couple of offloads which went close to sparking things for the Blues at times.

17. Tyrone Peachey – 3
It’s hard to give Peachey anything higher than a three, given he only played a small handful of minutes. It’s a shame, because he actually made an impact when he came on with a couple of good runs. He tried to create every time he touched it as well, picking up 30 metres for his effort.

Definitely won’t be dropped for Game 2.