In his playing days, Trevor Gillmeister was known as The Axe.

But Queensland have given him a new moniker ahead of Sunday’s must-win State of Origin game two in Sydney – the Minister for Defence.

The Maroons have turned to former hard man Gillmeister to plug their defensive leaks after Queensland missed a staggering 55 tackles in their 22-12 game one loss in Melbourne.

Ex-Queensland skipper Gillmeister earned his colourful nickname for his uncanny ability to chop down opponents and his tackling style will be drilled into the Maroons from their first training session on Wednesday.

“I think the emphasis early on at camp will be defence.

“But we’ve got the Minister for Defence Trevor Gillmeister in relation to tackling technique and positional play so he will obviously play a fair role in our preparation this time.”

Queensland coach Kevin Walters was confident Billy Slater would also help revamp their defence by marshalling the troops from fullback after returning from a hamstring injury.

Slater is set to play Origin No.30 after pulling out just days before game one at the MCG due to the injury.

Walters said Melbourne’s Tim Glasby was another potential solution to their defensive woes.

Glasby is on standby for prop Dylan Napa (ankle) who must prove his fitness by Wednesday.

Glasby impressed in the final two games of last year’s series, helping Queensland stiffen their defence and bounce back from a record home loss to claim yet another series win.

“We need to stop NSW from scoring points and I couldn’t think of a better man to do that than Tim Glasby in the middle of the field,” Walters said.

Walters said the Maroons were confident of shutting down game one man of the match – NSW fullback James Tedesco – after doing the same to Blues forward Andrew Fifita last year.

Fifita inspired NSW’s record 28-4 game one triumph at Suncorp Stadium before the Maroons muscled up to claim their 11th series win in 12 years.

“After Andrew Fifita ran through us in game one…we fixed it up in game two last year and that has to be our mentality for this team as well,” Walters said.

‘I congratulate the NRL for making such a strong statement… something should be done about it, it doesn’t include Indigenous people at all.’ Meanwhile, Preston Campbell has spoken about what the All Stars match meant to him and why it’s so important. 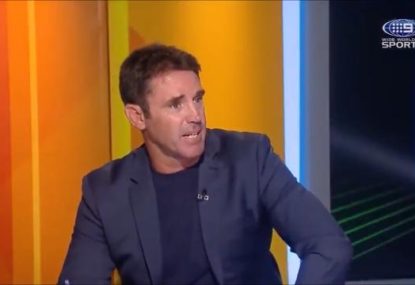 All Stars to trial captain’s challenge

The proposed captain’s challenge will face its first test ahead of the 2020 NRL season with the new rule to be trialled in the All Stars match this weekend.

All Stars to trial captain’s challenge

Pre-season. Footy is just about here, and after the Nines last week, tomorrow we get our first taste of the 80-minute variety as the Indigenous All-Stars take on the Maori All-Stars.