The key tactical battleground in Australia's crucial match against Denmark

This has become the defining feature of Bert van Marwijk’s tenure. Whereas under Ange Postecoglou, Australia defended through pressing and trying to win the ball high, now the strategy is about being compact, structured and getting numbers behind the ball quickly.

This often involves moving quickly into a 4-4-2 shape, with the No. 10 and No. 9 quickly blocking central areas of the pitch, looking to deny the opponent from playing through these areas.

The two central midfielders, Aaron Mooy and Mile Jedinak against France, rarely stray from their position in front of the back four both with and without the ball, so there is always a solid shape down the centre of the pitch to protect against counter-attacks.

They also have an important role when the opponent controls possession for long periods. In these moments, the two No. 6s block passes into players behind them, between the lines. Against France, with their fluid front three of Antoine Griezmann, Kylian Mbappe and Ousmane Dembele, this was crucial. 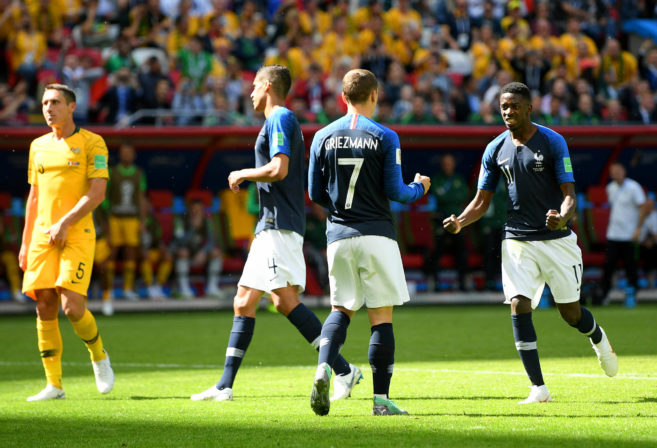 The three forwards constantly interchanged fluidly between their positions, positioning themselves in pockets of space behind Australia’s midfield line Mooy and Jedinak’s role was to screen, by constantly scanning over their shoulder and adjusting their position to block passing lanes from deeper midfielders into more advanced players.

This can be more difficult than it sounds. It requires midfielders to focus on two sources of information – one in front, one behind, and make decisions quickly according to what they see.

Clever forwards will adjust their position in the moment when their screener looks away or at the ball, and so the screener must scan again to block the passing lane.

Blocking forward passes is easier when there are more numbers behind the ball, which is something Australia did well. Matt Leckie and Robbie Kruse, hard-working attackers selected for their ability to cover high distance diligently, dropped back alongside the 6s to create a midfield line of four.

This is what creates a ‘block’ – getting organised in a defensive shape, being compact as a unit and protecting key spaces, in this case, the midfield zone, between the lines.

This benefits the centre-backs, too. Trent Sainsbury and Mark Milligan very rarely had to step forward out of their position to press players between the lines. This meant they weren’t being dragged out of shape at the back, which can create gaps for forward runs and forward passes.

Noticeably, the key defensive moments were from balls played in behind – for example, Trent Sainsbury’s superb over-the-head control inside the penalty area from a lofted ball into the box – rather than perhaps a centre-back having to dash forward to intercept a pass into an attacker.

On the same note, it’s telling that France’s second goal came when they were able to drag a centre-back out of position. The introduction of Olivier Giroud caused real problems for the two No. 6s, who now had to block passes into both a No. 9 playing high (Giroud) and a No. 10 between the lines (Mbappe).

Additionally, Giroud cleverly positioned himself in the same receiving line as the No. 10, as to block the view of the centre-back who might have to step forward and press the player between the lines.

This was the one time France were able to play quick combinations – breaking through Australia’s midfield screeners to be able to drag a centre-back out of the defence and create gaps to penetrate into.

This becomes particularly pertinent considering the tactical identity of the next opponent, Denmark.

Denmark’s 4-2-3-1 revolves around Christian Eriksen as the No. 10, who moves intelligently between the lines and is adept at finding space to receive. Mooy and Jedinak will need to be very aware of the playmaker’s movement, as this is Denmark’s primary route to goal.

As with Giroud, the positioning of the No. 9, Nicolai Jorgensen, might be key. Positioning on the same side as Eriksen could create space whereby the No. 10 can get free by moving into a new line of pass away from Jedinak or Mooy in front of him, in the moment when the No. 6 looks at the ball, and Jorgensen can occupy the centre-back to prevent him from stepping up to close down Eriksen.

Alternatively, if the centre-back does step forward, this is the moment to look to get in behind.

The positive for Australia is that these moments are few and far between. Whatever your opinion of the new style of play, it is hard to deny that the side have transitioned to it very quickly.

Australia’s defensive block is very hard to beat – albeit with a few opportunities for opponents to exploit – and the tactical ‘battle’ between Eriksen and Australia’s 6s will be key to this crucial group game.