The Liebke Ratings: State of Origin 2

Traditionally, there’s always so much to look forward to in the second match of any State of Origin series.

Here are the ratings for the second State of Origin 2018.

The aftermath of that match was notable for the inexplicable controversy over Queensland’s Karina Brown and New South Wales’ Vanessa Foliaki sharing a post-match kiss. It was unclear what all the fuss was about, especially given that one of the most iconic photos in State of Origin history is that of Gorden Tallis and Terry Hill face to face, in one another’s arms, maroon and blue intermingled, eyes locked together with palpable sexual tension simmering.

You know the one.

But it wasn’t just the women’s State of Origin fixture and its aftermath that had people talking in the lead-up to this match. There was also the men’s game being played on a Sunday night as part of a stand-alone weekend of representative football.

Some people objected to this change, claiming that it broke with tradition, shortened the players’ preparation time and was only being done for the benefit of Channel Nine’s ratings. It may also have faded the curtains.

Less of a pre-game talking point and more of a that-mmm?-sound-you-make-when-trying-to-feign-interest-despite-almost-total-indifference-ing point was the news that Darius Boyd had announced his representative retirement.

Cheers, Darius. Thanks for letting us know. 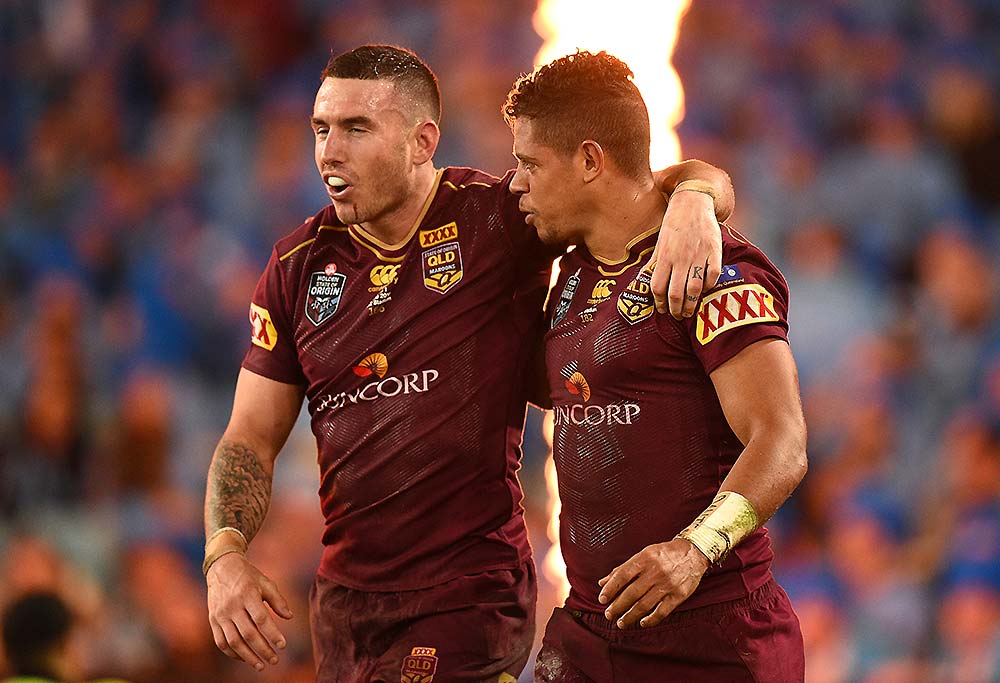 Confidence
Grade: C+
New South Wales went into the game full of confidence after Game 1 but also full of wariness that their fullness of confidence in the same position last year led only to a 2-1 series loss in the fullness of time.

It was a tricky balance. And a balance that seemed to have gone terribly awry early for the Blues when Queensland winger Dane Gagai went over in the corner. The Bunker, however, correctly ruled no try on the basis that Gagai has scored far more than his share of Origin tries already.

Not that this deterred Queensland. With Billy Slater sensibly not being injured for this match, he was involved in everything, and Queensland soon raced to 0/28 after three overs, with Travis Head on fire.

Sorry. That was the England v Australia ODI taking place at the same time over in Manchester.

Back in Sydney, Queensland raced to a 10-0 lead after tries to Valentine Holmes and, inevitably, the greediest man in rugby league Dane Gagai.

Penalty tries
Grade: D
New South Wales were reeling. Should coach Brad Fittler have stuck to his Game 1 tactics of selecting a team made almost entirely of debutants? Were these one-game veterans now too traumatised by Origin to handle a repeat showing at this level?

Nope. First, Josh Addo-Carr showed his rarely seen dancing feet to jag back in off a cut-out pass and reduce the margin to four. Then the Blues hit the lead after Gus Gould in commentary awarded them a penalty try when Boyd Cordner was taken out leading the chase for a kick into the in goal.

It was a bold but correct decision from Gus and the rest of the team in The Bunker. Oh, sure, King Wally Lewis mused at half-time about the fundamental unpredictability of the cosmos and whether we can ever be certain about anything. But rugby league has no time for that kind of philosophical guff. Not even from their royalty. 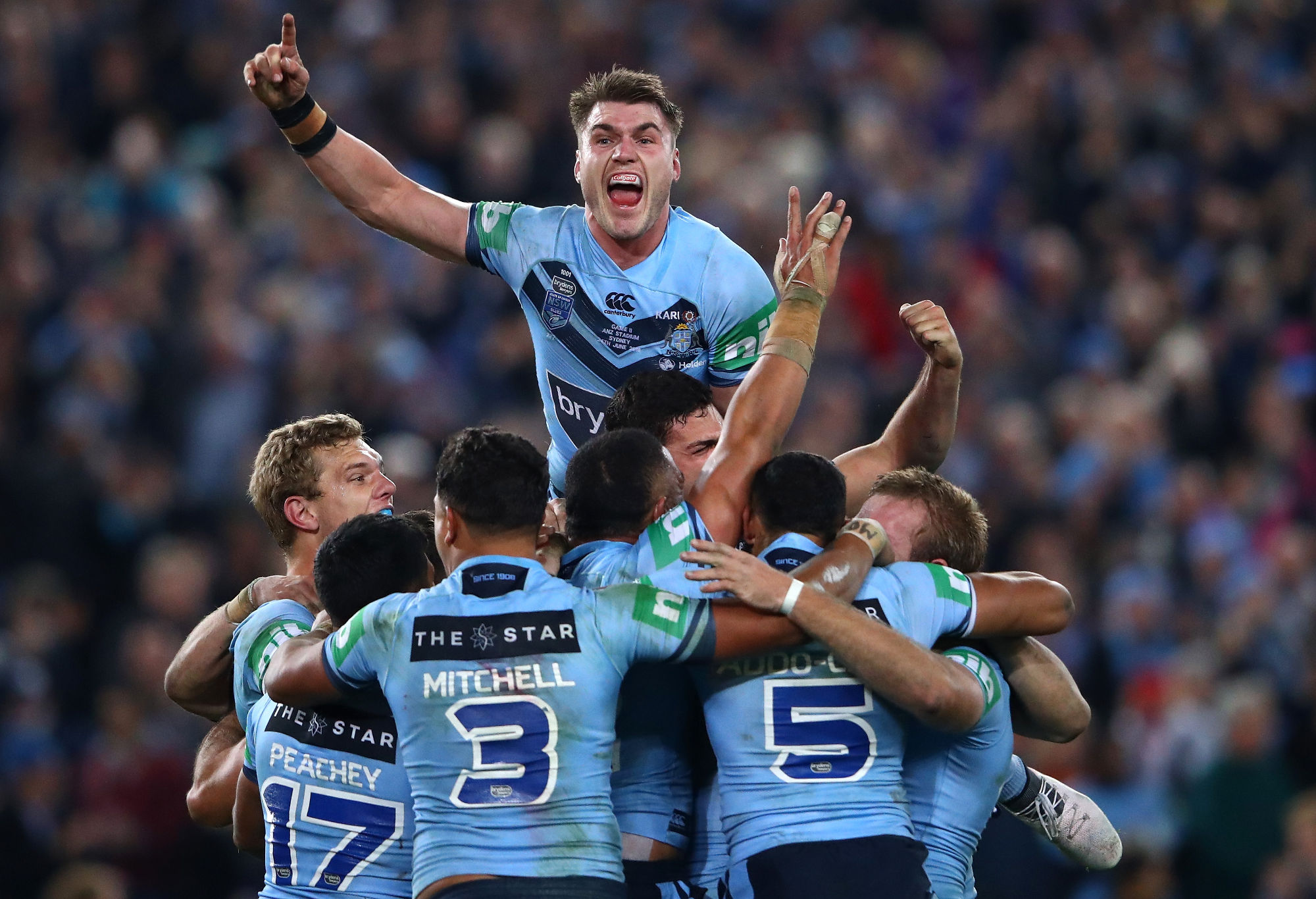 Angus Crichton of the Blues (Photo by Cameron Spencer/Getty Images)

Latrell Mitchell
Grade: B-
Returning for the second half with a 12-10 lead, New South Wales soon extended that to 18-10 after Latrell Mitchell muscled his way over for a try.

Mitchell, who began his career as a Jeep Cherokee, was not just devastating in attack. He was also brutal in defence, at one point hammering Cameron Munster into the ground for seemingly no reason other than that he was an opposition player who had possession of the football at that moment.

These Blues young guns were willing to try anything.

Securing series
Grade: B+
But Queensland weren’t about to give up. Indeed, they’re contractually obligated not to do so. First, Will Chambers scored in the corner to make the score 18-14.

Then James Roberts was sin-binned for committing a professional foul. Or, at the very least, an amateurish foul that was happy to be paid in cash.

As a result, New South Wales were reduced to twelve men for most of the last ten minutes of the game. This was a sentence that, throughout the previous decade of Origin football, would have spelled certain doom.

And yet, somehow, the Blues hung on for a tough victory that secured them the series. Was it the passionate crowd that got them home? The innate sense of belief from a new generation of stars? The absentee leadership of a heavily concussed Cordner?

Sure, perhaps. But it was also mostly the lack of Queensland finishing polish due to the absence of retired Maroons legends such as Cameron Smith, Johnathan Thurston and Cooper Cronk.