Honda still firing on all cylinders for Japan

Keisuke Honda is a man that divides opinion.

The bleached blonde midfielder has never been shy of an opinion throughout his career, even declaring Japan was good enough to win the World Cup in the lead up to Brazil four years ago. Confidence has never been in short supply.

He was also an outspoken supporter of the decision to remove former coach Vahid Halilhodzic just two months before the World Cup, a decision many saw as a move to ensure Honda earned a spot on the plane to Brazil and to placate nervous sponsors back in Tokyo, declaring:

“I don’t have any regrets (about the change of leadership),” he said last month. “To submit me to the kind of football Halilhodzic played in order to get picked, that would be shameful for me.”

After breaking onto the scene in South Africa with a series of standout performances that led Japan to the Round of 16, a lot was expected of Honda and Japan in Brazil, but like the rest of the team he flopped badly and gradually over the last four years his output for the national team has declined.

And so it was that he and the Samurai Blue arrived in Russia bereft of form. Did he still have one last hurrah left in him? One final push to show his fans, and fans of the Samurai Blue all over the world, what he was capable of? 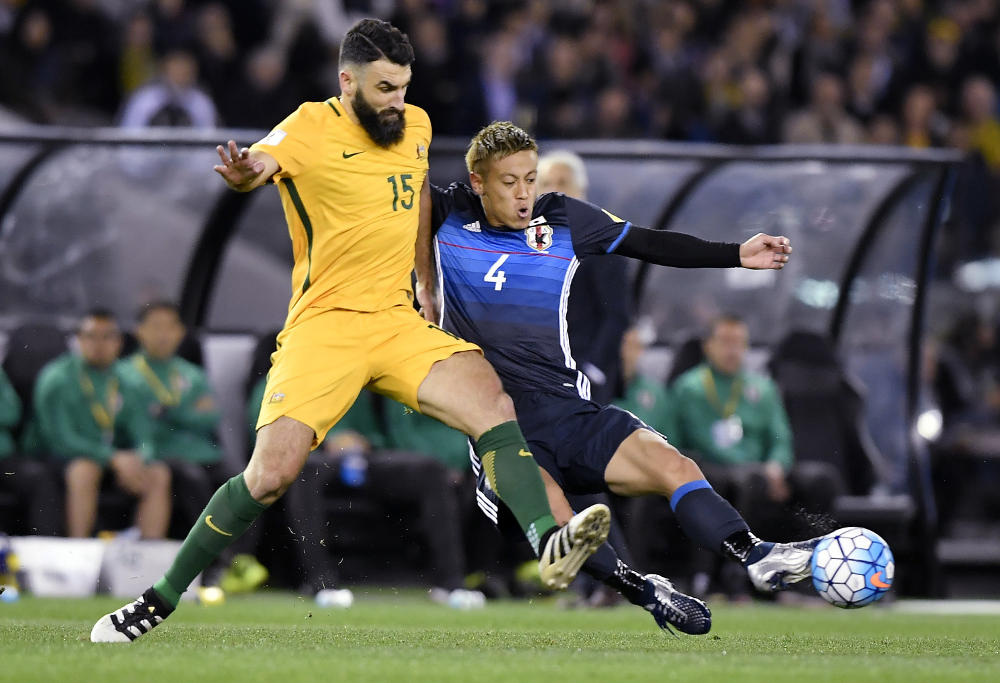 To the surprise of many, new coach Akira Nishino opted to start Honda on the pine for the opening two matches, with the former Gamba Osaka tactician preferring Shinji Kagawa in the number ten position.

But while the Club Pachuca midfielder has been limited to just 42 minutes off the bench, his impact has been immense.

In the opening game against Colombia he came on for Kagawa with 20 minutes remaining and with Japan struggling to find a way through a stubborn Colombian defence that had been playing with ten men since the third minute.

Yet within three minutes Honda had changed the game, providing an inch perfect corner for Yuya Osako to head home and give Japan a deserved, and hard fought, 2-1 win. It wasn’t just his assist either, it was his calmness and experience on the ball in the frantic final ten minutes that helped get Japan over the line for a famous victory.

You know when sometimes a win is more than just a win? This was one of those wins.

Then on Sunday night (Australian time), he came off the bench again and within minutes had drawn the four-time Asian champions level with Senegal, earning a valuable point that has put one foot in the Round of 16 for the Samurai Blue ahead of their match on Thursday against the already-eliminated Poland.

In the process he created a slice if history, becoming the first Japanese player to score at three FIFA World Cups, taking his overall World Cup tally to four – almost half of all World Cup goals Japan has scored in their last three World Cups.

He is their talisman. Their barometer. When he does well, Japan does well.

If he can find one or two more against Poland, and perhaps in the Round of 16 and beyond too, he would join an elite group of players with five or more World Cup goals.

His greatest challenge is yet to come though. While the odds are in Japan’s favour, they still need to get the job done against Poland. A win would secure top spot in the group. Who thought we’d be saying that just ten days ago when few people gave Japan a hope of winning a game, let alone topping the group?

And should they get through, a tougher challenge in the form of Belgium or England will await. While on paper few would give them a chance, this team has shown already it is made of tougher stuff than we thought. Who knows what could happen. It’s a challenge Honda will relish if given the opportunity.

In any case, just making the Round of 16 would be an achievement given where Japan was two weeks ago, let alone two months ago. A series of poor results and performances in warm up friendlies had optimism levels in Tokyo at an all-time low.

Even defender Maya Yoshida conceded the mood inside the camp wasn’t a good one after their loss against Ghana.

But somehow they’ve found a way to turn it around, going undefeated in their first two matches for the first time since they co-hosted the tournament in 2002, and the resurgence of Honda has been a large part of that.

The 32-year-old has admitted this is likely going to be his last World Cup, and while he may be reduced to an impact player of the bench, he’s making sure he’s going out the same way he came in back in 2010 – with a bang.

On another note, wouldn’t it be great if we saw him strutting his stuff in the A-League next season?