There have been 113 games played between New South Wales and Queensland in State of Origin. Queensland have won 60, and NSW have now won 53 after Sunday night’s terrific win.

Interestingly, in terms of total points scored NSW has now scored 1499, whereas Queensland has scored 1483 points, which might surprise a few people north of Tweed Heads.

That’s one of the differences between Blues and Maroons supporters. For a NSW supporter, every single point counts. It’s not about the number of games won, or the number of series that have been won. Forget about all that rubbish. It’s TOTAL points!

With a few minutes in the game to go, when it was all on the line, I started to wonder what Cameron Smith would have done or even the great Wally Lewis?

Surely Alfie or Darren Lockyer would have conjured up a try right at the death, but on Sunday night it never looked like happening.

What was Hunt thinking when he kicked on the third tackle by the way?

Now the 2018 series is over, and Queensland’s boring domination of State of Origin is surely dead and buried, I thought it would be an interesting exercise for an unashamedly biased NSW supporter to rank every Queensland State of Origin captain for the intangible we know as ‘inspirational leadership’, and at a time when NSW supporters can really rub it in.

Queensland has had 13 captains. Some were better than others, but it’s fair to say that each captain brought something different to the table.

In the case of Arthur Beetson, Queensland’s first captain, he played like he’d been sitting at a table for a few hours, and had brought along half a dozen pies that he polished off before he ran out onto the field.

Artie was coming to the end of a distinguished career and was knocking around in reserve grade for Parramatta when he was called upon to lead out Queensland for the historic State of Origin opener in 1980.

Artie played one game and is best remembered for starting the very first ‘biffo’ in State of Origin. For those who may not know, Beetson thought it would be a terrific idea to try and knock off the head of his Parramatta teammate, NSW and Australian centre Mick Cronin, which has become something of a tackling style tradition for Queensland captains.

Artie’s unprovoked attack proved to be a masterstroke for the future direction of the series. His cowardly punch was the genesis of the ‘state verse state’, ‘mate verse mate’ concept.

The following year, in 1981, NSW and Queensland decided to turn up and belt each other again. In truth, NSW players were just defending themselves.

This time the Queensland captain was a nuggetty bloke by the name of Wally Lewis. Over the next decade, the name Wally Lewis would send shivers up the spine of Blues players and supporters. 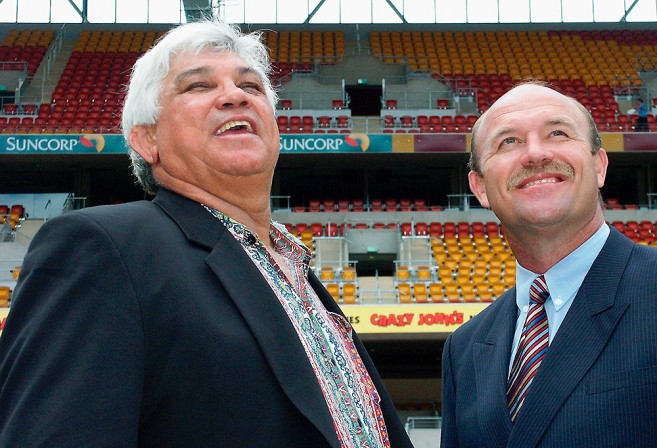 Like many rugby league followers, I thought Lewis was a genius on the football field, especially during the halftime break. The ‘King’, as he was known north of the border, worked out that you could shout obscenities at someone at halftime, call them every name under the sun, and not be penalised.

So, on a rainy night at Sydney Football Stadium in Game Two, Lewis ran up from behind and started hurling abuse at NSW’s Mark Geyer when they were walking off to the sheds.

Lewis was in Geyer’s face for about 30 seconds trying to goad the young 22-year-old into throwing a punch. It was State of Origin gold from the King!

Lewis went on to chalk up 30 games as captain for Queensland, which is the record for captaining the Maroons. Lewis played five-eighth, had the speed of a 58-year-old and gave five-eighths of a fingernail for playing within the rules.

He set the standard for his teammates to follow by belting NSW players long after they’d kicked or passed the ball, getting into the ear of referee Barry Gommersall, milking penalties, laying all over the NSW players in tackles, and basically getting under the skin of every Blues player and supporter with his constant niggle.

The third captain of Queensland was Paul ‘Fatty’ Vautin, a fiery blood-nut who didn’t know how to take a backward step. Unfortunately, Fatty wasn’t very good at taking a forward step either, and he was pummelled every time he tried to run the ball.

In the end, his Queensland teammates were reluctant to pass him the footy because they knew Fatty would be smashed and he’d end up being closer to his own goal-line than the point at which he’d received the ball.

Still, Fatty had a crack, which is all Queensland supporters ever want from their captains, so long as they lead the way with a bit of good old-fashioned biffo.

In 1992, Mal Meninga took over the captaincy of Queensland. By this stage, the State of Origin concept had really taken off, and people who didn’t even understand the rules of the game were tuning in all around the country to watch the all-in brawls.

Meninga is the top point scorer in Origin history, so the big bloke could certainly play.

His rugby league career is an impressive one, a man whose actions on the field were much more effective than any words he might try and use to inspire his teammates, especially if the one and only speech he made to declare his candidacy for the electorate of Molongolo is anything to go by;

“And the thing about that is, I guess, I was a public figure and I was put on the podium where I was just a person out there … I’m buggered, I’m sorry, I have to resign.”

What can we say about the fifth Queensland Captain, Trevor Gillmeister, a bloke who lived and breathed Queensland?

In fact, how he managed to breathe at all is truly amazing. When you look at vision of ‘The Axe’, he didn’t seem to have anything connecting his shoulders to his head. But the short answer to the question is ‘not much’.

In 1996, Allan Langer was given the Queensland captaincy. Even NSW supporters liked Alfie. He was quick, he was clever, and he was prepared to put his head on the chopping block.

In fact, everyone was trying to knock each other’s heads off, whether they were on the chopping block or not. 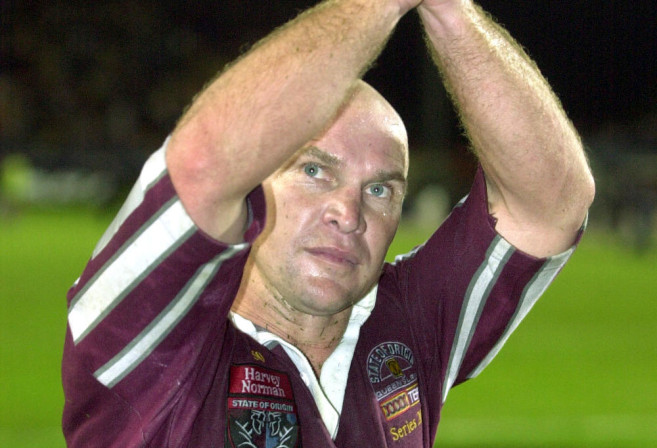 Alfie’s diminutive size and incredible evasive skills probably helped him to keep his head on when the fights broke out. In fairness to Alfie, he was a pretty clean type of player, which might explain why his run as Queensland captain was relatively brief.

This was the time of Super League and, when Alfie decided to jump ship and earn some coin, Queensland were in need of a halfback. Apparently, not a single player born in Queensland was determined to be good enough, so they changed the definition of ‘born in Queensland’ to allow Lam to play.

And you thought it was just Greg Inglis.

The next bloke to have the honour of captaining Queensland was Kevin Walters, although no one can be absolutely certain of this.

You see, Kevin had a twin brother called Kerrod who also happened to play a bit of footy. In the second State of Origin in 1999, Kevin had his one and only game as the Queensland captain, unless of course, it was actually Kerrod.

As it turned out, Queensland lost the match 12-8 so I imagine neither Kevin nor Kerrod are too keen to put their hand up for being a one time losing captain of Queensland, and a no time winner.

After Kevin (or possibly Kerrod), along came Gorden Tallis to lead the Queensland side around the park. ‘The Raging Bull’ captained Queensland seven times, and is best known for rag dolling NSW fullback Brett Hodgson in a tackle that began near the middle of the field and ended up over the sideline.

Tallis also gave away a lot of penalties, including being sent off in the opening State of Origin match for verbally abusing referee Bill Harrigan.

I can’t think of a bad word to say about the 10th Queensland captain Darren Lockyer – and I really tried.

I thought Lockyer glided across the park, read the play brilliantly, and had the silkiest of skills, whether he was playing fullback or five-eighth. I can’t remember him ever doing anything remotely dirty either. An absolutely brilliant player, and an inspirational captain. 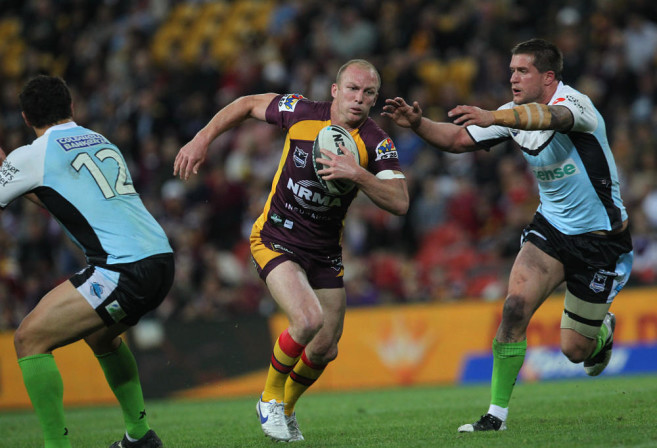 Darren Lockyer: one of the best (Digital image by Colin Whelan © nrlphotos.com)

In Game One, 2004, Queensland selectors went with hard-running front rower Shane Webcke as their 11th Queensland Captain. Webcke was as tough as they come, and had a ‘never say die attitude’.

Unfortunately for Webcke, the Queensland selectors had a slightly different attitude, and basically ‘you will die’ as captain unless you win, so when NSW won the game in golden point, Webcke was effectively dead and buried.

The fact that he wasn’t really into the ‘biffo’ probably didn’t help his cause either.

The arch enemy of NSW is Cameron Smith, who went on to captain Queensland 18 times.

Many experts who’ve seen plenty of rugby league believe he’s the greatest player of the modern era with his capacity to control the tempo of the game and to make the right decisions at critical moments in the game.

When you look at his stellar career, in both club and representative footy, it’s clear that he will go down in history as a legend of the game. I accept that.

But you know what? I just don’t like the bloke. Beneath the straight looking accountant exterior, Smith played like a ruthless cold-blooded assassin. He loved the ‘chicken wing’ tackle, which is where you pin the player on the ground and then yank the arm out of its socket – nasty stuff!

Smith also questioned every decision the referee made if it went against Queensland. In fact, a completely unreliable source once told me that Smith had compromising videos on every referee in charge of a State of Origin game that he played in, which is why Queensland always seemed to win the penalty count.

I’m happy to give him the benefit of the doubt on the videos. But I still don’t like the bloke.

Don’t get me started on the 13th Queensland Captain, Greg Inglis. His record speaks for itself. Two games. Two losses. Handy player, but not captaincy material.