If the England-Colombia game was a novel, it’d be the kind of thriller that relied on predictable violence leading up to a couple of late twists and then an ending no-one saw coming.

If the Belgium-Japan game was a novel, it probably hasn’t been written yet, but in years to come would become a classic – a poetic, romantic saga where even the losers gain something in the end.

Both books would be worth another read.

England have (temporarily at least) exorcised the penalty shootout demon that has sat on the shoulder of their national psyche like a vulture waiting to pick the bones of a slain animal.

However, Mateus Uribe struck the underside of the crossbar with the next penalty and Juliet disappeared from the balcony.

The Tottenham connection of Kieran Trippier and Eric Dier then held their nerve, while Jordan Pickford pulled off a save almost the equal of Ospina’s to ensure England advanced.

For 92 minutes, Colombia’s approach to the game seemed all wrong.

Despite the absence of James Rodriguez, they still possessed the kind of flair with the likes of Juan Cuadrado, Juan Quintero and Radamel Falcao to rattle an English defence that had not looked rock steady at any time in the tournament.

Instead, the Colombians decided on the muscular, niggling approach. The Three Lions are no shrinking violets though – the entire squad plays in the English Premier League, which is widely regarded as the ‘hardest’ league in the world.

It seemed unlikely that this type of approach from Colombia would upset them, until a desperate, last-minute shot was brilliantly clawed away for a corner by Pickford, and then Colombia’s towering centre-back, Yerry Mina, headed home for the third successive game.

England were finally rattled, and the Colombians headed into extra time with momentum.

Ultimately however, their reliance on the ‘dark arts’ didn’t bring them success in a knife-edge match of simmering tension and drama.

The day before, Japan weaved a poetic spell over Belgium and looked at one stage to be heading for the lofty heights of a quarter final showdown with Brazil. 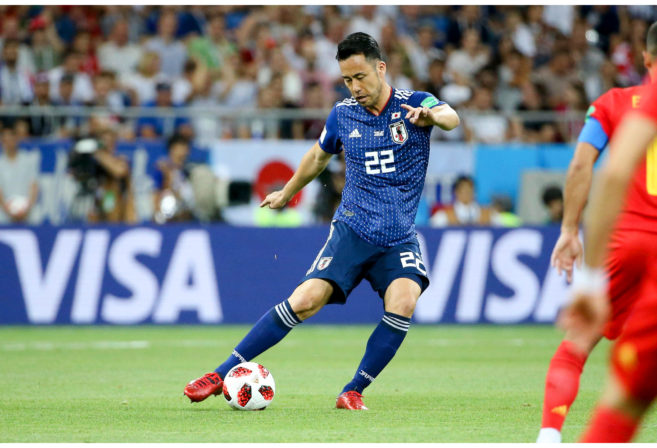 And yet victory somehow never seemed certain, even as the Samurai Blue headed into the last 20 minutes of the game with a 2-0 lead.

That they continued to attack and search for a decisive third goal instead of firing up the well-known football defensive bus might have seemed naive, but ask a certain Socceroos team of the 1990s about two-goal leads.

Belgium attacked incessantly – they had to, of course – but even when they had drawn level through Jan Vertonghen and Marouane Fellaini, both teams threw every attacking option at the opposition to create football nirvana.

Such was Japan’s insistence on believing they could win, that they had players in attacking positions as a 93rd minute corner was floated into the Belgian penalty area, only for it to be plucked out of the air by Thibaut Courtois and rolled out to the nearest defender.

Within the space of a few breaths, the Belgian players were joyously piling on top of scorer Nacer Chadli, the recipient of an incredible outside-inside run and dummy from Romelu Lukaku.

The game never had a chance to restart.

If there is honour in defeat, Japan found it. They were part of the best game of this tournament and many before it.

Widespread coverage on social media revealed the empty Japanese dressing room after their loss – left in pristine condition with a thank you note to the Russian tournament organisers.

Colombia’s exit was different – they went out kicking and swinging, unwilling to give an inch, doing whatever it took to remain alive in the tournament, stripped as they were of their most potent gunslinger.

Perhaps not as poetic, but with a certain admiration that they did everything they could.

Two sides to the football narrative as this epic World Cup story continues.