What the stats say about the Socceroos' failure to convert

The response to the Socceroos’ exit from Russia has reflected the grief cycle happening in real-time.

We’ve seen a hybrid of ‘denial’ and ‘anger’ coming from the SBS crew and elements of the Fox commentary. We’ve had tsunamis of misplaced bitterness directed at Bert van Marwijk’s substitutions.

SBS provided a bizarre assessment of cultural effacement about our lack of pressing in the last third of the Denmark game.

Then we’ve seen Ange Postecoglou on the Players Voice ‘bargaining’ with us about a lack of “courage” and an alternative Socceroos reality – in an amazingly myopic and revisionist take on the effectiveness of his approach.

Finally, the players and many pundits and fans have naturally slid into ‘depression’ and ‘acceptance’ – thanking Bert for the effectiveness of our defensive posture against three top-15 teams, and for giving us a chance (that we didn’t take) to steal more points from these opponents.

Grief is an inevitable outcome of being knocked out of tournament. If we avoid straying into meta-analysis of our ‘philosophy’, then the teams put out by Bert van Marwijk made chances but just didn’t convert them.

In the wake of our exit, most supporters agree that we could have got more from these three games but didn’t. So why didn’t it happen?

Generally speaking, pre-tournament fears about defending grimly didn’t come to pass. We averaged 51 per cent of possession across our three games, which was greater than Peru and Denmark, and created 11 shots per game – also greater than Peru (10.3) and Denmark (8.3), and only marginally behind France at 11.7.

A more subjective impression is that we bossed possession for large parts of the Denmark and Peru games, and unexpectedly both teams were happy to – at times – allow us to keep possession in the middle third.

Underlining how ‘in’ we were in this World Cup, we created 33 shots in our three games and conceded 25 to our opposition – if you take the France game out, we had 27 shots to the 14 Peru and Denmark (combined) created against us.

Of our shot chances in the two games against Denmark and Peru (combined) 17 (or 63%) were from within the penalty box – compared to a combined ten for Denmark and Peru (72%). The stark difference here, of course, is that although our opponents created fewer ‘good’ shot opportunities, they were more likely to be in good positions – despite being fewer overall.

That doesn’t sound too bad – but the killer stat is our lack of conversion.

Most damningly, we scored no goals from open play. Only seven of our 33 chances were on target (or 21% of them). Compare this to 13 of our opponents’ 25 (25%) against us and the gulf in conversion ruthlessness becomes clear. Removing the France game from this sample, we put six of our 27 shots on target (22%) versus Denmark and Peru (combined) who put eight of their 14 on target (57%).

So our fallible opponents, Denmark and Peru, created fewer chances than we did, however they were more likely to occur in the penalty box than ours were, and were put on target with clinical efficiency.

A curious addendum to this data is that we had vastly more shots blocked than our opponents (which aren’t included in the on-target figures). Of our 33 overall shots, 12 were blocked (five each against Denmark and Peru), compared to two of our opponents’ combined 25 against us. Some of these shots were blocked in good positions – think Robbie Kruse against Denmark – but most of these blocks came from set pieces, corners, and balls pumped into a sea of players in the box.

So while we had more open play shots on aggregate, they were a lower percentage of our overall numbers (56% versus 79% for Denmark and Peru).

Our lack of conversion into goals can be a product of either (or both) of creating them in low percentage areas or forwards just not finding the back of the net. Generally speaking, we attacked wide in this tournament – in fact, we were ranked 31st in attacking down the central channel (oddly just ahead of France), as only 20 per cent of our attacks were through the middle.

(For comparison, the top teams for central channel transitions were Scandiballers Iceland and Sweden, whose entire gameplan is a kind of Moneyball, predicated on defending grimly, conceding the ball, but then creating the highest percentage chances possible from minimal possession.)

45 per cent of our attacks came from the right – from Matthew Leckie ultimately – and Leckie was the most used attacking outlet in the entire tournament (all teams) with this number. 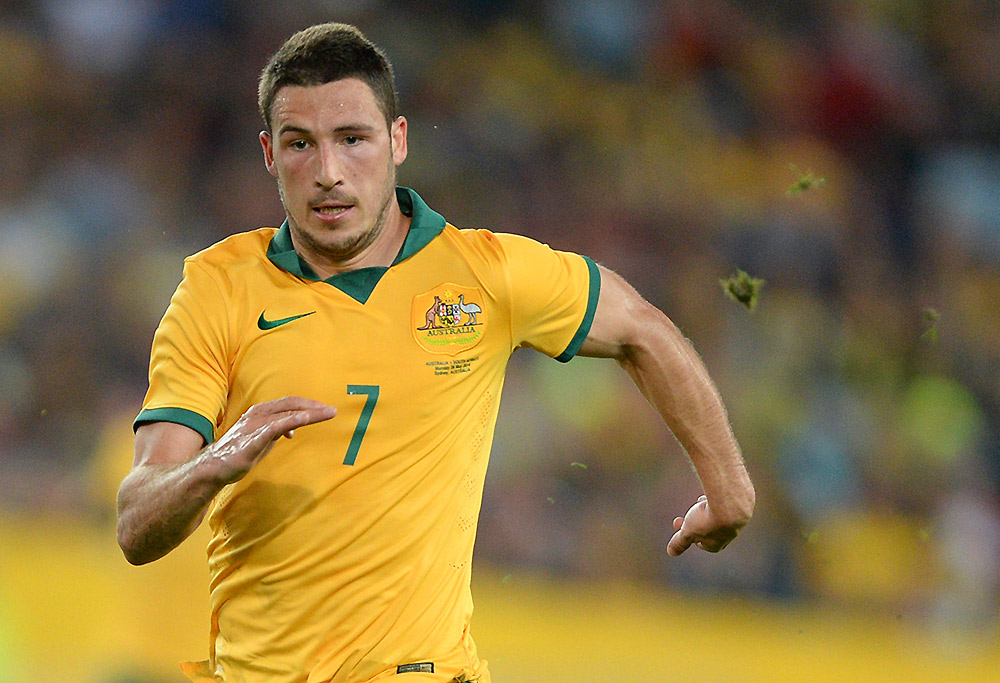 However, the subtext to this data is that we rarely had men inside that penalty box to give the crosser options. In fact, we ranked 20th in the tournament for having the possession in the opponent’s third (only 25% – the bulk of our possession occurred in the middle third which is where van Marwijk set our defensive line).

Too often we created one vs three situations with our squared balls from Leckie, and expected players like Kruse to either beat two defenders or hit first-time shots. Kruse’s inability to convert those shots created often toxic talking points for fans, but in truth, ruthless technical players – like Christian Eriksen or Andre Carrillo – may have converted those.

Was this approach low percentage and therefore worthy of criticism? Possibly. The more direct teams – like quarter-finalists Sweden – and those that press high tend to get at least two players on the shoulders of defenders to pump direct passes to. But adding another forward would have come at the expense of a midfielder, which would have thrown out our defensive posture and ability to win back possession in the centre third.

More likely, our lack of a top-line striker may have dared our opponents to just sit on our best and (central) transition option – Tom Rogic – and force the play out wide to Leckie, who then had few options.

Better cold-hard-hitters of the ball – or a reliable target man who could feed Rogic second balls – may have seen some of these chances taken or enabled higher percentage approach play through the central channel.

In summary, we created numerous shooting chances, and bettered Peru and Denmark in this respect – including from open play and including chances within the 18-yard box. This is not to mention other chances not created – like the Aziz Behich cross that was a metre wide of an unmarked Tim Cahill streaming toward the six-yard box, or the shots that were blocked by our opponents who had more men behind the ball than we had forwards.

So how should this data impact our position grief cycle? Did we really need to create more chances in the last 20 minutes against Denmark, or just hope the plethora of those we did could be converted? If you’re already depressed, then the volume of shots we actually had should make things worse! We actually just didn’t convert opportunities made and possession won.

If you’re in denial about gameplans and tactics, this may support your thesis. Tim Cahill may have got a better look at one of the chances against Denmark – his performance against Peru suggests otherwise but it may help to think that (he had two touches for two shots, neither on target and eight passes for 50% efficiency).

Daniel Arzani put in two crosses against Peru and had nine overall passes at 100 per cent efficiency – but the unknown variable is his fitness base for 90 minutes, given only half a season of professional football in the A-League.

Age, speed, fitness and efficiency all play a role in selections, and clearly Bert saw both Tim and Daniel as impact options off the bench.

Our problem, patently, was that we didn’t get those chances on target as often or as ruthlessly as Peru and Denmark did.

So what can we do for Qatar 2022? It’s obvious – find and plug into the line-up a couple of forwards who can convert! Easier said than done of course.

Perhaps we should check if Fran Karacic has a younger brother.