How do you make it in the world of esports? An interview with one of Australian Overwatch's rising stars

We spoke to Jordy about his career so far, his tips for getting better at whatever game it is your playing, and his hopes for the future.

The Roar: What kind of games did you grow up playing? Had you been much of a competitive gamer before Overwatch?

That’s what makes games fun for me now.

The Roar: Fair enough. What were you first impressions and experiences with Overwatch? Did you take to it straight away, or was there more of a learning curve?

Jordy: When I first saw it I tried really hard to get a closed beta key for it back when it was super early days, and I ended up playing from pretty much the first day of open beta all the way through. I really enjoyed it.

I took a break from it after the first season, played a lot of Counter-Strike, but Counter-Strike changed and I didn’t enjoy it as much. I went back to the game, improved as a player and got quite good at it.

The Roar: What characters do you use mainly, and what drew you to using them? Do they fit your play style? Do you like the character? Do you like the role?
Jordy: I used to play Soldier: 76 for the teams, and when I first came from Counter-Strike back to Overwatch I was like, “Okay, this guy’s pretty similar, just click and shoot.”

I ended up playing what I play now, which is Tracer, Hanzo or Widowmaker, just based on the team I joined and what they needed from me. But I’ve always played DPS really.

The Roar: Are there any characters you play when you’re just mucking around that you don’t use competitively?

Jordy: I feel like the projectile heroes are fun, like Genji and Pharah, but I’m not very good at either of those.

The Roar: Are there any characters you just cannot get the hang of?

Jordy: Yeah, Genji. Nothing I do seems to work.

The Roar: I think that’s good – the fewer Genji mains the better. At what point did you decide to really start taking Overwatch seriously?

Jordy: I started scrimming almost a year and a bit ago now, I started when I ranked in master, I joined a team, so I was scrimming but I still didn’t take it very seriously.

I probably started taking it seriously when I joined skrylla, which was the team before I got picked up for Drop Bears (named 4Legs at the time). I started being like, “alright, maybe I can get good at this game, or good enough.”

The Roar: Do you think there are a lot of options out there available to aspiring esports athletes in Australia?

Jordy: Due to the nature of the region – it’s a smaller region, so the talent pool is quite limited. If there’s a talent, they’ll get on a good team and people will notice them, which is good to an extent.

At the same time, I don’t want to say the scene is stale, but it’s been the same for a long time. The same players are at the top, there’s not much change and not many teams leaving the country.

The Roar: Are there any players, in particular, you looked up to or tried to learn from, Australian or otherwise?
Jordy: I mostly looked up to international players. I was seeing Korean teams at the time when I was learning a lot during Apex, which was the Korean tournament before Overwatch League started.

I learned a lot during that, and now it’s just looking at everyone in Overwatch League cause there’s so many different players with different play styles, you try and figure them and see what will work best for you.

The Roar: Just backtracking a bit, tell us about how you came to join what is now known as Sydney Drop Bears – who approached who?

Jordy: The team I was on before Drop Bears was skrylla. And we, as a new team, blitzed our way through Open Division, which is the step before Contenders.

We beat Masterminds who, at the time were a top four team, and DarkSided – who were also top four.

We really surprised people there with our results, we had very good results and we came through, but we didn’t win. We came second, but 4Legs (now Drop Bears) had a pretty bad run. They finished low in the bracket which was unusual, they were the expected favourites.

After the tournament, I got offered a spot on the Masterminds team, while they were also down a DPS player at 4Legs. They approached me and asked me to join and, based on the players and the level of commitment I knew they had high potential.

They’re better players overall, so I went with them for that reason. 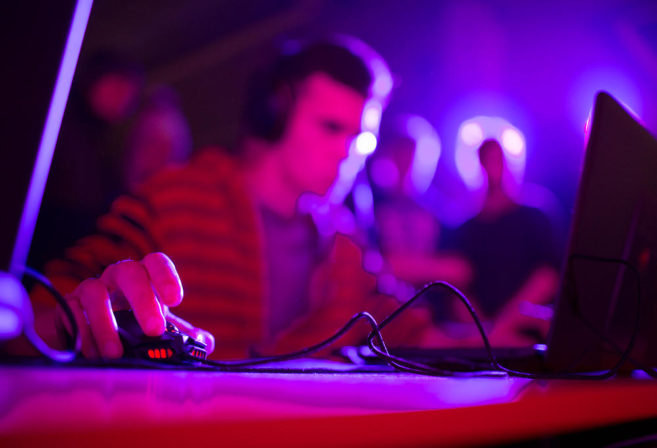 If you think the world of esports is confusing – imagine how the players trying to make it feel. (Andrey Rudakov/Bloomberg)

The Roar: What is your weekly routine look like, as far as Overwatch is concerned? How much has that changed since you’ve joined a team?

Jordy: I used to just play casually. I’d just get home, do competitive, and have fun. Then it kind of changed more into sort of two or three hours of scrims a night. That’s what I did for a while, from 7pm to 10pm.

But now it’s more serious. I’ll do four hours of scrims a night, from 6pm until 10pm. And then some of us else will theory after, while I go and do personal aim training, to improve personally. A lot of people do that. I try and commit six hours a day to Overwatch, which is hard.

The Roar: Aim training, what do you mean by that exactly?
Jordy: Just external programs. There are some games on Steam I play, which is really good for it.

They basically just allow you to continuously shoot at targets and then they reset, and it just helps you get better at aiming.

I do also shoot custom bots. I’ll go into a custom game and shoot Ana bots and Zenyatta bots, with all of their abilities disabled, but I do aim train.

The Roar: What kind of opportunities does Overwatch Contenders offer yourself and a team like Sydney Drop Bears?

Jordy: It’s definitely the best place to get your name out there, but you can’t automatically go anywhere from Contenders without being physically scouted. We could win every Contenders in a row in Australia, but it doesn’t necessarily mean any of us will get into Overwatch League.

The people who own Overwatch League teams employ talent scouts, and they have to decide, “I want to try out this guy”. You have to network your way and go to a trial.

The Roar: Speaking of Australia, there are a lot of rumours that the Overwatch League is looking to add an Australian team in the near future. What do you think that would do for the Australian Overwatch scene?

Jordy: I think, if nothing else, it’ll bring more exposure for our scene personally. Obviously, so many more people watch Overwatch League than they do Contenders, and if they see an Australian team they might pay more attention to the Australian scene overall.

That would be really good. Even if there aren’t Australian players on the team, it’ll still be beneficial for the scene.

The Roar: Lastly, what advice would you have for an Overwatch player out there who’s thinking of going for it?

Jordy: Get your priorities straight, if it’s early days don’t put Overwatch above anything. Just sort of test the waters, see if you can.

But if you think you’re capable of it, you’ve just got to go for it. One of my ex-teammates now does eight hours a day of training for it now. If you think you’ve got the ability to, the natural ability, then you just have to go hard at it.