Seeing red: We need to even the playing field

At most levels of rugby, nobody goes out onto the paddock to be a thug. The sorts of offences that warrant a red card are more often to do with a brain snap or bad timing. Rarely, if ever, is it willful and the offending player is immediately contrite and apologetic.

So what is the red card for? Whatever it is, its real, practical effect is to punish the whole team. Now that’s okay if the team deserves it, say in the case of repeated warnings. But it is grossly unfair in the majority of cases that a team deserves to win or lose by a large margin just because of inequality of numbers.

Naturally, if it is near finals time you take your wins and your points wherever you can get them. But did the Waratahs really deserve to absolutely flog the Sunwolves by that margin? Yes, they played well and used the circumstances and the laws to their advantage, but rugby is a game that depends on fine balances, one of the most important being that 15 men should play 15, except in the most exceptional of circumstances.

Soccer recognises it, as do other sports. Imagine sending off a player in doubles tennis. The game would be over. Ridiculous proposition? Maybe but so is 15 on 14, in my view.

Right now we apply two mantras – get rid of dangerous play and ‘zero tolerance’. Happy with that.

The laws of the game are centred around the referee being the sole judge of law and fact. That has obviously now been ameliorated by the introduction of the assistant referees and more recently the TMO.

While we have to have zero tolerance for blatant foul or dangerous play (and nobody argues with that) we have to take a sensible approach so that the the game is not ruined as an enjoyable experience for players or as a spectacle for its followers.

There’s no fun in having the TMO pull the game up after the ref has let play go on.

All of us can propose solutions, but my view is that the law makers must sit down and do some lateral thinking, but eliminating an uneven contest has to be the centre of their thinking.

There are many situations where a player is not injured and knows he can play on. If the referee blows it up and awards a penalty, no harm done and the offending player can still be cited after the event. That would cause most players to think twice for the rest of the game. If the incident causes an injury naturally it should be reviewed straight away.

If the player knows that his captain has some rights it can be earmarked for later review. 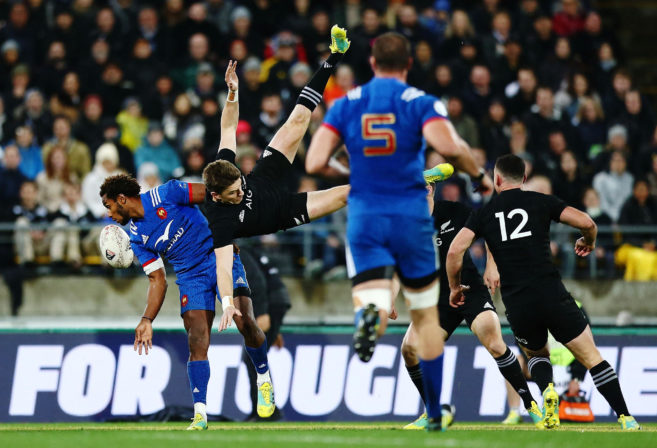 Some possible solutions
A. Introduce another colour, say blue, which amounts to a player warning. Three consecutive blue cards equals an automatic suspension the next week, following the third card, even if those cards are earned over a number of matches. That is logical because it means that you are a serial offender.

B. Red card – player sent off, then after five or ten minutes, a replacement is allowed on (if it was up to me I would allow a replacement on straight away).

C. Yellow – five minutes in the bin. No automatic citing, but TMO can still cite for any offence. Any incident occasioning an injury to be reviewed.

D. Each captain to have the automatic right to ask for a referral to the TMO twice per game.

E. If video is available, both sides are allowed to ask for a post-match review of any incident and be entitled to request a citing.

F. Opposing team to have a right of appeal to the judiciary if it considers a penalty too light.

The object of the exercise would be to penalise a team by losing a player for at least one, if not more matches, but always keeping 15 men on the field. Let the judiciary decide who can or can’t play and let the referees officiate the game with a level playing field in terms of numbers.

We always want our team to win, but not by unfair means. It’s more satisfying to win fair and square than by beating a team that is at a disadvantage.

Imagine being a spectator at a World Cup match where you have paid big bucks to go half way around the world only to see your team eliminated because of lack of numbers when it might otherwise have been close.

Historical note
Let us remember that in the earliest days of rugby, there was no referee. The captains sorted out disputes and if they couldn’t they “referred” the question to someone on the sideline, such as the local vicar or magistrate. Hence the reason that the rugby codes have referees while most other sports have umpires.