It’s around this time every year that the trade rumour mill starts going into overdrive, particularly around the big-name free agents such as Rory Sloane, Tom Lynch, and Jeremy McGovern.

I’ve compiled a list of ‘left field’ trade targets – players who are out of contract at the end of this year who could, and should, be of interest to other teams.

In his third season on North Melbourne’s list, and having played 32 games, Clarke is developing into a first-choice best 22 player.

This season, he is averaging 18 disposals, four marks, and two tackles per game over 11 games. His main strength is his endurance, which stands him in good stead later in games, and allows him to get to contest after contest.

He’s out of contract but hasn’t really been mentioned as a trade target thus far. Several teams would benefit from his running capacity and ball-winning ability, particularly Carlton and Essendon.

Clubs he’d suit
Anyone looking for endurance runners to complement their game style. Adelaide has Sam Gibson for the moment, but could be a valuable mentor to Clarke in the coming years, and he’d certainly help out Patrick Cripps at Carlton.

Laverde has been limited to only six games this year due to injury and lack of form. It’s his fourth year on the Bombers’ list, and he’s yet to play more than nine games in a season, having been plagued by injuries during his time at the club.

He’s shown clear glimpses of his talent – he was drafted as an explosive, big-bodied midfielder, which is currently Essendon’s main deficiency. However, his lack of durability makes it hard to assess his value.

I’d be surprised if the Bombers didn’t look to give him a one-year extension in the hopes he can get his body right because, at his best, he’s talented enough to make an impact in every midfield in the competition.

Clubs he’d suit
Laverde has star factor, so teams like Carlton and St Kilda, who are really looking for that, would likely find him appealing.

He’s now played 103 games and looks to be entering the prime of his career, however Hall’s lack of defensive accountability has seen him dropped to the NEAFL several times this year.

At his best, he’s a creative, versatile player who amasses the ball in the midfield – in his two best seasons in 2016 and 2017, when he really established himself in the competition, he averaged around 26 disposals per game, over 17 and 19 games respectively. He’s only played six games this year though, and appears to be on the outer with new coach Stuart Dew.

A new start at another club, where he’d be given the freedom to play to his strengths, but where he can also focusing on working on his defensive efforts, could bring out the best in him.

Given the Suns’ midfield woes, they will be reticent to let him go for lower than a second-round pick, but may not have a choice given he’s been on the outer this year.

Clubs he’d suit
Really depends whether clubs think his ball-winning abilities outweigh his lack of defensive play. He’d suit anyone looking for a ball-winning midfielder, so Carlton, Essendon, and St Kilda are likely in the mix here. He’d also work well at Hawthorn, adding a bit of spark and versatility to a solid midfield with Jaeger O’Meara and Tom Mitchell. 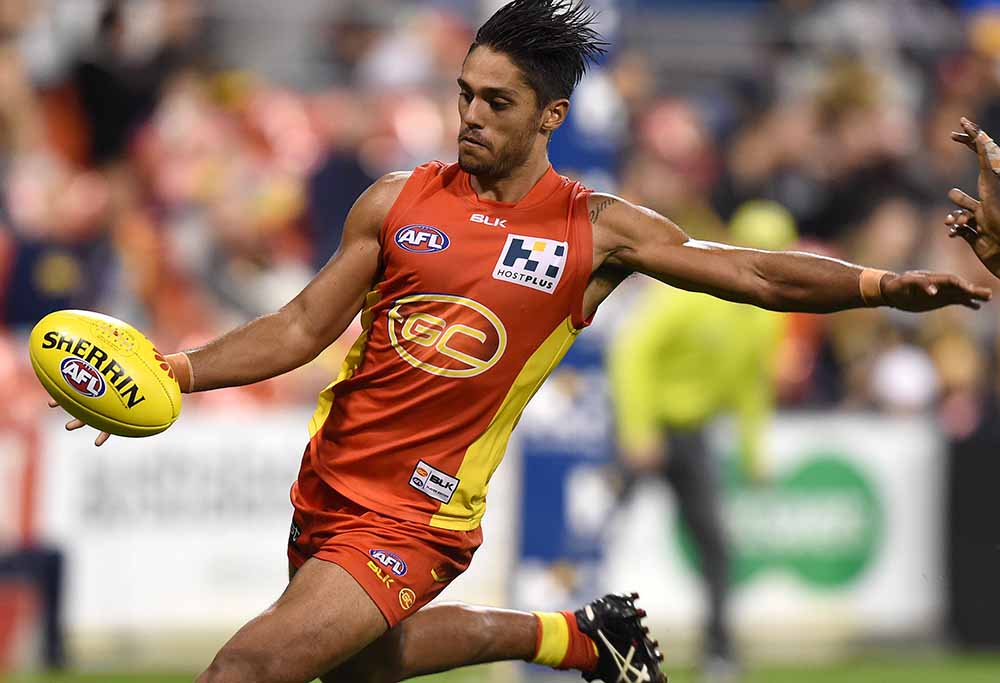 Key defender Collins finds himself in an interesting position contract-wise, given the Bulldogs drafted Aaron Naughton at the end of last year, brought versatile tall Jackson Trengove across from Port Adelaide, and also have Fletcher Roberts, Marcus Adams, Zaine Cordy, and Easton Wood in similar roles.

He’s in his third year on the list, but has played only the one game, way back in 2016. In his draft year, Collins was rated one of the best one-on-one key defenders in the pool, and could thrive given an opportunity at another club.

He’s been on the outer at Melbourne for the last few years, but he’s speedy and skillful. He needs to kick more goals for someone in his role (he’s averaged only 0.4 per match over his career), but he could benefit a team looking for someone with game sense and speed up forward.

Having observed him play many times during his TAC Cup season with Oakleigh, in 2013, he was consistently the smartest player on the ground, and his ability to read the play and create space was second-to-none.

Clubs he’d suit
Carlton, Collingwood, Fremantle, GWS, and Saints all lack skilful small forwards who can also play on a wing, and he’d add some nice depth in this area.

The jungle drums have been beating around Scrimshaw wanting to move back to his home state of Victoria. He’s yet to re-sign with the Gold Coast, and is yet to play a game this year (although that’s partly due to injury issues).

He played four games last year, and showed promising signs – as a taller wingman, he’s going to take time to develop, and so may be a project player for a club for the next few years.

However, he was taken at pick seven in the 2016 draft, and was one of the most talented players in his draft year, so there is definite upside. Given he’s only played four games, he’d likely come cheap, too.

Clubs he’d suit
Carlton, Essendon, North, Saints, Hawthorn, and Richmond could use a bigger-bodied, versatile player. The latter two, in particular, could allow him time to develop over the next few years.

Lovell was drafted with a view to replacing Sam Mitchell in the Hawks’ midfield. The small, tough midfielder has been in good form in the VFL, however he can’t seem to hold down a spot in the AFL team. His two AFL games came way back in 2016, making his future at Hawthorn uncertain.

He was the Hawks’ first-round draft pick in 2015, but would likely come cheap, given his lack of games. He would suit a team looking to bolster its midfield – like Mitchell, he’s small, at 174cm, but also has fantastic game sense, and is an excellent decision-maker. After three years in the VFL, he’s ready to come straight into a senior side, and could have a big impact next year.

Clubs he’d suit
Adelaide, Carlton, Essendon, Gold Coast, Melbourne, and Richmond could all use a tough, smaller midfielder. Melbourne, in particular, would benefit from his defensive edge.

Partington is another player who was taken in the 2015 draft who’s been unable to crack the senior side. He’s played six games, all of them coming at the back end of last year, including the elimination final against Port Adelaide. He’s a solid, skilful midfielder, and, while still finding his feet at AFL level, would likely be a reliable ball winner in most teams – he’s currently averaging 27 disposals per game in the WAFL this year.

My sense is that the Eagles rate him, and would be loathe to part with him, but would likely do so if it means him having more opportunity elsewhere.

Clubs he’d suit
He’s originally from South Australia, so Adelaide and Port should both look at him. Outside of that, most clubs looking to improve their midfields should be interested.