Pieces of eight: Why New Zealand still rules the high seas of rugby

The flag which flutters highest on the masthead of world rugby is still all black in colour. It does not have a skull-and-crossbones on it, but when it hoves into view everyone knows its meaning.

For an opponent, this particular ‘Jolly Roger’ is a threat to life and limb.

While the reasons behind New Zealand’s extraordinary run of success since 2004 have the been the topic of many books and studies, on the field it boils down to a single core reality – the breadth and excellence of individual skill-sets, and their consistent application under pressure.

Both become ever clearer as the spotlight moves away from the backs and on to the ‘low numbers’ on the field: the forwards from one to eight.

Footballing ability up front is what distinguishes New Zealand from everyone else. Some Northern Hemisphere nations (like Wales and Scotland) are trying as a matter of policy to close that gap – and they are succeeding, but even they will admit that it is a work in progress.

England and Ireland are producing some atypical tight forwards who can run, pass and handle, like Mako Vunipola and Tadhg Furlong, but they remain the exception rather than the rule.

The demand for high-tempo, high-quality footballing skills in the tight five provided a sharp wake-up call for France on their recent tour of the Shaky Isles. Jacques Brunel was even forced to recast a player who plays all his club football at number 7 (Bernard le Roux) as an emergency second row during the June series. The French lineout throw promptly collapsed and undermined the effort of the team everywhere else.

While you could probably stitch together a tight five out of the three major tours which has All Black type footballing credentials – Vunipola and Furlong propping Camille Chat in the front row, with James Ryan and Joe Launchbury seconding them – there are not too many candidates clamouring for inclusion outside those players.

Saturday’s rousing Super Rugby encounter between the Crusaders and the Highlanders concentrated the evidence in the construction of Crusaders’ try at the end of the first period (2:40 on the reel):

Loose-head prop Wyatt Crockett – christening the birth of the new stadium name at Christchurch with an appropriate piece of skill – openside Matt Todd and hooker Andrew Makalio all delivered perfect offloads under pressure for second row Scott Barrett to convert the try. It was a score fashioned and finished exclusively by forwards, after the initial breach was made by Richie Mo’unga.

The same contrast in philosophies applies to the critical number eight position. Players with heavy-duty power in contact, like England’s Billy Vunipola and Ireland’s CJ Stander, tend to get selected in that spot in Europe and South Africa. Their capacity to handle and pass will probably not be developed significantly unless it is a specific priority for their clubs.

It is different in New Zealand, where the No.8 increasingly enjoys a creative play-making role. In one form or another, all of Gareth Evans (for the Hurricanes), Liam Messam (Chiefs), Luke Whitelock (Highlanders) and Kieran Read (Crusaders) can use the ball and unlock spaces for others to exploit.

The captain of the All Black ship is Read, who has been hors de combat for the whole of 2018. His contest with Luke Whitelock – the man who replaced him for the France series – promised to be a battle royale, and so it proved to be for the 47 minutes Read was on the field.

In a creative sense, Read never missed beat, making a crucial contribution to the Crusaders’ opening try of the game (0:25 on the reel):

Mo’unga was at first receiver, with an attacking triangle of Read, prop Joe Moody and number 12 Ryan Crotty outside him: 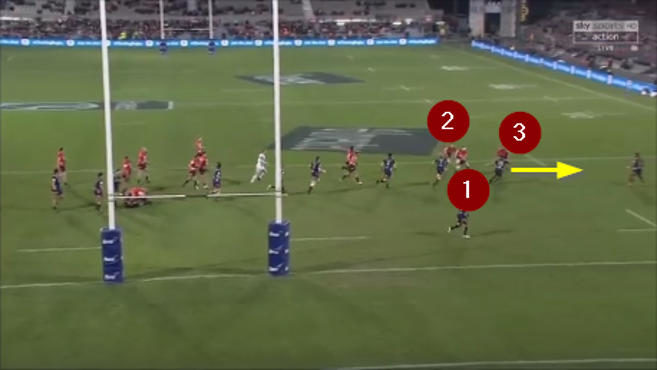 Typically the ‘1’ spot would be manned by a second attacking play-maker, like Kurtley Beale for the Wallabies, who makes the decision whether to run himself, pass flat to the forward (‘3’ Moody) or drop the ball in behind to the back (‘2’ Crotty) for the play to move wider.

The Crusaders rely on Read, a forward, to make this decision. He saw that Rob Thompson had begun to drift on to the threat of Crotty and coaxed Moody through the line on the short ball instead. The try was scored on the next phase. It was a simple but beautiful play.

Had he wished to, Read could have played international rugby as a back. The second example demonstrates the finesse and linking ability of a halfback from scrum:

The Crusaders wanted to draw one of the key Highlander defenders (#9 Aaron Smith) away from the side of the field they wanted to attack. They achieved their aim by running their own scrum-half, Bryn Hall, away to the right, but also via a subtle sequence of false ‘tells’ in Read’s foot positioning: 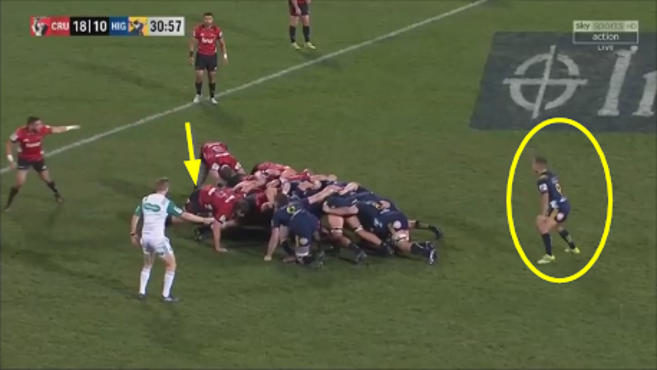 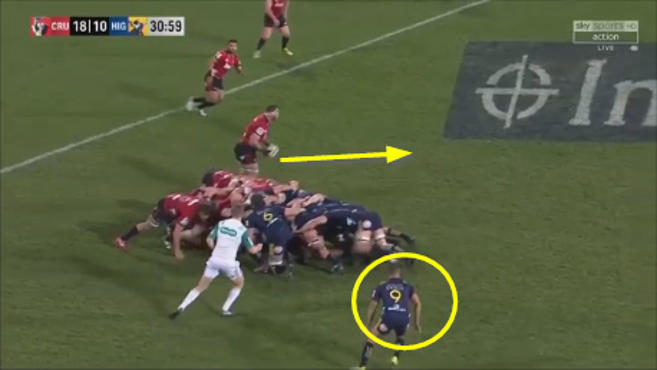 In the first shot, Read was performing a classic scrum-half trick. He cleared his feet to the left, making as if he was going to pass in the opposite direction. As soon as Smith swallowed the bait, he changed feet and moved off the other way.

Needless to say, the pass to Mo’unga was perfectly-timed.

For many years, the All Blacks have employed Read as one of their main creative influences in the wide channels, linking with the back three as the penultimate passer to create overlaps:

Here Read made a neat all-in-one transfer to George Bridge to give some space on the outside (another recent example occurred in the first game of the 2017 Rugby Championship). The role was as far removed from the traditional power game of a typical European or South African number eight as it’s possible to imagine!

Just like a good modern back, Read also sees his potential running line ahead of time:

Luke Whitelock had to work hard on his ball-handling skills in order to attain the standard that the national selectors require. Characteristically, he plays a little closer to the breakdown for the Highlanders than Read does for the Crusaders.

Whitelock was instrumental in punching through the gap off 9 and delivering the money pass for prop Tyrell Lomax to score the Highlanders’ opening try of the game (1:20 on the reel): 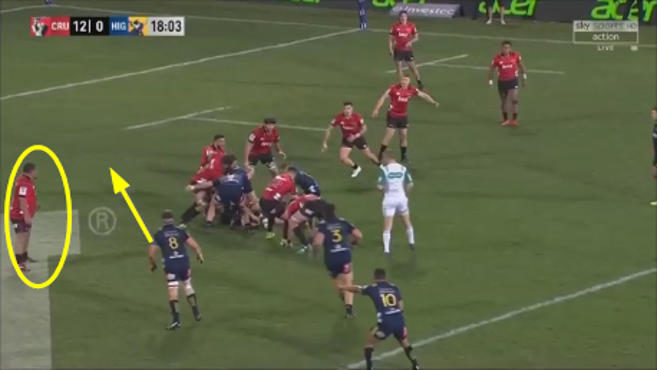 With Makalio isolated (and ball-watching) in acres of space close to the breakdown, Whitelock saw and picked the right running line early.

His ability to link and deliver a positive offload in contact was a feature throughout:

If Tom Franklin took that final no-look ball, he would have been clean through on to the last Crusaders’ defender: 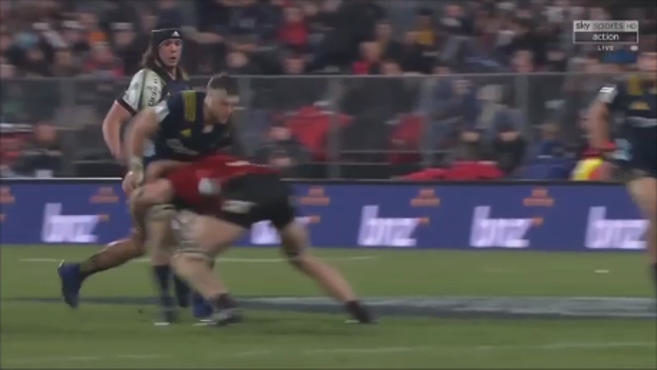 Summary
The All Black flag is still fluttering at the top of the world game because the Kiwis demand more, in terms of skills, from every position on the field. Nowhere is this more evident than in their tight forwards, and in the shifting selection tendencies at number eight.

As a group, Kiwi tight forwards still handle and pass better than any of their counterparts.

At number eight, the preference in South Africa and in Europe has always been for ball-carrying power in traffic. Relatively recently there has been some experimentation – witness Kevin Gourdon with France, Sam Simmonds with England, Ryan Wilson with Scotland and Sean McMahon or the ‘Pooper’ in Australia – but none are as advanced in their understanding of the possibilities as New Zealand.

Luke Whitelock has always been a solid, hard-working forward, but has been asked to graft more ball-playing ability on to his game in order to achieve All Black status.

He may have to accept a back-up role now that the king has returned. Kieran Read played just over three-quarters of an hour for the Crusaders last Saturday, but it looked as if he had never been away.

Read is the perfect example of real value added to the core requirements of his position. His power in contact is adequate, rather than earth-shattering, but his point of difference lies in his creative ability with the ball in hand, which is unmatched.

Read can fulfil the role of second playmaker in midfield, can run and handle in the wide channels with the outside backs, has the instincts of a back picking his running lines, and uses finesse to offset opponents.

While the Northern Hemisphere can rightly claim to have caught up, and even surpassed New Zealand in areas like kicking and defence, the Tortuga of superior skill-sets and more refined positional demands still holds sway.

Until that final citadel can be successfully besieged, those All Black buccaneers will continue to rule the high seas.