The 15th of September 2011 was a massive day in the history of the Fremantle Football Club. Indeed it was one of the most important days in their history: it marked the start of a new era.

A change of guernsey and logo was only the start. Then coach Mark Harvey, who had led Fremantle to the semi-finals in 2010 before enduring a disastrous 2011 season, when injuries hit the side so hard that the Dockers had to ask the AFL for special permission to play rookies, was cast aside in the most brutal of circumstances.

Just that morning Harvey had been talking about the upcoming season at a breakfast. By the afternoon he was gone.

Only two hours later the reason became apparent: Ross Lyon had left St Kilda, who he had led to three grand finals, and was set to become the new coach of the Fremantle Dockers.

As a lifelong fan and member of the Fremantle Dockers, I was excited about the move. Yes it had been harsh on Harvey, but we were finally getting a coach who I believed could take us all the way – finally a coach who would mean the Dockers would be taken seriously.

And for a glorious few years it was indeed a match made in heaven. Freo really was the perfect fit for the aptly named ‘Ross the Boss’. It was a side about to hit the peak of its powers with perhaps three of Fremantle’s greatest ever players – Matthew Pavlich, Luke McPharlin and Aaron Sandilands – coming towards the end of their careers and hungry for success. 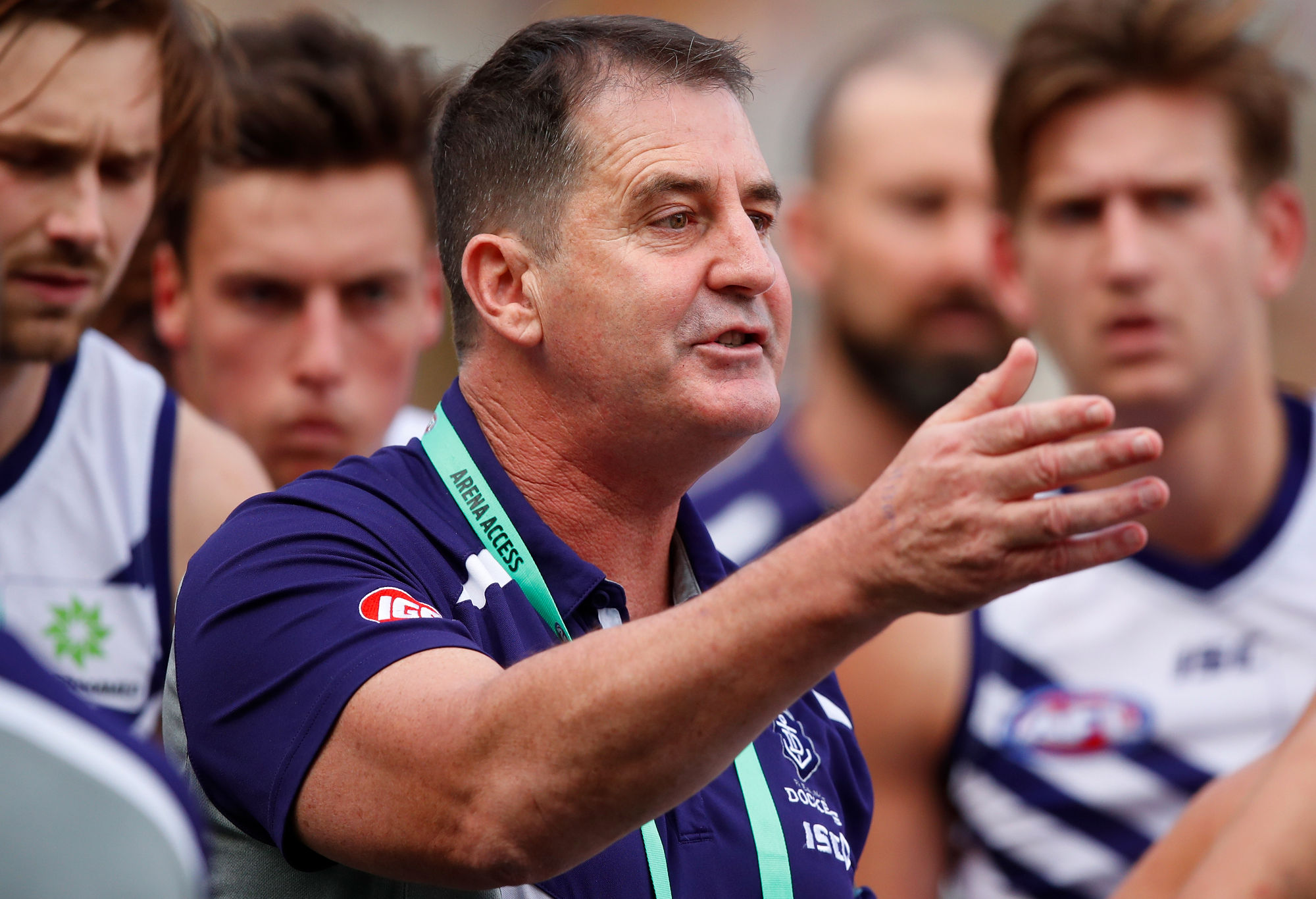 In 2012, Lyon’s first season in charge, Fremantle made the semi-finals, beating reigning premiers Geelong in an elimination final in Melbourne, proving themselves as a potential future power of the competition.

By 2013 they were one of the best sides in the league, making it all the way to the grand final. It was a glorious time. The Cappuccino Strip turned purple, and as a 17-year-old in the middle of year 12 exams I still made my way to the MCG to watch Fremantle hopefully make history under Ross the Boss.

It wasn’t to be. Hawthorn were at the absolute peak of their powers as the best team of the modern era – but we ran them close, and perhaps if we’d been accurate, who knows? Lyon may well have had that elusive premiership.

However, hope springs eternal, and I felt that the next two years would be our big chance, finally winning a premiership for our champion Pav.

The 2014 and 2015 seasons were two of the most frustrating years I can remember. With so much expectation we played really well throughout the season only to crumble in the finals. Fremantle went out in straight sets in 2014 and lost a preliminary final to Hawthorn at home in 2015, robbing Western Australia fans from the ultimate: a derby grand final.

However, in 2015, despite finishing on top of the ladder, the cracks started to show. Rarely did we actually kill a team off; rather we’d grind them down with our dour defence and hope we could score more than they did. It worked thanks to the superstar that was a 33-year-old Pavlich, still the lone man up front, and McPharlin, still the rock in defence. Our midfield was superb with Brownlow medallist Nat Fyfe leading the charge, but at either end we started to look vulnerable. 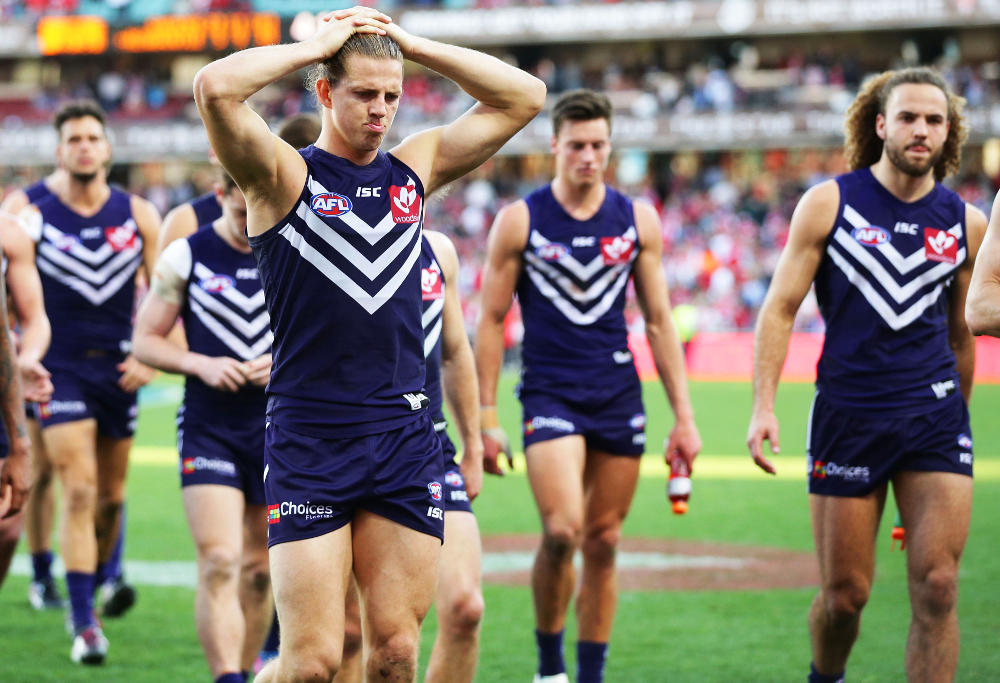 With the retirement of McPharlin and Pavlich, with Sandilands another year older and with younger teams finally working out how to break Fremantle down, 2016 shouldn’t have come as much of a shock as it did. Lyon showed in that season that we had no plan B, no way to cope with teams that moved the ball at pace and had multiple attacking options. The Bulldogs won the premiership on the back of fast ball movement while Freo were still stuck in the Paul Roos 2005 method of trying to grind teams down.

The reality was that Freo were past it, the window had shut – but Lyon didn’t want to accept that fact.

Rather than choosing to undertake a full rebuild at the start of 2017, Lyon chose a ‘re-stump, re-wire, re-plumb’ strategy, which backfired spectacularly and set Fremantle 12 to 18 months behind where they currently should be.

Zac Dawson, Nick Suban, Danyle Pearce and Hayden Ballantyne are all players who should have been moved on after the 2016 season but were kept because Lyon’s ego was too big to attempt a full-scale rebuild. The latter players are still strangely on the list even now, when it is clear they will have no part in any future premiership tilt for Fremantle.

At the start of the 2016 season Lyon signed a lucrative five-year contract extension that tied him to the club until 2020, a decision I believe has backfired spectacularly on the club.

The reason is that Lyon can’t rebuild, he has never done it before. At St Kilda he inherited a side built by Grant Thomas and at Fremantle it was a side built by Chris Connolly and Mark Harvey. He’s never had to start from scratch like he has to now with this Dokcers side, and I don’t believe he has it in him to do so. 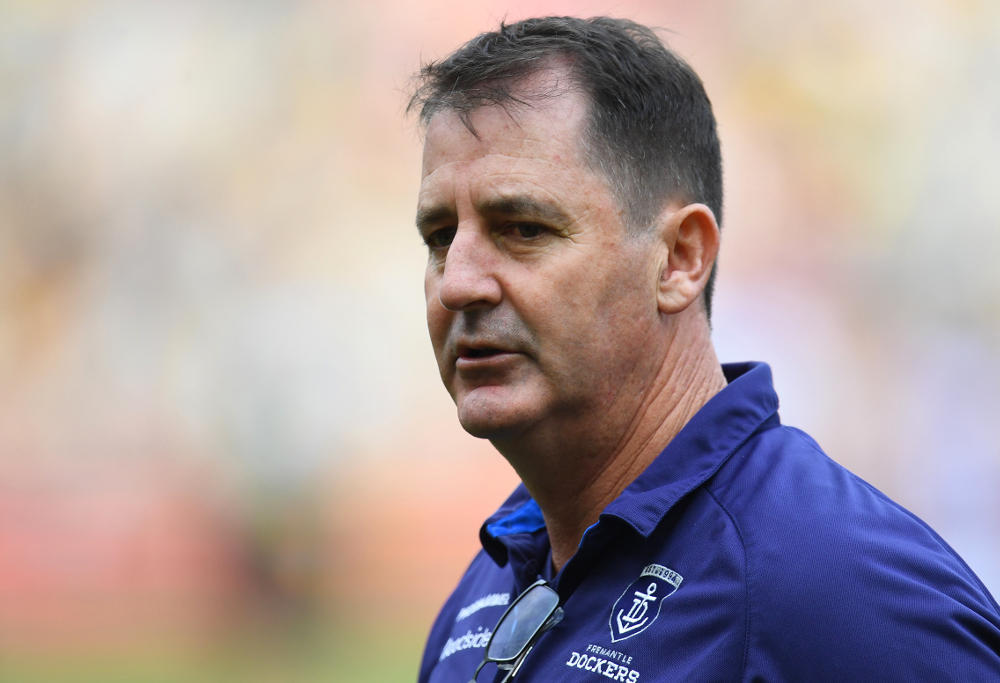 He doesn’t fill me with any confidence with the sides he picks, and up until this season he hasn’t given many young players consistent football. Even this season the likes of Hayden Ballantyne and Danyle Pearce have been getting regular football even though they have proven time and time again they are no longer up to AFL standard. It’s almost as if he doesn’t trust the young players to do the job.

Lyon’s game plan seems not to have evolved even though football is completely different to how it was five years ago when Freo were in a grand final. On multiple occasions on Saturday night every single Freo player was behind the ball, and when a player received the ball in the midfield he had no-one ahead to kick to so had to go backwards or sideways. The ball movement is slow and frustrating to watch.

It’s almost as if Lyon coaches any attacking flair out of the players. Stephen Hill seems a shadow of the player he was in his early years, and the elite foot skills his brother Brad had at Hawthorn have all of a sudden disappeared. Even new recruit Nathan Wilson, considered one of the best ball-users off half back, is now constantly butchering the ball.

These are all symptoms of Lyon’s outdated gameplan which seems to be so ingrained into these players that any natural attacking flair has been lost or is forbidden from being used.

The system which was once so effective seems to be lost on these players, and with the AFL continually updating the rules to encourage a more free-flowing and open play, it will only get harder and harder for Freo to compete with their current style. 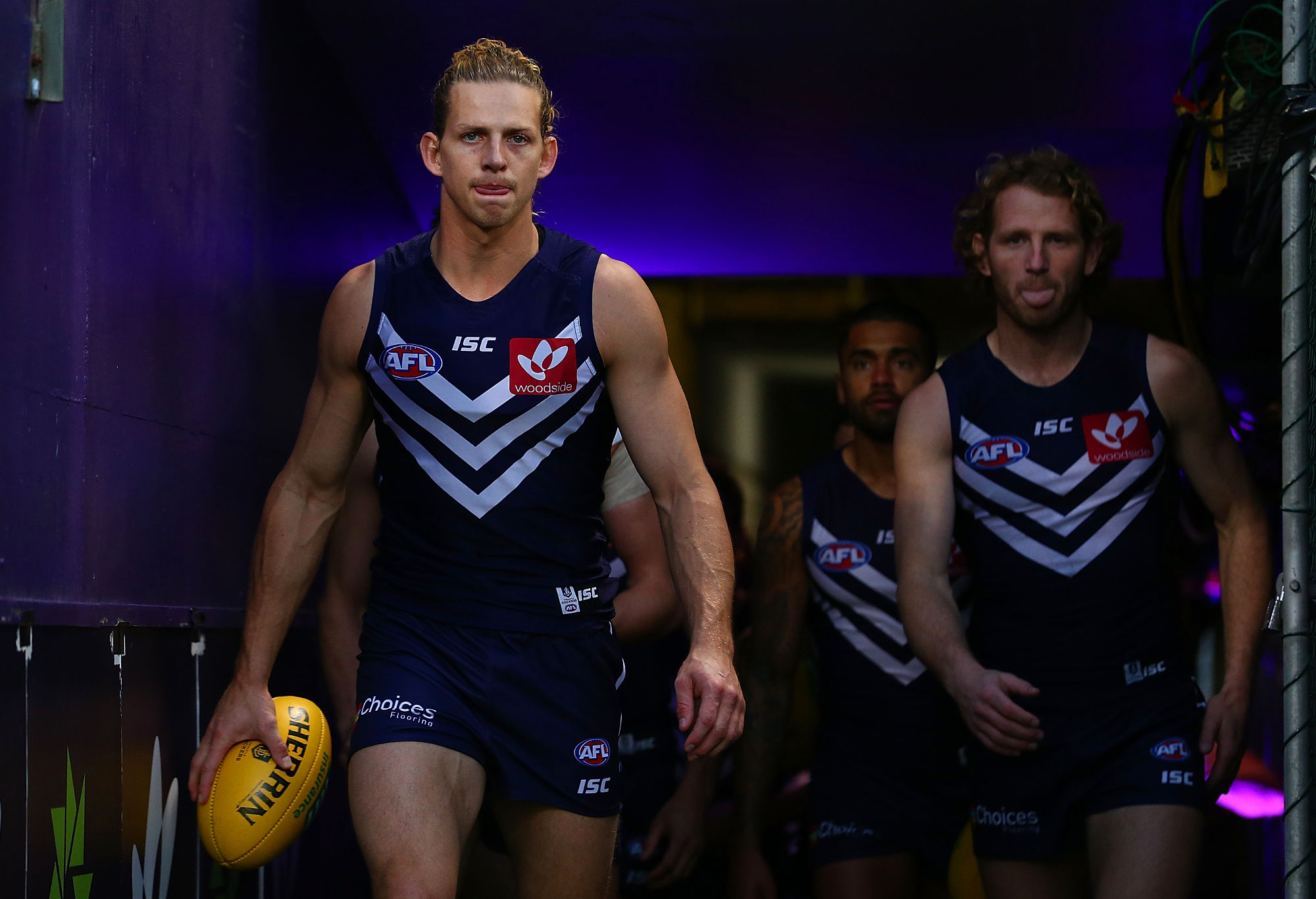 It all makes you question whether Lyon is the right man to be coaching the team. I am certainly not the only Fremantle fan that feels this way – in fact most Fremantle fans I talk to agree that Lyon is not the man to lead Fremantle forward.

Why, then, is he not under more pressure? Brendon Bolton, who in my opinion is doing a better rebuilding job than Lyon is, is under huge pressure to keep his job at Carlton, while Alan Richardson’s job seems to be as good as gone at St Kilda.

What happened to holding the coach accountable for poor performances?

When Lyon signed on in 2016 he said, “We’re certainly aiming for a premiership and you don’t shy away from that. Particularly by the end of this tenure, I’ll have no excuse to not have achieved that because we’re fully resourced, fully supported and I’ve certainly got a timeframe where I can make short-term and long-term decisions to get us where we want to be.”

Two and a half years into his contract Fremantle look further away from a premiership than ever, and he needs to be held accountable for what he said when he signed on. He was going to lead Freo to the promised land by 2020 – but even the most optimistic Freo fan will tell you that’s a pipe dream now.

So who should replace him?

Peter Sumich is a name that keeps coming up in conversation, and for good reason. He knows the players well, has experience both at Fremantle and at West Coast and has been coaching Western Australia under-18s for the last two years, showing he has the ability to work well with young and developing players. It would also be the ultimate irony if Suma took over Lyon.

Jarrad Schofield is another who would certainly be a good fit. He’s a two-time WAFL premiership-winning coach and probably would be a four-time winning coach if it wasn’t for the Dockers alignment with Peel. Subi are currently so far ahead on the WAFL ladder this season that they would probably challenge the likes of Carlton and Gold Coast if they played them.

However, the dream choice would be Brett Kirk. The former Swans superstar was an integral part of Fremantle’s coaching staff in 2013, and Nat Fyfe actually credited Kirk as playing an integral part in his career development when he won the Brownlow. As much as I’d love to see it happen, he is Sydney royalty, so I would not be surprised if he eventually replaces Longmire.

All of this is moot if Fremantle don’t get rid of the current problem that is Ross Lyon. The board continues to back him to the hilt despite Fremantle’s poor showings, though I really don’t the reason for it other than his long-term contract.

There is quality in this list, I truly believe that, but it needs a fresh perspective to once again turn that potential into performances. I don’t think Lyon can change, and it’s time to cut him loose, despite the financial hit.