World Cup team of the tournament: The best XI from Russia 2018

That, we can all agree, was the best World Cup for quite some time. Possibly ever. And such a wonderful tournament needs a best XI to match.

The cliched way to introduce a team of the tournament is to start with something along the lines of ‘picking 11 players was incredibly difficult’, but this task was made relatively easy thanks to the stand-out performances of a number of stars. It’s not like N’Golo Kante, Luka Modric and Kylian Mbappe weren’t going to make this side.

A quick note on the formation; I’ve gone with a 4-5-1 (or a 4-2-3-1, whatever you want to call it). It was one of the most frequently used structures in Russia 2018, and employed effectively by both finalists. Plenty of sides played with three at the back and two wing-backs, but given how popular that set-up is in Australia, we’ll stick with a more traditional back four.

If you think I’ve made like Jorge Sampaoli and completely bungled this team selection, fear not – you’ll get to select your own in the form at the bottom of this article. (Update: Well, you can’t now. We’ll have The Crowd’s World Cup team of the tournament up shortly).

With all that out of the way, let’s get to it, starting with the man between the sticks.

Goalkeeper: Jordan Pickford (England)
Well, it wasn’t going to be Hugo Lloris, was it?

Without Pickford, England don’t make it past Colombia. His stunning last-minute save and crucial stop in the ensuing penalty shootout pushed the Three Lions into the quarter-finals, where he delivered once again with a trio of sharp saves.

It was an outstanding month from the Everton stopper, particularly considering he wasn’t necessarily the consensus no.1 coming into the tournament. Big clubs are sure to come calling for his services; rumour has it a certain cross-town rival is in the market for a keeper.

Right back: Kieran Trippier (England)
Another Englishman, another breakout tournament. Trippier was in fine form all tournament for Gareth Southgate’s side, offering plenty of go-forward as one of England’s two wing-backs. His reputation as a true dead-ball specialist was only enhanced by his consistent delivery all tournament, capped off by that stunning free-kick in the semi-final against Croatia.

Varane’s aerial prowess is right up there with the best in his position, but it’s his pace – such a rarity at the centre of defence – which really sets him apart.

Centre back: Andreas Granqvist (Sweden)
Sweden were an organised, disciplined and compact unit all tournament, much of which was down to their skipper. Granqvist was superb in marshalling a defence which only conceded in two games – against Germany and England – and was ice-cold from the penalty spot on two occasions. Plus, he missed the birth of his second kid so he could face England. That kind of commitment deserves recognition.

Left back: Lucas Hernandez (France)
The petty Australian fan in me really didn’t want to put Hernandez in here after he spent most of France’s first game against the Socceroos rolling around on the floor. Alas, the Frenchman was the standout left back of the tournament, performing reliably in both defence and attack. His two assists for the World Cup are proof of his impact going forward.

Central midfielder: Paul Pogba (France)
Pogba is part of an all-French central midfield pairing thanks to an imposing tournament. Much maligned for his play with Manchester United this past Premier League season, Pogba was back to his best for Les Blues in Russia, bossing the midfield with Kante and offering plenty on attack. A World Cup final goal was just reward for his superb Russia 2018 performance. 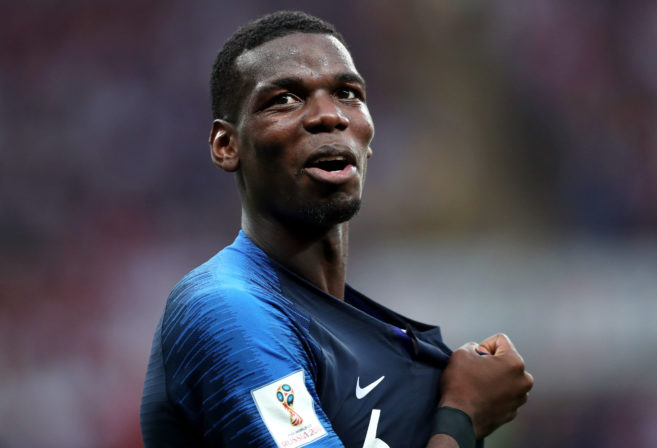 Central midfielder: N’Golo Kante (France)
Luka Modric might have taken home the Golden Ball, but I’d have had no issues with Kante picking up the award. The diminutive Frenchman was a model of consistency in Russia getting his side to the final, defusing opposition attacks and starting breaks throughout.

His performance in the decider was probably his worst of the tournament, but he still proved he’s undoubtedly the best player in his position in world football today.

Right winger: Kylian Mbappe (France)
The fifth and final Frenchman of the XI, the 19-year-old’s place here was never in doubt – hardly a surprise given Pele was the only player anyone could use as an accurate comparison for Mbappe. The winger became the first teenager since the Brazilian legend to both score multiple goals in a World Cup game and find the back of the net in a final.

With Lionel Messi and Cristiano Ronaldo failing to lead their teams past the Round of 16, and Neymar too busy rolling around on the ground to worry about playing good football, Mbappe used this tournament to establish himself as the sport’s next superstar. Imagine how good he’s going to be in four years’ time. 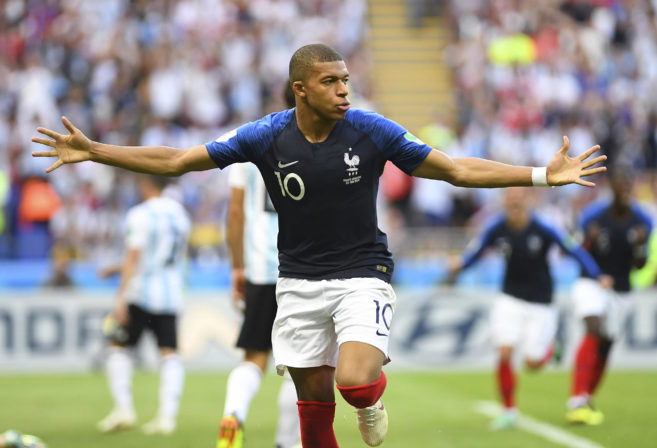 Attacking midfielder: Luka Modric (Croatia)
A much-deserving Golden Ball winner, Modric proved he’s the best midfielder going around today. Playing a more attacking role than Real Madrid fans are used to seeing, Croatia’s captain guided them to the final with a couple of goals – including a swerving, long-range screamer against Argentina – a couple more clutch shootout penalties, and an assist.

With this year’s Champions League medal already hanging in his cabinet, the Golden Ball and runners-up medal from Russia should put Modric right in Ballon d’Or contention.

Left winger: Ivan Perisic (Croatia)
Perisic had a fine World Cup, scoring a belter in the final after putting in a man-of-the-match shift against England to ensure Croatia made it all the way to the decider. Hell, there were doubts he’d even play against France after picking up a thigh complaint in the win over the Three Lions.

With Mario Mandzukic clearly hobbled in the semi-final and final, Perisic provided the Vatreni with attacking go-forward by playing a free-running role up front. Three goals and an assist for the tournament is a fine return from a wide player

Striker: Romelu Lukaku (Belgium)
After a tournament so full of goals, it’s a little surprising no striker really stood out. Harry Kane’s Golden Ball win was thanks to lots of penalties, a couple of set-piece headers and an errant heel, Olivier Giroud contributed great work-rate and not much else, and Mario Mandzukic wasn’t particularly impactful.

So it’s Lukaku who, despite finishing with two lacklustre performances gets the nod here. At the end of the quarter-finals, the big Belgian was a genuine contender for player of the tournament, his movement up front proving crucial in the Red Devils’ wins over Japan and Brazil. He’ll be kicking himself for two shocking touches in the third-place playoff which cost him the Golden Boot. 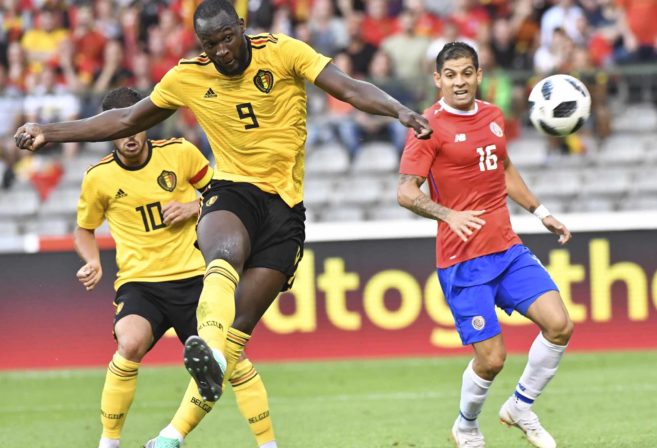 Goalkeeper – Thibaut Courtois (Belgium): The Golden Glove winner was excellent for Belgium. A toss-up between him and Pickford for best keeper.

Defender – Diego Godin (Uruguay): Uruguay’s defence was rock-solid, and that was largely thanks to their skipper.

Defender – Sime Vrsaljko (Croatia): Was tireless working up and down Croatia’s right flank in both attack and defence.

Midfielder – Philippe Coutinho (Brazil): Coutinho was head-and-shoulders above his Brazilian teammates, finishing the tournament with a brace of both goals and assists. 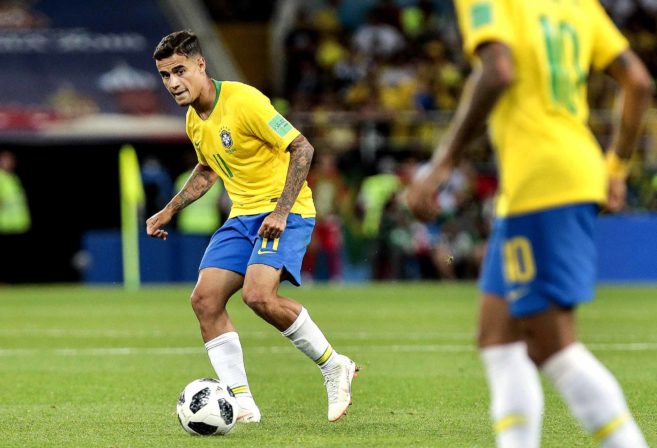 Striker – Edinson Cavani (Uruguay): You can tell how good a player is when he’s missing. After scoring a sensational brace against Portugal, Uruguay’s World Cup chances went down the toilet when Cavani injured his calf.