Now it's Qatar's time to shine – if they're given the chance

The final ball hadn’t even been kicked in Russia before some – mostly European media – started to get themselves into a lather over the fact Qatar will be the next host of the FIFA World Cup.

Of course, this isn’t news, it’s been known for the better part of eight years.

It’s been hilarious to see so many people up in arms over the first ‘winter’ World Cup. Of course, that would be northern hemisphere winter, but such claims say much about how those spruiking view football. For them, it’s only the European game.

One point disgraced former FIFA President Sepp Blatter made after the awarding of the World Cup to Qatar, one that I happen to agree with, was that football is the world game and every corner of the globe should be able to bid for and host its most prestigious tournament. Is it fair that an entire region of the planet be excluded because history says it has to be played in a prescribed two-month period?

The world is changing, and football needs to change with it. If that means having to move one or two seasons of football, then so be it.

Dozens of leagues across the world already break for the World Cup every four years (and you never hear those leagues complain about the interruption to their leagues every four years) and many in Europe already have winter breaks.

Ironically enough, Qatar’s season is one that will be affected by the change in dates, as will a lot of other leagues across Asia, mostly in the Middle East.

There are a number of legitimate issues surrounding Qatar and its hosting of the World Cup, and they are worthy of the intense scrutiny they have received, which has already led to significant reforms of the labour system. More improvements are still needed, but without football’s focus, these recent changes wouldn’t have been made. This is one global sporting event that may actually leave a lasting legacy.

Interestingly though, Russia had many similar issues that weren’t given the same intense scrutiny. Many still don’t know of claims the stadiums in Russia were built using slave labour from around the world.

When you add in other human rights issues, the treatment of black athletes, the treatment of LGBTIQ people, their annexation of Crimea, and the shooting down of MH17 – not to mention the way they were awarded the hosting in the same dubious process as Qatar – there were no shortage of issues with Russia earning hosting rights.

Many of these received widespread attention, but not to the same scale we’ve seen with Qatar.

Are Russia seen as a more palatable host? Is it simply a matter of geography and the fact Russia (well, half of it anyway) is in Europe, rather than the Middle East?

Whatever it is, people accepted Russia as a host, many of whom now refuse to accept Qatar as host. 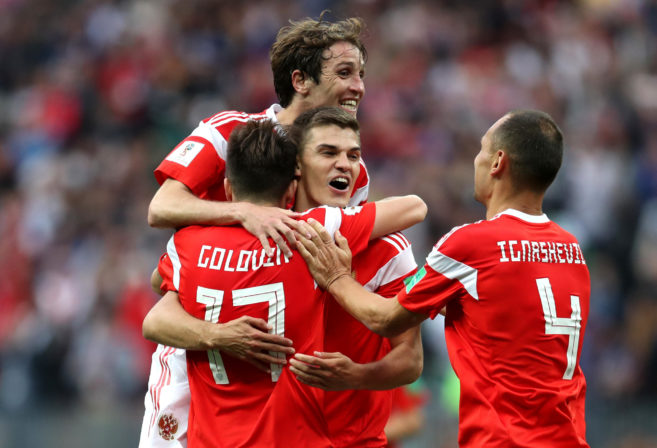 Hypocrisy? I think so.

Russia had more than its fair share of issues, and yet people in their hundreds of thousands, maybe even millions, travelled from all over the globe and put that to one side to enjoy what was one of the best World Cups in recent memory.

Tens of thousands of words were written about the barriers being smashed, as people from around the world got to see a different side to the Russia we hear about in the media. Long-held perceptions were shattered in the space of a few weeks.

‘Don’t judge a country and its people by its leaders and politicians’ was the lesson we learnt, and it’s one that should equally apply to Qatar – but one I have a feeling that won’t be.

I’ve heard numerous times from different people, many who were in Qatar, that they will boycott the 2022 World Cup as their little protest. Given these same people travelled to Russia, it’s hard to know what they’re actually protesting. The hypocrisy is breathtaking.

Qatar is ready to open itself to the world; I just hope the world is willing to give them the same chance they gave Russia.

They may be pleasantly surprised (again!) by what they find.