FIBA’s rulings after Australia and the Philippines’ massive brawl in Manila are not good enough and questions must be asked of the governing body. Questions like, do they even care?

The brawl was undoubtedly the craziest thing seen on a basketball court in recent history. Fans, coaching staff and benches were all involved. Heck, players who weren’t even part of the game were involved.

Everyone was involved in the now infamous incident which saw the Australians win by default after the Philippines were first reduced to three players, then fouled themselves out to end the farcical contest.

The suspensions announced yesterday by FIBA fall well short of the mark needing to be set to send a message.

It almost feels like a missed opportunity for FIBA to lay the law down and stamp this kind of behaviour out of the sport. On the contrary, the ‘sanctions’ – if they could be called that – seem to encourage that this sort of behaviour will be followed up by a slap on the wrist with a wet lettuce leaf.

How a man who had a technical foul put on him and then ended up under a gang of ten opposition players and staff can be suspended is beyond me.

How a man who wasn’t even playing in the game can run off the bench in street clothes before coward punching Nathan Sobey, only to be suspended for five games is even more dumbfounding.

Now, don’t get me wrong, the Philippines have had ten players and two coaches suspended, but it’s the severity of those suspensions which have fans up in arms and calling the integrity of FIBA into question. 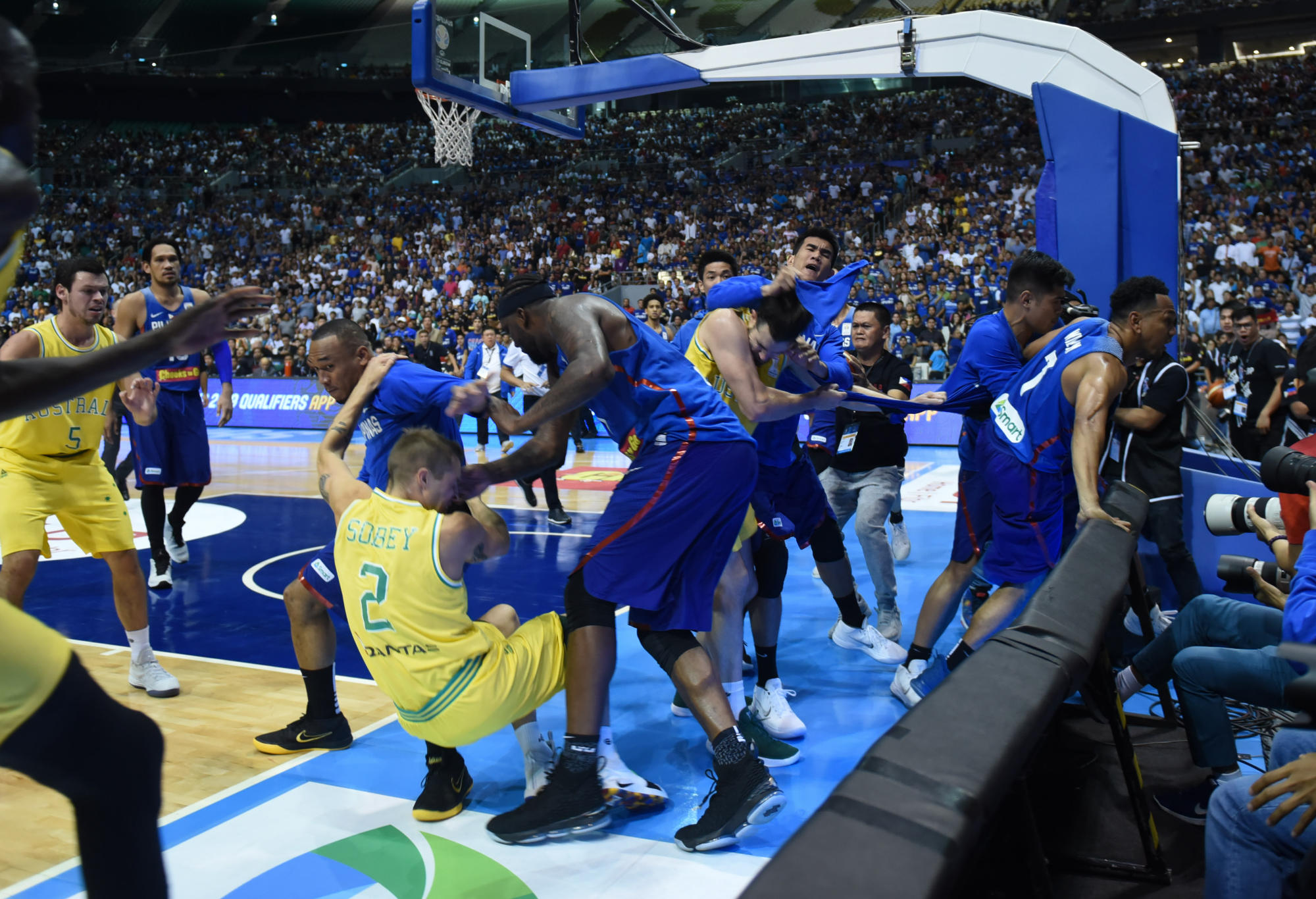 Who should cop the brunt of the fallout from the brawl? (Photo by George Calvelo/NurPhoto via Getty Images)

The suspension for Daniel Kickert is more or less correct. Five international games feels about right for his elbow. It was after a technical foul, but that doesn’t excuse the severity of it.

Chris Goulding, as I already mentioned, shouldn’t have been suspended. He could quite easily have ended up in hospital or worse under that wild pack attack behind the baseline, so what he did wrong I can’t quite work out.

Thon Maker had to be suspended as well. I would have said before the reading the Filipino suspensions three games felt about right as well – after seeing the level of sanctions handed down to the opposition team though, I’m of the strongest possible opinion he shouldn’t have been suspended at all.

At the end of the day, the Milwaukee Bucks’ forward’s running karate kicks weren’t a great look, but they were born out of defence for his teammates rather than the will to injure the opposition.

It’s a shame the same can’t be said of the actions from the host nation.

The heaviest suspension should have been handed down to Jio Jalalan. The non-playing member of the squad was sat on the bench, ran on and then got photographed punching Nathan Sobey in the jaw.

He got five. Yes, five games. The worst bit about that is, they are only international games. They can continue playing domestically during this time period, and of course, that goes for all players across both sides who got suspended by FIBA.

Daniel Kickert somehow got the same suspension as this man. It’s unbelievable. The punch delivered by Jalalan would have probably landed him up in a court room if it happened in the street – here, it’s a slap on the wrist.

Even happening on a basketball court, he should have got years from both domestic and international competition. To deliver a punch like that and not even be part of the competing squad is ridiculous. Something almost unheard of.

Every other player who ran off the bench should have been looking at lengthy bans as well – instead, a maximum of six games for any player means they will all be available should what will essentially be the Philippines B team qualify for the World Cup – that of course, will be a struggle from here on out with some tough games against Iran, Kazakhstan and Qatar to come.

Needless to say, the rest of the suspensions on the Filipino team are a joke. No one getting more than six games just goes to show how very weak FIBA have become in these matters.

The other part of this suspension grinding my gears is the coach – Vincent ‘Chot’ Reyes getting one game and a fine. How is that supposed to stamp this sort of behaviour out in the future?

While he never would have expected his players to jump into this sort of action, he did encourage his players to be aggressive in the timeout leading up to the incident. The fact he then proceeded to lay the blame on Kickert and the Australians following the incident is worrying.

He is going to be back in charge of this Filipino team for the second game of their second round qualifiers – is that really correct?

If you look at other sports, the suspensions handed down for incidents like this would be a lot more severe.

Heck, Aussie cricket captain Steve Smith copped a total of 43 matches, 12 months and a heavy financial penalty for being captain of a team who rubbed some sandpaper on the ball.

That wasn’t a great look of cause, but it’s got nothing on this. Absolutely nothing.

This incident could have easily had the power to kill someone if a punch in that pack behind the baseline had of hit Chris Goulding in the wrong spot.

It makes the suspensions handed to the Filipino players look weak as anything.

The only credit FIBA receive for this is making the Philippines play their next home game behind closed doors, as well as the fine of roughly $330,000 Australian dollars.

That is fair enough, but even in that FIBA missed a trick. The Philippines are scheduled to co-host the 2023 World Cup – given the actions of their staff and fans, the minimum should have been a stripping of any finals matches.

FIBA could have easily gone the extra mile and completely stripped them of their co-hosting right, which may have been over the top, but would have at least sent a message that no matter how passionate your fans, there is no place for violence like what we saw on that fateful night in Manila.

Even then, they should have been thrown out of the qualifiers for the 2019 World Cup. It almost feels like FIBA are trying to protect and keep the nation onside, hoping they may not naturally qualify because of the tough path they have been handed with most of their top players out.

If they do qualify, it’ll be a farce, with the images from that night in Manila coming back to haunt the World Cup and its image.

Regardless of what FIBA have done to the national association and their next home game, the rest of the sanctions handed down are nothing short of an absolute joke.