Linda Meech has ridden more winners than all bar one jockey in Victoria this season, yet is walking proof that racing is largely a man’s world.

When finals day was run and won at Flemington earlier this month, featuring the best-performed horses in winter, Meech was nowhere to be seen. Instead, she was 222km away on the Victorian border, riding winners at Echuca.

At the time of writing, the 37-year-old had notched 127 victories this season and was just one win behind Damian Lane on the Victorian premiership table. Nationally, she has ridden the eighth most wins out of any jockey this season, male or female.

That puts her season ahead of the likes of Craig Williams, Damien Oliver, Brad Rawiller, Tim Clark and Hugh Bowman in terms of winning rides. But, whereas Clark has collected 71 of his 118 winners at metropolitan tracks, Meech has only ridden 16 of her 127 in town.

Watch her closely – she gives them every chance almost every time.

It’s somewhat disgraceful that she doesn’t get more – and better – rides in the city. Owners and trainers are deluded to think she’s not a better option that most of the men riding in town.
Her strike rate at metropolitan meetings holds up well, too. This season, she has ridden 113 times in the city for 16 winners and 19 placings – a winning strike rate of 14.16 per cent despite it being that she rides a favourite in Melbourne.

The telling stat, however, is that she is outperforming expectations. In Victorian city meetings, Meech has a “profit on turnover” rate of 19.8 per cent.

What does that tell us? It says that if you put $10 on each of her runners in Melbourne this year, you would have spent $980 and made an overall profit of $194.

On the other hand, if you backed every Damian Lane runner in Melbourne, you would have spent three times as much – $3290 to be exact – and posted a loss of $710.

We all know the line: lies, damn lies and statistics – this is probably one of those examples – but it does prove Meech is able to get the job done in the city.

It should also be pointed out that Meech is a Group 1-winning rider. She’s only been given 13 rides at the elite level, but made the most of limited opportunities to win the 2015 Coolmore Classic (1500m) aboard the Peter Moody-trained Plucky Belle.

It should have been her second Group 1 win, having been denied an opportunity to ride Black Caviar to victory in 2010. Meech was only a handful of people to have sat on the back of Black Caviar at the Moody stables and the racing community was torn when she was overlooked to ride the mare when jockey Luke Nolen was suspended.

Nolen was Moody’s number one man, but Meech was seemingly a clear second and many thought it was a fairly straightforward decision that she would get the nod in the Patinack Classic at Flemington, Black Caviar’s first Group 1 race. But the owners opted for Ben Melham, rather than Meech.

It was a slap in the face to both the jockey and for female riders everywhere.

Meech told The Roar it was a frustrating moment.

“I had ridden her in work and knew the horse. I don’t think I rode her again after that,” she said.

“I think what was frustrating is that the owners were happy for me to ride their slow horses, but didn’t want me to ride (Black Caviar).”

Of course, Melham got the job done and once Nolen came back, he rode the mare in her remaining 17 victories.

But ask any racing fan or expert if Meech would have achieved the same result and all of them would give you a resounding yes. 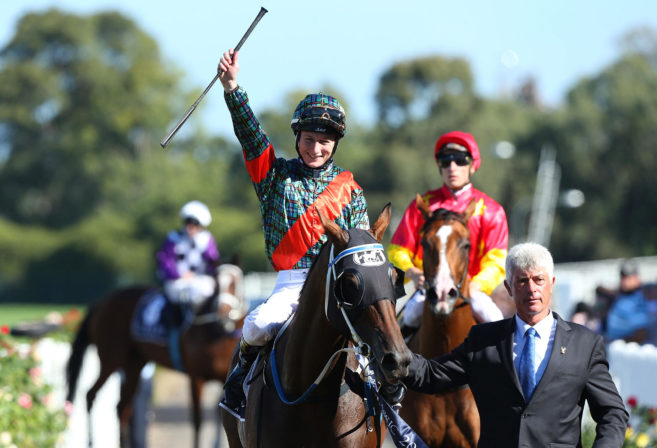 Sadly, Meech is not the only talented woman to battle for opportunities at the top level.

The likes of Clare Lindop, Michelle Payne, Nikita Beriman, Katelyn Mallyon and Kathy O’Hara have struggled in the past to transition from riding well at country and provincial meetings to getting opportunities in big races.

These women were also regulars at metropolitan meetings but often shunned for the big spring carnival days. Owners and trainers – but mainly owners – are too happy to look elsewhere when it comes to riding their horses in elite races.

Amazingly, despite the fact women have ridden professionally in Australia since the 1970s, it was only 15 years ago when Lindop became the first Australian woman to ride in a Melbourne Cup.

Previously only two female jockeys from New Zealand had ridden in the race that stops a nation – Maree Lynden in 1987 and Linda Ballantyne in 1989.

You’d have to be living under a rock not to know the Payne story, with her effort in 2015 to ride Prince Of Penzance to victory in the Melbourne Cup such a momentous occasion that a film is now being made about it.

Payne, who hailed from one of racing’s most famous families, had ridden Group 1 winners before, but the Melbourne Cup win changed her life forever. Off the track, it enhanced her profile significantly. But sadly, around the track, her reputation took a hit.

Her post-race comments were most likely the cause.

“It’s such a chauvinistic sport, a lot of the owners wanted to kick me off. Everyone else can get stuffed (who) think women aren’t good enough,” she said in her post-race interview.

“I would like to say that, you know, it’s a very male-dominated sport and people think we are not strong enough and all of the rest of it … you know what? It’s not all about strength, there is so much more involved.”

When Payne crossed the finish line, Meech was in the car on her way to Stawell, listening on the radio.

It was a strange day for Meech as she had the day off. For those who don’t know, it is incredibly rare for a jockey to have a break on Melbourne Cup day. It’s by far the busiest day on the racing calendar.

Meech said she was rapt for her friend and colleague.

“I had been texting Michelle in the lead-up to the race, in particular before the Moonee Valley race where he had to run well to get a run in the Melbourne Cup,” she said.

“We both thought it was a good chance. My mum backed her.”

Meech has a close connection to the large Payne family. She learnt a lot from “old Paddy Payne”, Michelle’s father, who showed Meech how to use a whip and built her confidence.

By her own admission, Meech wasn’t a great rider when she came across from New Zealand as a teenager. She had been apprenticed to the legendary Kiwi trainer John Wheeler, who sent her across the ditch with half a dozen horses he had racing in Australia.

“I wanted to be good but I was pretty useless, really,” Meech said.

Her first Australian ride was at an Anzac Day meeting at Avoca, a small country Victorian town that draws a big crowd to its traditional April 25 meeting. She went along with Bernadette Payne, Michelle’s older sister and stayed with the Payne family in Ballarat.

“Paddy got me going. I wasn’t a pretty rider, but he taught me how to use a whip and gave me a lot of feedback. Importantly, he told me when I was doing the right thing,” Meech said.

On that history-making Melbourne Cup day, she almost called into the Payne homestead in Ballarat.

“I was thinking about dropping in to watch Michelle in the race with Paddy and the family, but I didn’t. I wish I did,” she recalled.

Meech said she agreed with Payne’s post-race comments about racing still being a man’s world, but was also far more diplomatic.

“If I spent time dwelling on things like that I’d spend my whole life thinking about it. But it’s frustrating,” she said.

That’s racing. Women are still largely untrusted to get the job done in the biggest races. Despite some setbacks, Meech appears to be riding as well as ever. She said the key to her success and improvement as a ride was to “care less”.

“It sounds strange, but I don’t try as hard these days. I think you can overthink things. I have got one of those brains that tries to think too much.”

Getting better rides, particularly at the country tracks, also helps her strike rate.

“I’ve got a lot of trainers who look after me now and I get to be a bit pickier with my rides, which always helps,” Meech said.

She still sets goals but didn’t want to share them publicly.

“If I share them they become other people’s goals and not mine,” she said.

“I would like to win a Castlepoint Cup, though.”

It’s worth typing ‘Castlepoint races’ into Google. You’ll see they are held on a beach in a beautiful coastal town in New Zealand. There’s no guarantee the races are even held each year. They can only be held when the beach conditions and tides align. Instead of betting, you buy a ticket for $2 and get allocated a random horse.

That’s Meech in a nutshell. Despite all of her successes – she’s ridden well over 1000 winners as a professional jockey – she still loves the quiet life in country Victoria and still yearns to win a Castlepoint Cup.

It’s unlikely you’ll see her riding into her senior years but you should still see her name in the racebook as a trainer.

When Racing Victoria changed its rules to allow jockeys to take out a trainers’ licence, Meech applied and now has a couple of horses in work at Stawell. She said it was a refreshing change from race riding. In March this year, she saddled up her first winner when Beeokay saluted at Swan Hill.

“It was a great thrill to do that. That was one of my goals and I achieved it.”

Her other goals will remain private, but it should be the goal of the racing industry to ensure that women are treated as equals and are given the opportunities to succeed at the highest level.

It’s an indictment on racing when Linda Meech is riding at Echuca instead of Flemington.