At the beginning of this season, Hawthorn found themselves at a crossroads in terms of list management – not yet needing to undertake a full-blown rebuild, but with some questions over the depth of younger players.

The additions of Jarman Impey, Jaeger O’Meara, and Tom Mitchell over the past two seasons looked inspired, but questions lingered as to the potency of their ageing forward line, and over the quality of their mostly untried youthful band.

Past the halfway point of the season, we’re none the wiser as to the overall calibre of the Hawks’ list.

Their biggest issue is that they’ve reached the inevitable point where, because of their sustained success, younger players (understandably) haven’t been given as much opportunity, and as the core of older stars come to the end of their careers, there is a depth gap.

Nearly every successful team grapples with this challenge at some point – some, like Geelong and Sydney, have managed to avoid this through shrewd selection, ensuring younger players are given opportunities alongside their core of stars; others, like St Kilda, are still struggling to ascend the ladder after relying for too long on their older lot.

The Hawks are trying to find a balance by giving games to their younger players, but that’s not to say they have it all taken care of.

First and foremost is the need for a key forward to eventually replace Jarryd Roughead. Both coach Alastair Clarkson and Roughead have been ambiguous as to how many more seasons the captain is likely to play, so there’s the potential that next year could be his last season.

Currently, Hawthorn really only have the raw Mitchell Lewis as a developing key forward, and he is nowhere near ready to shoulder the forward load. They have several mid-sized forwards developing behind Jack Gunston, including Tim O’Brien and Dallas Willsmore, but neither have been cemented a spot in the team. 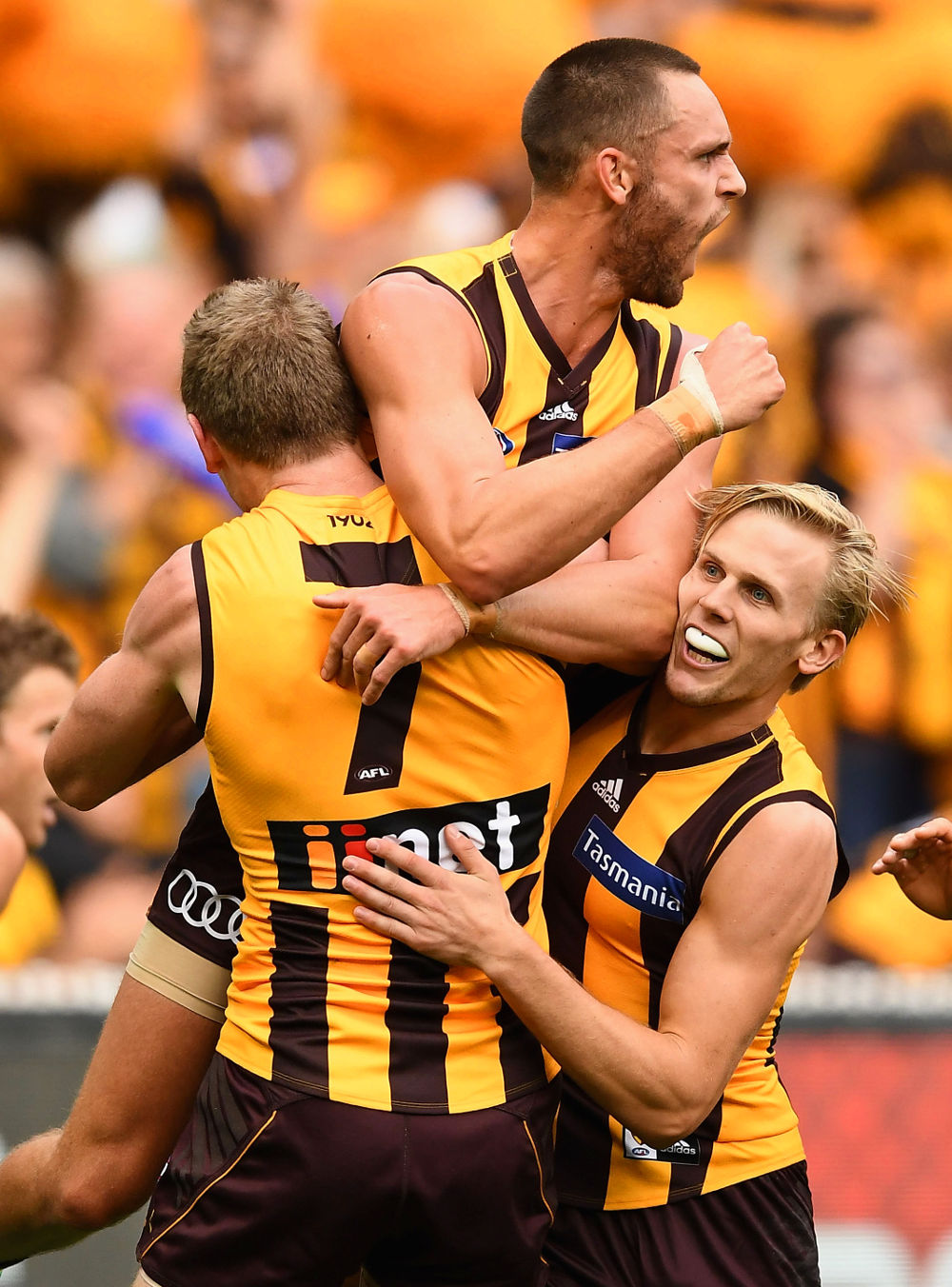 Veterans Ricky Henderson and Ryan Schoenmakers have been solid contributors, but won’t (and shouldn’t) be part of the team in the next few years.

The enjoy having goal-kicking midfielders and a bevy of smaller forwards. Luke Breust is a star in this regard, but, with Cyril Rioli retiring, and Paul Puopolo likely to hang up the boots at season’s end, this area also looks thin. Dylan Moore, a 2018 draftee, may fit the bill here, but again, he needs time to develop.

The Hawks have loaded up on midfield depth, and while O’Meara and Mitchell were no-brainer pick-ups who have improved the team, doubts remain over the quality of their young band.

Kieran Lovell is the most striking example – he was a first-round draft selection in 2015, brought in ostensibly as an eventual replacement for champion inside midfielder Sam Mitchell, but has only played two career games, both back in 2016. This is despite displaying solid form in the VFL over that period, and despite inside midfielder Will Langford being on the outer this year.

Teia Miles has found himself in the same position, while Jono O’Rourke has continued to struggle with injury and poor form, managing only 11 games over the past three years.

After those two, there are a clutch of youngsters, including Ollie Hanrahan, James Worpel, Conor Glass, James Cousins, and Harry Morrison who are all still developing (although Morrison is starting to establish himself in the team, having played 14 games this year).

The ruck is perhaps the area where this challenge is most pronounced – Hawthorn have two incumbents in Ben McEvoy and Jonathon Ceglar who have been excellent over the past few years (noting that Ceglar missed most of last season with an ACL injury), but also have a good up-and-coming ruckman in Marc Pittonet.

Pittonet was drafted way back in 2014, but has managed only three AFL games, all of them in 2016, largely due to the good form of both McEvoy and Ceglar. Out of contract at the end of the year, at season’s end he’ll likely seek a move to somewhere with more opportunity, given McEvoy and Celgar don’t look like relinquishing their grip on the ruck mantle anytime soon – but that would leave the club with a massive hole if either of those two are injured.

They may decide to go with a ‘surrogate’ ruckman at the hit-outs, and back themselves to win the clearances around the ground, but the Hawks haven’t shown a penchant for this style of play.

In the back half, the reinvention of Ryan Burton, James Sicily and Blake Hardwick allowed Hawthorn to cover the loss of Luke Hodge, Jordan Lewis, and the injury to Shaun Burgoyne.

The Hawks do, however, lack leg speed in this part of the ground, especially when they play two key defenders, in James Frawley and Kaiden Brand. At 24, Brand is seen as a long-term replacement for Frawley, but again, is still maturing.

Underneath those two, the key defensive stocks are thin. Kurt Heatherley, drafted in 2013 as a Category B rookie from New Zealand, had originally been billed as a long-term prospect in this area, but he’s only managed five career games, with none this year. Out of contract at the end of this season, he’s another who could leave for greater opportunity.

To address these challenges long-term, recruitment over the next two or three years is crucial.

The obvious trade target to fix their forward line is Gold Coast’s Tom Lynch – they have the cap space, given Rioli’s retirement, and their successful record and excellent culture will, as always, position them as a destination club. He also shapes as a potential future captain of the club; the Hawks have long been known for recruiting players with decent character, and Lynch certainly fits the bill in that regard.

The other benefit here for the Hawks is the fact that, as a restricted free agent, the club won’t need to give up anything to acquire him. 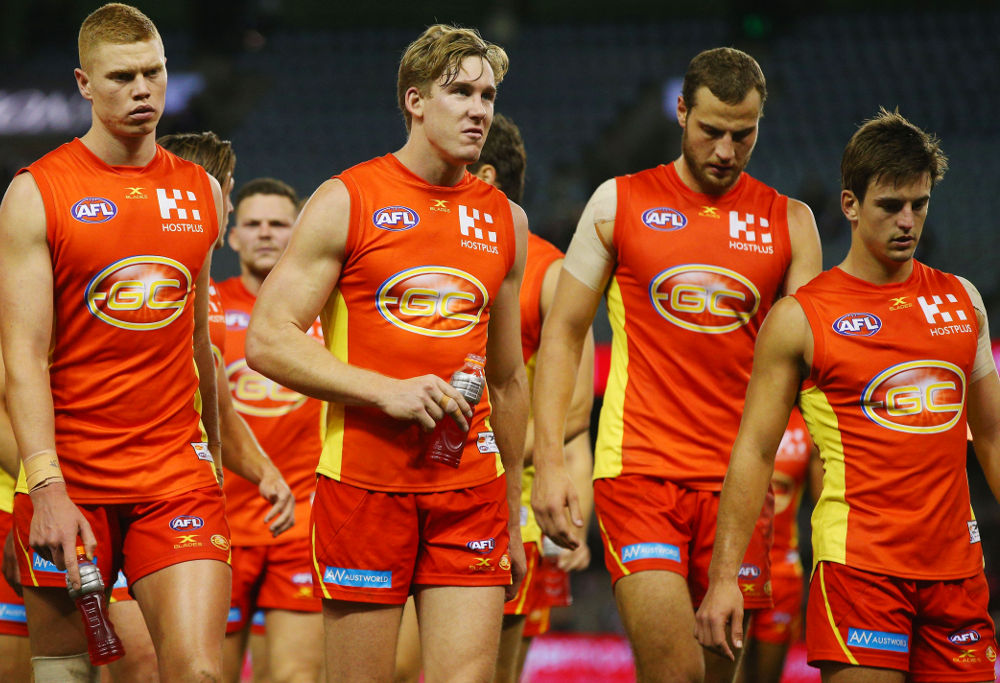 As for other targets Hawks list manager Graham Wright should look at:

Jack Scrimshaw (Gold Coast)
Nominally listed as a 193cm defender, in his draft year, in 2016, he also played on a wing. As such, Scrimshaw has the potential to develop into a big-bodied midfielder – the type of player most ‘in vogue’ at the moment – and provide a point of difference from the rest of the midfielders at the club.

He’s contracted until the end of 2020, but has apparently been suffering from homesickness, and looks likely to pursue a move back to Victoria at the end of the year.

He was taken at pick 7 in 2016, and has played four games; given he’s still a developing prospect, it would be difficult for the Suns to demand a top-ten pick for him, but they would likely ask for Hawthorn’s second-round pick (currently around 28-29).

Kieran Collins (Western Bulldogs)
Collins is a key defender who was highly rated in the 2015 draft for his ability in one-on-one contests. Despite this, he has played only one game in three years.

Out of contract at the end of the year, he’d likely come cheap, and would give the Hawks a quality young key defender who is ready to step into AFL.

Jay-Kennedy Harris (Melbourne)
Another who has failed to cement a spot in an AFL side since being drafted, despite possessing a mountain of talent. He’s a skilful and quick midfielder/forward with excellent game sense. He’s played 30 games, but, since 2014, when he played 14 games, has played only eight, six, and two, respectively, in each of the following seasons.

Another out of contract at the end of 2018, he seems to be on the outer at the Demons, and could thrive as a small forward.

Dan Robinson (Sydney)
Robinson has been in and out of the Sydney line-up since he was drafted in 2012, having only played 21 games in that time, and never more than seven in a season, but he clearly has talent, and is too good to be playing in the NEAFL.

Granted, a shoulder injury kept him out for most of last year, but he has also been dropped this year for form-team balance issues. He’s played mostly as a forward, but with his speed, he’d be well deployed in the back half.

Luke Partington (West Coast)
Another victim of his team’s success, Partington has only managed six games since being drafted in 2015. He’s a tough inside midfielder who is a ball magnet at WAFL level – averaging 24 disposals in his 40 games – and whose leadership skills are highly regarded.

He should come cheap, and his presence in the midfield would allow O’Meara to roam more freely as an outside runner, as well as provide support to Tom Mitchell.