Stop laughing, this is football

Is there anything more disgusting than a sportsperson being friends with their opponent? This eternal question came to mind this week after seeing Bernie Vince, after his Melbourne Demons went down in a close one to Geelong, chatting amiably with Cats star Patrick Dangerfield.

Not just chatting, but smiling. Like he was happy. Like he enjoyed the company of his opponent.

Could Vince have chosen a more obvious way to show he didn’t care whether his team lost? He may as well have put fifty dollars on Geelong at Sportsbet, such was his blatant joy at being defeated. It’s no wonder Melbourne lost, as apparently Vince was on Geelong’s team all along.

Opinion is divided on the subject of players showing happiness. Some people think it is utterly disgraceful for a vanquished player to display any emotion other than incandescent fury or suicidal sadness.

Others think it is fine for a man to betray his teammates, his jersey and his fans by demonstrating his complete contempt for the game and everything it stands for.

Perhaps the truth lies somewhere in the middle. No, it lies in the first bit.

The fact is, nobody who can muster a smile or a laugh or a sense of perspective in the wake of a loss deserves to be called an “athlete”.

Crying after a defeat: fine. Punching the dressing room walls over and over until your knuckles are a bloody mess: great. Drawing a knife and vowing revenge: brilliant.

But smiling? Nothing but a foul illustration of the kind of moral turpitude that could make a man shirk a tackle or stop play to check if an unconscious player is alive. 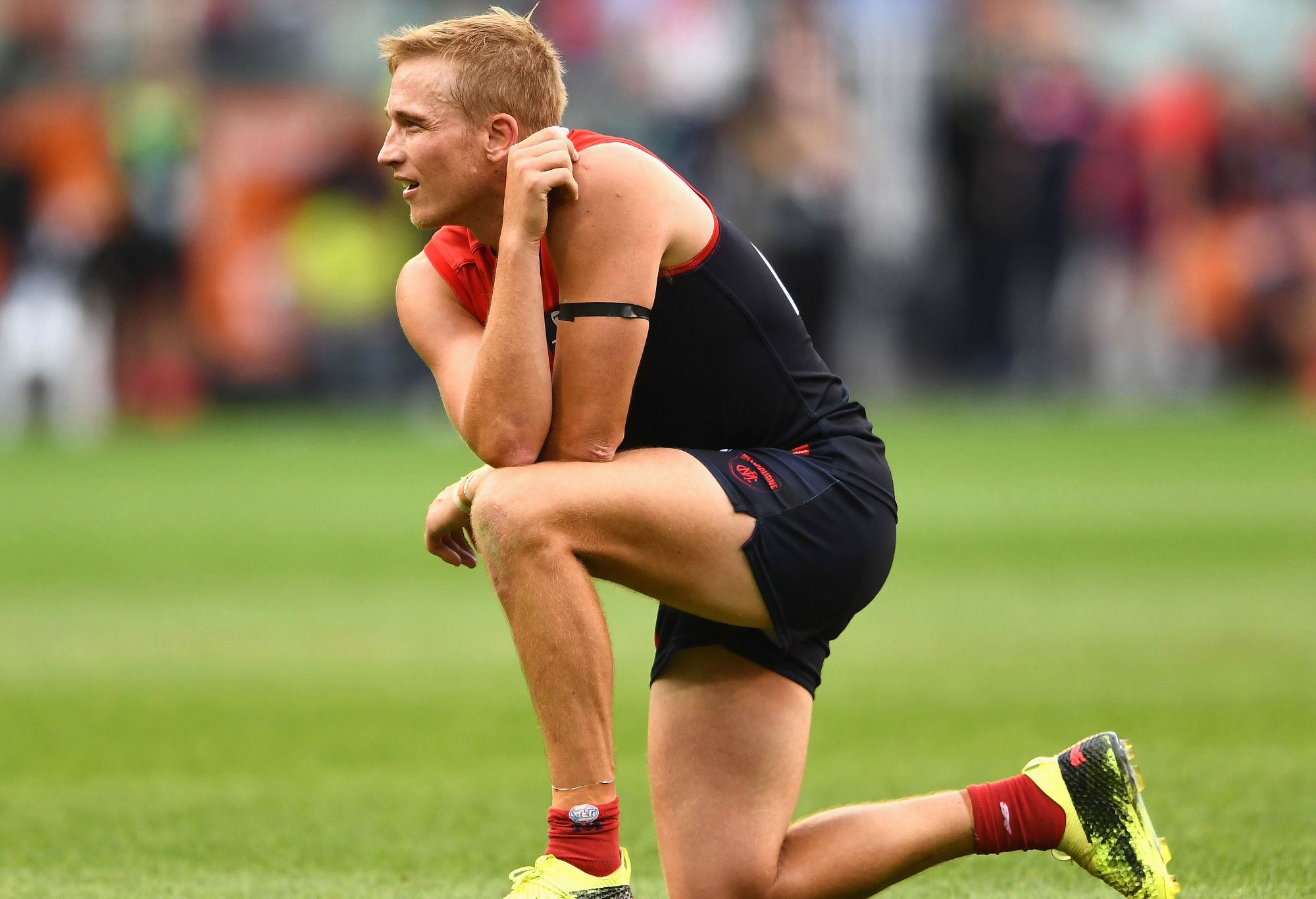 I blame Arthur Summons and Norm Provan. Ever since these two rugby league legends were photographed embracing after the 1963 grand final, in an image immortalised in the premiership trophy, people have got the crazy notion in their heads that it is not only acceptable, but admirable, to be friends with the opposition, to show grace and good humour in defeat, and to believe in that filthiest of phrases, “it’s just a game”.

How different modern attitudes might be if it were widely known that while they embraced, Provan whispered in Summons’s ear, “I am going to murder your family tonight.”

That’s the kind of attitude that Provan hoped to instil in future generations, yet the lying camera caused the exact opposite message to be disseminated.

A lot of people might respond to this debate by mentioning “sportsmanship”. Sportsmanship is indeed a very important value to have, but what is sportsmanship, really?

For me, the answer is simple: sportsmanship is the principle that one should always try one’s hardest on the field, leave nothing in the tank in the pursuit of victory, and once the full-time whistle has blown, hate all rival players with a white-hot intensity that consumes all else within oneself.

I don’t think this is too much to ask – why, after all, does the AFL Draft Camp rank players according to their capacity to hate, if they are not expected to make use of this capacity in their professional careers?

You want to know that their fragile psyche is on the brink of total collapse and that self-harm is only a heartbeat away. That’s how you know that your players are trying.

And how can you know that, if they go around laughing with the enemy?

I’m not saying that a sportsperson, after a torrid on-field battle, should walk up behind their direct opponent and punch them in the back of the head.

I’m just saying that they should want to, and if there were no police presence in he vicinity, definitely be willing to give it a go. As the great Brisbane Lion Jonathan Brown said:

“I remember the great Leigh Matthews when Michael Voss laughed after we got beaten by 10 goals while he was shaking hands with James Hird. Leigh absolutely exploded and said Vossy, you don’t know how to captain yet. Follow me, son, and I’ll teach you how to be a captain. Voss went on to be one of the greats and we never laughed again.”

What more beautiful lesson to youngsters could there be than “We never laughed again”? Let’s hope all players, AFL and elsewhere, take heed: if you want to be a champion, remember the inspirational tale of the Men Who Gave Up Laughing, and make sure that wherever you go and whatever you do, you never let go of hatred.