In the battle for the attention of rugby league fans, there’s a sure-fire way to appeal to as many of them as possible: bash the refs.

You see, in any game of footy there will be a winner, and there be a loser. That, in turn, means you will have winning fans, and losing fans.

Such is the love and passion that fans have for their teams, they tend to get upset when their team suffers a loss, and thus seek to vent their frustration.

The target of that venting can be the players and the coach, especially if the team didn’t play very well.

The other target – and more often than not, they are – is the referees. ‘We wuz robbed’ is a common sentiment in sport, right across the globe. However, it’s particularly prevalent in rugby league, a sport where whinging is part of its DNA.

It generally means that after any game, you potentially have 50 per cent of the audience very receptive to any notion that the refereeing was substandard, biased or incompetent, and therefore cost their team a victory.

From a journalistic point of view, that provides something of a goldmine.

There are eight games a round, so that’s eight losing fan-bases that are usually only too happy to lay into the refs. Oh, and if those same eight teams actually win the following week, guess what? Bashing the refs again means you’re now appealing to the other fan-bases as well.

What a bonanza! Now you’re appealing to everyone!

With TV, radio, newspapers, websites, podcasts, blogs, Twitter, and more all vying for rugby league fans’ attention, ref bashing is low-hanging fruit. It affords the opportunity to appeal to a large number of people, unified by what they want to hear.

The problem with it is two-fold.

Secondly, it creates a culture where it’s okay to blame the referees; it enables everyone to jump on the bandwagon.

This is something that proves especially convenient for coaches, who, post-game, can shift responsibility away from themselves for the result.

This combination of media, coaches and fans aggressively ref bashing is dangerous because it puts even more pressure on the officials, which is probably why mistakes are made in the first place. Which makes refs… human. Just like the rest of us.

As long as there is the human element in the game, there are going to be mistakes.

That doesn’t mean you have to be happy about them when it affects your team, and it doesn’t mean the sport shouldn’t always be striving to eliminate as many of them as possible, but to think they’re not going to happen is naive. Refs are going to make mistakes, peeps.

To be clear, I’m not suggesting that referees shouldn’t be held accountable for their mistakes. They most definitely should be. That includes being dropped or reprimanded – just as a player is after a poor game. 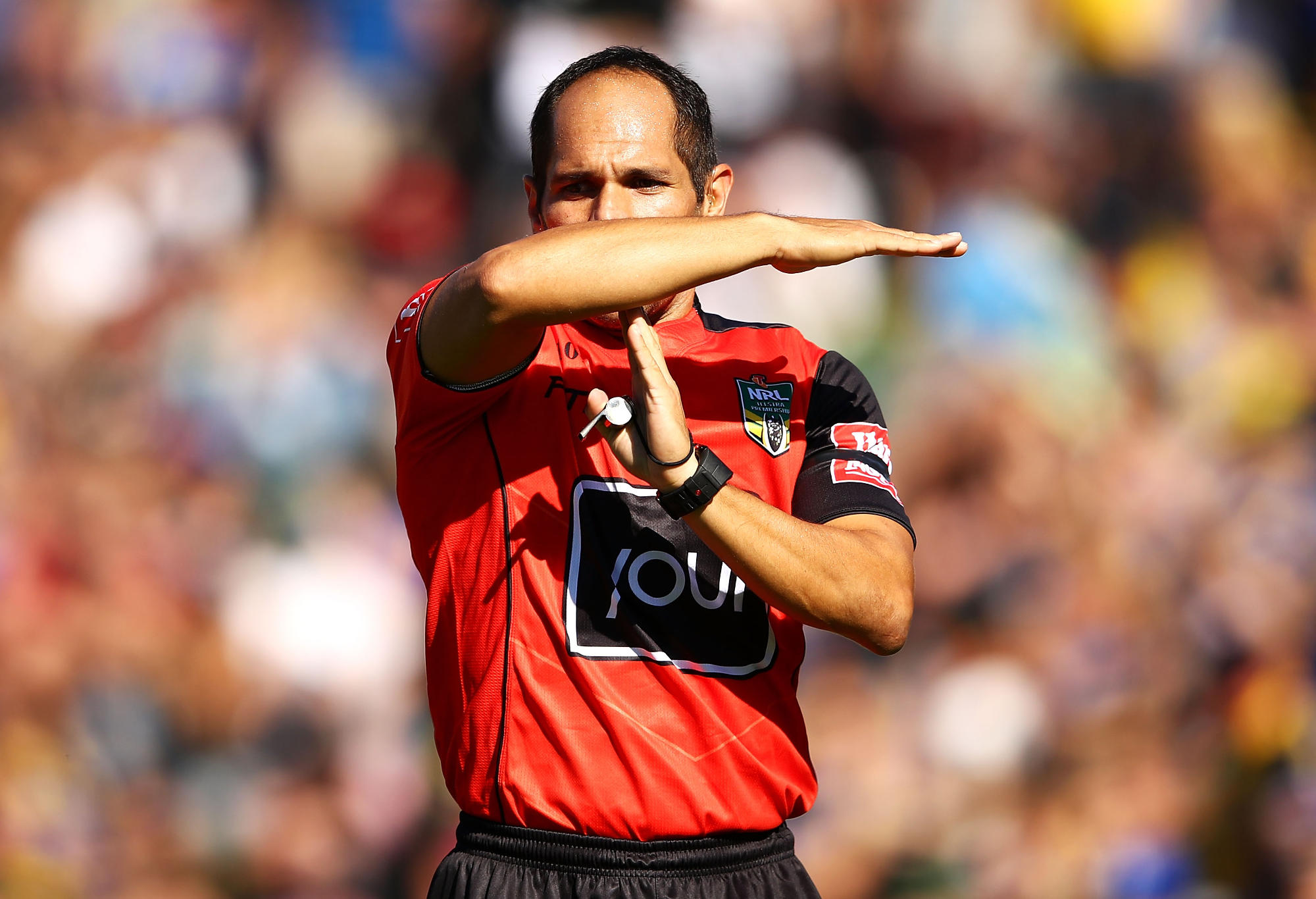 I’m also not saying that rugby league personalities shouldn’t discuss the refereeing. It’s often a topic that needs to be talked about. However, please spare me the crisis merchants’ narratives of “worst it has ever been”, “the sport will be dead in 15 years”, “sack everyone”, and the like.

Pile on the refs, and you’ll easily find an audience happy to hear what you have to say. Do so in such sensationalistic fashion, and you’ll really whip the crowd into a frenzy.

When said crowd, plus the media and coaches, are allowed to blame the refs, confirmation bias occurs. They go looking for proof that the refereeing is killing the sport, and that ‘evidence’ is extremely easy to find, because refereeing mistakes will always occur. They always have.

Yet instead of them being viewed as just that – mistakes – they’re used as vindication for the ‘sky is falling’ narrative.

At this point, I could make a plea to the rugby league media to stop the ref bashing, like others have.

Yet if that’s what provides an audience, you can somewhat understand them continuing to promote such garbage. If an audience is watching, listening or reading, then they are consumers. Consumers provide revenue, and businesses are in the business of generating revenue. You can’t fault the media if people lap up what they serve up.

So, instead, I’ll turn the spotlight the other way: to the fans. If we – collectively – decide that’s not the type of journalism we want, the laws of supply and demand will kick in. If the media say they’re simply giving the audience what we want, perhaps it’s time to show them we don’t actually want sensationalistic diatribes.

Perhaps it’s time to not click, read, watch or listen to any crap that we feel is actually hurting the game.

Perhaps it’s time for some of that higher quality fruit; the type a little higher up on the tree.