With four AFL rounds to go, every spot in the eight is up for grabs

The state of the game truthers were left red-faced once more as the footy threw us another series of curve balls in this tense, competitive season.

Normally by this stage of the year, we have some semblance of order across the AFL ladder. The non-finalists are mostly free to tank to their heart’s content; the finalists to take their foot off the pedal. History says the Round 19 ladder will tell us almost everything we need to know ahead of the first weekend in September. Not so in 2018.

Bar Richmond’s place in the top two – almost a certainty now, given the Tigers’ draw and that they’re two games clear on top with the best percentage by a mile – every spot in the top eight is up for grabs. The same 12 teams we’ve been talking about for the past two months are all that’s left in it: Fremantle could win out and it still won’t make it into the eight because it’s about 600 points of margin behind Geelong on percentage.

What a glorious place to be. Not every game is going to matter as we sort out the finals seedings, but a bucketload of them will. Take Round 20, for example: Richmond versus Geelong, Hawthorn versus Essendon, Adelaide versus Port Adelaide and Sydney versus Collingwood are all enormous, season-shaping games.

No one inside the eight bar Richmond and West Coast is safe, and even the Eagles could quickly find themselves grappling for a top-four spot should they trip up again as they did against North Melbourne.

West Coast has a sneaky-tough run home: Fremantle (in what looms as their final hurrah for season 2018), Port Adelaide away, Melbourne at home and a trip to the Gabba to face Brisbane. North in Tasmania has never been a fun journey for the Eagles – they’re 1-2, and the games have generally been low scoring scraps – but this weekend’s outing was surely the worst yet. It put them in a precarious position, with Round 22’s game against the Dees now taking on greater meaning.

Collingwood played the Tigers more or less to a draw through three quarters on Saturday afternoon. But like all who’ve come before them, the Pies couldn’t stick with the champions in the last. That might have been driven by two game-ending injuries to Jeremy Howe and Matt Scharenberg but one assumes it’s because that’s just what Richmond do in 2018.

The signs for Collingwood were uniformly positive: they threw down in the second and third quarters with some bursts of aggressive play, and often looked the better team. There is no shame in losing to Richmond at the MCG. 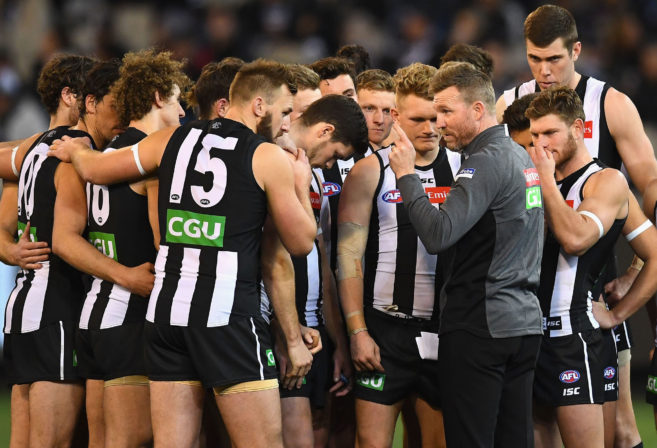 Port Adelaide did what they needed to do against the Western Bulldogs, no more and no less. And well might they have because their run home is mighty tough: the Crows, Eagles, Pies and Dons await.

Doing just enough has been the story of Port Adelaide’s season in many ways – they are a mostly uninspiring team that can grift and grind their way to victory. As we discussed a couple of weeks back, Port might be the league’s Tiger killer, because of that strength around the ball and midfield defence. Right now they would get the first look at them come September.

The Giants are back. That hellish May is all but forgotten now; GWS have recovered and looms as this season’s September wildcard team. A smallball approach, if not as pure as the textbook with Harry Himmelberg and Adam Tomlinson (at times) up forward with Rory Lobb, has seen the club address its most glaring weakness: forward half transition and conversion. St Kilda made the Giants work but the game always looked in hand for the home side.

They have a chance to leap into the top four before a trifecta of ladder-shaping encounters: Adelaide, Sydney and Melbourne – the latter which could blow the whole thing up, and which is sure to be a candidate for the league’s first-ever Monday night Round 23 game.

Melbourne really wanted the W that was on offer against the Crows, and they got it. Their coach Simon Goodwin – the anti-Chris Scott when it comes to coaches box behaviour – was so pumped at the siren he gave his data guy a concussion. The Dees were on the verge of another season of shouldas, couldas and wouldas but appear to have righted things, balancing their attack on the ball with some more structural integrity defensively.

They, too, have a spicy, ladder-shaping run home. You’re sensing a pattern here I hope.

Hawthorn once again finds themselves in the eight, ahead of schedule but not without merit. They made a young Fremantle side look a level below standard, toying with them but perhaps not putting them to the sword as strongly as they could’ve.

Hawthorn’s selected side has seven guys aged 29 or older, and just four guys aged 21 or younger. They’re going for it. But they can’t afford another outing like the one against Brisbane a fortnight ago. Be afraid.

Finally to the Cats, who clawed back into the eight on the back of a strong second half against the Lions. Brisbane were riding high and were perhaps due a dud half of football; it didn’t look like it was coming for the first hour on Saturday.

The Lions have become a tricky assignment over the past two months, and Geelong did well to navigate their aggressive ways. Tom Hawkins devoured Harris Andrews on the latter’s return, and has wedged his way into the All Australian conversation that is just about to get going for real.

We could draw the line there and be relatively happy with this as our eight best teams. Something is up at Sydney and it’s not clear what. My theory: it’s the youngsters doing what youngsters tend to do (and which they did not do for most of last season).

North Melbourne has a cushy draw, and with a weak percentage compared to those above them will need to win two of their next three to be in the conversation for a Round 23 Bradbury. They can do it.

Essendon are streaking their way back into said conversation, but given they’re a game back, they have to win out to be any chance. Adelaide need to win out, and for some seriously quirky stuff to happen above them, to make it from here. They’re this week’s mathematical chance team.

It’s all up for grabs, and it starts on Friday night. Let’s hope sanity prevails and we talk about the footy this week.