Now that the wildly successful Russia World Cup is but a happy fading memory, the football world’s attention has gone back to intensely disliking the thought of where the next edition of the greatest show on earth will be hosted.

Ever since Qatar were awarded the rights to host the 2022 World Cup in December 2010, football has largely failed to get its collective hive mind around the concept.

That’s not too difficult to understand given the incredibly controversial nature of the bidding process, the “brown paper bag” stories, the utter unsuitability of Qatar as a host country according to FIFA’s own criteria, the insanity of hosting a World Cup in 50-degree heat (since solved by moving the tournament to December) – in short, pretty much everything about the decision has been debated and rejected by the football community in the ensuing seven and a half years. It is the story that simply won’t go away.

What has been plainly obvious is that FIFA has been more than willing to move the goalposts in order to justify the executive committee’s decision on that cold winter’s night in Zurich.

The moving of the tournament’s dates in itself represents a radical shift, and it’s worth noting that Australia’s flawed bid might well have been more appreciably backed had they known the winning country could host a World Cup in November and December rather than fitting a schedule around the demands of three other football codes in June and July.

Despite the incessant calls for Qatar to be stripped of hosting rights due to the hugely suspect nature of the bid process, FIFA have stayed loyal to the tiny Persian Gulf country, concluding that no corruption was evident after investigating the bidding process itself.

The past five years have seen the downfall of a number of key FIFA personnel from that era, including former FIFA president Sepp Blatter. In all, 11 of the 22 members who voted on the 2022 World Cup hosting rights have been fined, suspended, banned for life or prosecuted for corruption. 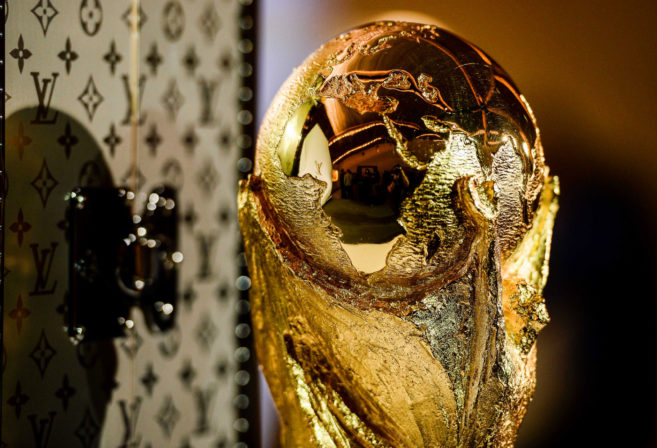 Let that settle for a moment. Half of the committee responsible for awarding Qatar the 2022 tournament lost their position due to wrongdoing, yet FIFA doggedly sticks with Qatar and continues to declare that the bidding process was free of any tainting. Their loyalty to their next hosts is rock-solid because, let’s face it, they have to be loyal.

FIFA are in a classic catch-22 with this. They can’t take the tournament off Qatar due to corruption in the bid process because to do so means they – or at least an older version of their administration – admit to the corruption themselves. They are seen to be sticking with the hosts because the alternative is to go down with the ship.

I have said previously that FIFA could not possibly take the World Cup off Qatar for this very reason but that at some point in time, if the heat (no pun intended) generated by the decision became too much, they’d find an alternative reason, one that would annul the process without implicating them in it.

Allegations have come to light in the past fortnight about Qatar’s bid team taking highly illegal steps to destabilise the bids of its rivals from USA and Australia. The allegations were made by England’s Sunday Times and the source was a whistleblower on the 2022 bid team, with the information not being made available to FIFA’s original corruption investigation.

The allegations, which have been well-documented on The Roar, include paying a PR agency and former CIA operatives to disseminate fake propaganda about bids from the USA and Australia and paying a university professor $9000 to write a damning report on the economic cost of a World Cup to the United States. There was also the alleged recruitment of journalists and bloggers to promote negative stories in the USA, Australia and international media.

That’s pretty funny, really. Qatar could have saved their money in Australia – the AFL media did it for nothing.

The allegations are in direct contravention of bidding rules, but we’ve seen that these have been relaxed in the past. However, it does give FIFA a smoking gun to use as an out if the allegations prove to be true.

Crucially, these allegations do not implicate FIFA in any wrongdoing, only the Qatari bid.

As such, if they are proven to be true, they give FIFA the chance to destroy Qatar’s dreams without being caught in the same bed. As cynical as such a decision would be, if FIFA are privately flagging in their support for their 2022 hosts, they might soon have the means to save face with an about-face.