West Coast coach Adam Simpson admits he was a bit “young and dumb” with how he used to approach western derbies, but he quickly learnt his lesson.

The Eagles have the chance to firm up their position in the top two with a percentage-boosting win over the Dockers at Optus Stadium on Sunday.

During his first year as Eagles coach in 2014, Simpson tried his best to pump up the derby to his players in a bid to evoke a powerful response.

West Coast lost both derbies that year, and ended up missing out on the finals by a solitary win.

But Simpson has since found the recipe to success in derbies, with West Coast on a six-game winning streak against their arch rivals.

The build-up to this week’s derby has been strangely low-key, and that suits Simpson just fine.

“I made the mistake when I first got to the club to try to build it up as a little bit of a different feel and make it more of a finals type of game,” Simpson said.

“But I learnt really quickly that that’s not how you operate.

“I was just young and dumb. That was my interpretation on it.

Fremantle (7-11) are likely to finish the year in 13th spot – the third straight season they have missed the finals.

But Lyon has given important game time to the club’s young players, and Sunday’s derby result won’t be the be-all-and-end-all for Fremantle.

“There’s still a few that want to focus on wins and losses, but I wouldn’t have thought that’s our clear KPI.

“The ladder positions are telling us it’s going to be difficult (against the Eagles on Sunday).

“But we’ve overcome the odds this year and we really want to improve our football.” 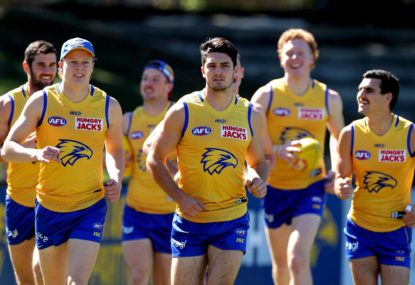