Ladder leaders Richmond went head-to-head with Geelong at the MCG, in one of the toughest encounters of 2018 on Friday night.

For the Tigers, it was another win at the Victorian fortress, which saw them hold onto first on the ladder and almost guarantee a top-four finish for the second season in a row.

For the Cats, at least they could walk away with their heads held high, coming closer than any other side has to toppling Richmond at the MCG in more than 12 months.

The coach dropped a chain of bizarre comments about his side, the opposition and the match overall in his post-match press conference – each of which are deserving of some thorough analysis.

“I’m not worried about what happens after each weekend except the last one,” Scott said.

“We’re disappointed but we’re not discouraged with the performance (against Richmond). We had our chances and I thought we had the better of the game for big parts of the game.

“I don’t think anyone from our footy club should be walking away thinking we need to change anything drastic to beat Richmond.” Ignoring any sort of examination of Scott’s clearly agitated tone and attitude, the comments above look like they would have more in common with tilting at a poker table as opposed to authentic football analysis.

Scott really believes his side had the ‘better’ of the game for big parts of the game? When exactly was that?

The Cats managed to hold two leads across more than 120 minutes.

The first came in the early minutes of the opening quarter. Quickly undone.

The second came shortly after halftime, with Geelong kicking the first and snatching the lead. Richmond then piled on four more goals for the term and kept the Cats out of the conversation.

Even in Geelong’s best quarter – the fourth – they still only outscored the Tigers by two majors. Meanwhile, Richmond, particularly in the first half, slaughtered their opponents in inside 50s.

Geelong managed to out-possess Richmond 404-337 in total in a match with both sides struggling with disposal efficiency.

In spite of this, the Tigers led the overall inside-50 count 68-46 and it’s a testament to Geelong’s defensive six that they were able to withstand such a flood of pressure.

But are we really going to pretend that a boxer, pressed against the ropes for nine consecutive rounds, somehow holds the advantage at the end of a fight just because he doesn’t get knocked out? No, you lose on points. Just like Geelong literally did on the scoreboard.

“They’re the best side in the competition at the moment, but they need a lot to go right for them at the moment. No question,” Scott said.

“I don’t mean to be jumping on the front foot and saying ‘they’re not that that good.’ They’ve won 19 in a row at the MCG, they’re good, but I think particularly last week I thought Collingwood were on top for big parts of the game.

“When you talk about the juggernauts of the competition of the last few years, you’re never in the game against them.

“So I don’t want to overstate it, but we went down by less than a kick tonight and I think we can do better.”

The comments from Scott get increasingly more brazen the deeper we dig. Richmond needs a lot to go right for them to win? Doesn’t every team? 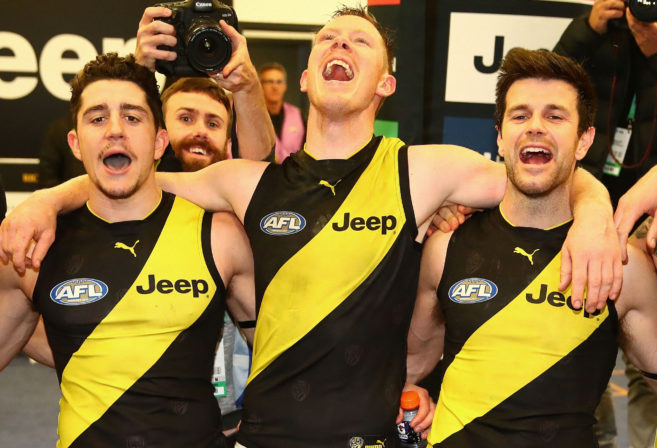 Seems like the Tigers have a lot going right for them in 2018 if they’re a win clear on top of the ladder after 20 rounds.

Richmond are a good team, but they’re beatable? Sure, I can accept that. But it’s not your team that’s beating them, Chris.

Richmond defeated Geelong twice now this season, getting close in Round 20 but not in Round 13.

Before that? The Hawks crushed the Cats in a qualifying final by 59 points. 59 points, with everything at stake and no positive finals experience.

Geelong almost went the entire first half of that match without kicking a goal, saved in the dying moments of the second quarter by Patrick Dangerfield. Hardly an obvious symptom of a side that’s just getting lucky.

It would probably take a few thousand words to break down a comparison between Richmond and the ‘juggernauts’ of the past, but let’s just think about the numbers associated with the Tigers’ dominance at the MCG over the last 12 months.

Richmond have now won 19 matches in a row at the MCG. Heading into this match, they averaged more than 101 points per game in this streak, entering triple figures on 13 occasions and enjoying a winning margin of more than 41 points.

At the other end of the ground, the average score kicked against the Tigers is 60.72 points.

Richmond haven’t conceded more than 100 points to any opposition at the ground in this streak. They have also managed to keep their opposition to under 70 points on 12 separate occasions.

Scott is clearly looking back at the past through rose-tinted glasses.

Did Dynastic Hawthorn, under Alastair Clarkson, achieve more than Richmond has so far? Of course. One premiership against four. No contest.

But Hawthorn never won 19 matches in a row at the ‘G, so let’s not pretend, like Scott does in his own mind, that Richmond aren’t worthy of a comparison. 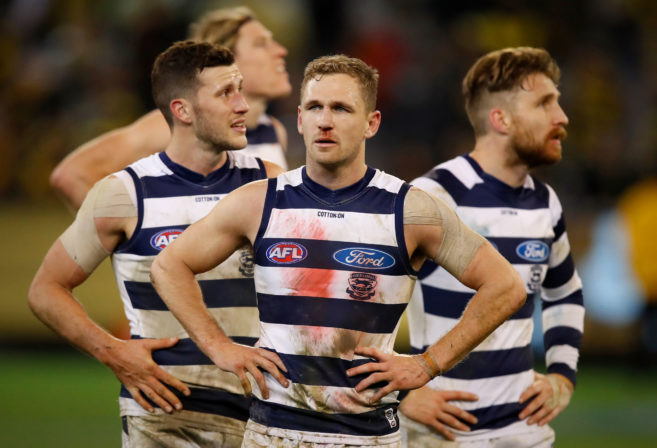 And now for the worst of it – when asked about how important the next match against Hawthorn is.

“Just win every game we play, that’s our plan. I’ll tell you what though – if we lose (against the Hawks) we’ll just win the next two. It’s not that complicated. Hopefully the next six,” Scott said.

“If we’re good enough over the next six or seven weeks and we get the chance to play them (Richmond), and hopefully we do, we’ll give ourselves a really good chance and I think there are a lot of other teams in the exact same boat. They’re a good team but they’re beatable.

Geelong are ninth on the ladder with 11 wins and eight losses with a healthy percentage. In order to qualify for finals, they must defeat Hawthorn (Round 21 – MCG), Fremantle (Round 22 – GMHBA Stadium) and finally the Gold Coast Suns (Round 23 – GMHBA Stadium).

Sure, it’s not the worst way to close out the season, with the exception of the now top-four Hawks – a team that already beat Geelong this season, at the MCG.

But to forecast, not only beyond the rest of the season itself, but so far deep into the finals that you’re hypothesising about playing Richmond in the grand final when you aren’t even in the top eight yet? With less than a month to go?

It’s staggering. It really does seem like a poker player trying to tilt opposition coaches off the table.

And that final line, about competition being tight at the top of the ladder? That’s a fine statement for Damien Hardwick to make, for Leon Cameron, for Adam Simpson – for sure. Hell, Alastair Clarkson and Simon Goodwin could probably get away with it.

But for a coach that hasn’t even booked his team a ticket to September yet? Your squad is barely in the middle of the table Chris, now is not the time to be firing shots at those at the top.