It’s hard to recall an incident as unnecessarily violent as Andrew Gaff’s strike on Andrew Brayshaw since Barry Hall made world headlines in 2008 with a horrific punch to the face of Brent Staker.

Gaff should, and almost certainly will, receive a very lengthy suspension for his season-ending hit on the Fremantle youngster. However, his lack of a similarly match-ending sanction on the day has reignited a red card debate that’s popped up before this season – namely, when Jeremy Cameron clumsily collected Harris Andrews high in marking contest.

The argument of those in favour of introducing send-offs to the AFL is that it’s unfair for one team to have a player rubbed out for the match due to the illegal action of an opponent if that opponent is free to play on.

The suggestion, therefore, is that if one player’s dirty play ends someone else’s day, they should have their day ended prematurely too.

While this sentiment is well-intended, it wouldn’t solve the initial injustices caused by reportable offences, and would create new inconsistencies too.

Let’s start with the facts, however, and the facts are there are already send-off provisions in the laws of Australian football*. While that specific law does not apply to the AFL competition, neither Cameron nor Gaff would have been sent off if it did.

Here is the law in question.

20. ORDER OFF LAW
20.1 APPLICATION This Law 20 applies to all competitions other than the AFL competition.
20.2 ORDER OFF FOR REMAINDER OF MATCH In addition to being reported, a field or emergency field Umpire shall order the Player reported from the Playing Surface for the remainder of a Match if the Player is reported for any of the following Reportable Offences: (a) intentionally or carelessly making contact with or striking an Umpire; (b) attempting to make contact with or strike an Umpire; (c) using abusive, insulting, threatening or obscene language towards or in relation to an Umpire; (d) behaving in an abusive, insulting, threatening or obscene manner towards or in relation to an Umpire; (e) intentionally or carelessly kicking another person; (f) an act of misconduct if the Umpire is of the opinion that the act constituting misconduct is serious in nature.

It is worth noting that striking an opponent is a separate reportable offence (19.2.2 (ii)) and does not fall under the umbrella of a ‘serious act of misconduct’.

No other reportable offences see a player red carded, however, most competitions around the company take up Law 20.5’s offer, which is;

20.5 ORDER OFF FOR SPECIFIED PERIOD In addition to being reported on the first occasion for committing a Reportable Offence, other than those listed in Law 20.2, a Controlling Body may determine that a Player be ordered from the Playing Surface for such period as it in its absolute discretion deems fit.

In almost all adult leagues, this penalty is a yellow card sin bin.

Whether striking should be considered a red card offence is a debate for another time, however, this law does highlight that, at a fundamental level, the game of Australian football’s tendency to not eject players is not through a lack of legislation, nor a non-realisation that reportable offences can cause harm to others.

While, admittedly, there’s no reason this law couldn’t be modified slightly and then introduced to the top level of the game, this goes against the trend when it comes to the way the AFL deals with reportable offences.

The vast majority of suspensions and fines are issued by the Match Review Officer, not the umpires. In fact, earlier this season, Geelong coach Chris Scott questioned the usefulness of match day reports by umpires after a soft report on Jordan Murdoch – and I agree.

Our umpires already have a hell of a lot to look out for on match day (they also do a much better job than people give them credit for), and there really isn’t any reason for them to be bringing incidents to the attention of the MRO given each match gets dissected from every angle anyway.

If we can give umpires one less thing to look out for on match day, that allows them to focus more on the thousands of other decisions they have to make. Say what you want about our current MRO, but having one person (or panel) in charge of looking over all reportable incidents is, in theory, the best way to achieve consistent outcomes.

Introducing a yellow and red card system, however, turns that entire process on its head. 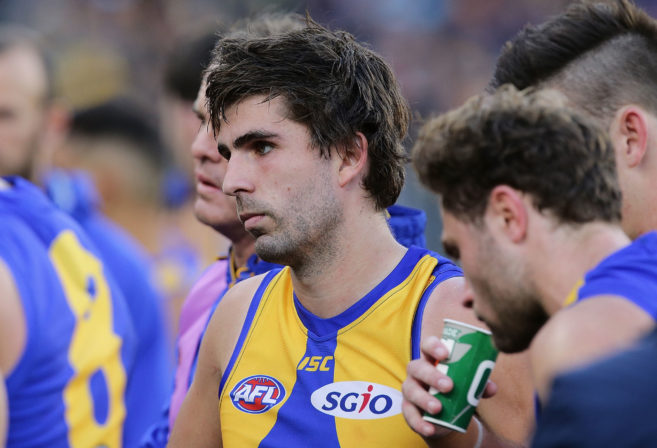 If we now say that a suspension is no longer enough punishment for a reported player – and that they must suffer some sanction during the match – the extent to which we’re asking umpires to look off the ball and behind play increases considerably, while yet another layer of decision making gets added to an already impossibly complex task.

A simple late spoil is no longer a question of ’50 metres or not?’, it becomes an unreasonably open-ended decision making process that, in a way, forces the umpire to do the MRO’s job in a handful of seconds with no replay.

Not only is that an issue, but oe of the biggest aspects of the Gaff incident that’s been overlooked is that none of the umpires actually saw the strike – so, even if the send-off rule applied in the AFL and striking was considered a red card offence, Gaff still wouldn’t have been marched off.

And therein lies something of a Pandora’s Box that a send-off law would open. Would we, as fans, be okay with some players getting sent off for reportable offences, with others escaping that part of the sanction because their indiscretion escaped the attention of the umpires?

The reality is that not every reportable offence would get picked up on the day, and this frustration at the unfairness over who’s game ends early would simply manifest itself in another way.

Would it be fair for two players reported for striking in the same game to both receive three-week bans if one player got red carded early in the match and the other did it away from the gaze of the officials?

Of course, the other snag such a rule could hit would be if an umpire got it wrong.

Imagine the outrage at having a key defender from your team red carded for nothing more than a clumsy spoil, and imagine how much that outrage would grow if the MRO deemed the incident not worthy of a report.

Imagine if Nic Naitanui had also been sent off (or sin binned) for his tackle on Karl Amon?

I understand that people will still feel it wrong for a player to continue participating in a match after they knocked another player out of it, but an ‘eye for an eye’ system just isn’t the way to assuage that injustice. While the impact the incident had on the victim is – and should – be an aggravating circumstance when deciding a penalty, if penalties – be they send-offs or suspensions – are solely tied to victim impact it simply creates wild inconsistency.

A punch to the back of the head that causes little impact should always be punished more heavily than a high bump from a mistimed attack on the football that concusses someone, in my book.

There are also several reportable offences that don’t necessarily stop someone else from playing, that we all agree still warrant suspension, such as spitting on another person, threatening an umpire or staging.

We also seem to forget that reported players are often suspended for longer than the player they injured stays out. As unfair as it seemed for the Giants to still have Cameron on the field while Brisbane were without Andrews, the Lions got him back on the field a week before GWS got their man back.

Zak Jones was recently suspended for two matches after his late bump on Kyle Langford knocked him out of the game – but the Essendon youngster was available for the selection the next week.

In both of those cases, and no doubt in countless more, the lack of a send-off at the time proved hardly to be an injustice in the long run.

The AFL still has much to learn from incidents like the one we saw on Sunday, and we can all agree stamping that conduct out of the game has to be a high priority.

But quickening the pace at which justice is applied creates more problems than it solves.

Author’s note: The provided link is to the 2017 copy of the laws of the game. However, there were no law changes introduced in 2018, so the information contained within is still up to date.