Can the Wallabies bring the Bledisloe Cup home?

What is the haka? It is more than challenge thrown down, much more.

It is New Zealand invoking the roots of its indigenous mana, grounding the All Blacks in the character and achievements of their forefathers. It is the most important period of focus immediately before the kick-off and not all opponents can match that intensity, or the sense of connection to their history.

Before last season’s Bledisloe Cup win over New Zealand in Brisbane, the Wallabies made a similar effort to ‘come back home’ to something very fundamental in their cultural heritage.

For the first time in Wallaby history, the national team adopted an Indigenous design on their jersey, representing the fourteen players of origin who have played for Australia at rugby union. 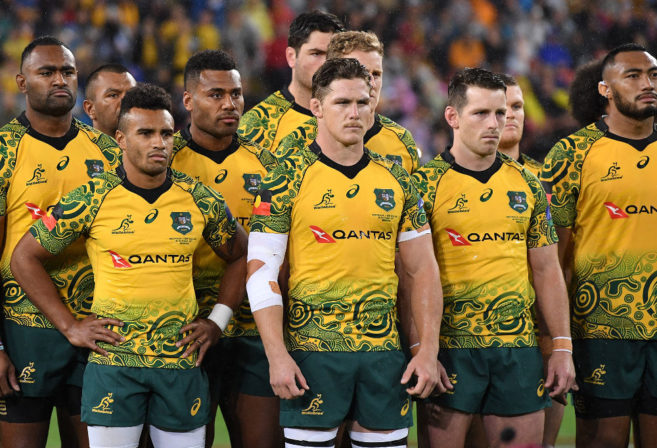 There are far fewer indigenous players in union than there are proportionately in either Aussie rules or League. Those in league include a large bunch of all-time greats, players like Arthur Beetson, Steve Renouf, Greg Inglis, Laurie Daley, Johnathan Thurston and Gorden Tallis.

In previous years, the NRL has sponsored games between teams of Indigenous players and World or NRL All-Stars. In 2010, both the jerseys and headgear of the team was decorated by Sid Domic, an ex-player and Indigenous artist.

But for over 20 years between 1963 and 1984, the bedrock of ‘black versus white’ games – or ‘all blacks against all whites’ as it was described tongue-in-cheek – had been laid down more spontaneously, in a town out in the bush of West Queensland called Barcaldine.

The highlight of what became a raucous rugby weekend celebration was the ‘Black and White ball’ on Saturday night at the Globe Hotel. Everyone attended, blackfella or whitefella alike. No one was excluded.

The family at the heart of what would now be far more grandly perceived as a ‘reconciliation initiative’ were the Aboriginal Thompsons. They presided over a rugby carnival which began variously as an attempt to raise money for a child with cerebral palsy, or simply a challenge to find out who was better at the game, black or white.

Nobody knows the truth for sure, but it doesn’t matter. Barcaldine is a town which can somehow accommodate both histories with a grin and a shrug of shoulders, it is a perfect storm in the middle of nowhere. As the latest torch-bearer of the Thompson legacy, Dave Thompson, says, “Reconciliation in Barcaldine began in the 1960s. If you’re a racist in Barcaldine, you won’t have too many mates.”

Thompson is a custodian of the Iningai people from central-western Queensland, whose role is to provide a Welcome to Country and offer stories of the culture of his ancestors. Those stories, sometimes openly touching on the removal of the Iningai from their homes and the forcible suppression of their language and customs, are not always easy on the listener. They tend to “put him in a bit of a crouch,” as Thompson says with a wry smile.

Kurtley Beale (the only Indigenous player in the current Wallaby side) underlined the need to reconnect with the Indigenous past in his speech when the new shirt was unveiled.

“I see the other codes have an Indigenous round and I can just see the reaction from the Indigenous communities when Indigenous Round is up and it’s always a special day – the Welcome to Country, the smoking ceremonies, the dancers out on the field…

“You don’t understand how important it is for myself and the other Indigenous players past and present to stand up and be role models for young Indigenous kids out there who are aspiring to be professional athletes.

“It’s something that I hold close to my heart and I think it’s a great step forward.” 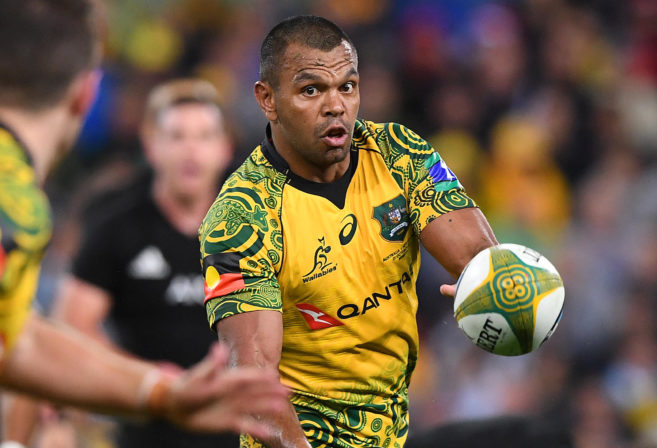 For one evening at least, the design of the new jersey and Shannon Ruska’s outstanding ‘Welcome to Country’ before the game helped bring the importance of the likes of Lloyd Walker, Jim Williams and the Ella brothers home. There was a palpable sense of respect for the people who had gone before, and traversed the same rugby land as the current Wallabies – a sober gaze at the footprint of the past.

‘Bringing Them Home’ is the title of one of the most important political documents in recent Australian history, a 680-page report (tabled in Federal Parliament in 1997) recording the stories of an estimated 100,000 mixed-race children who were separated from their families by force, deception or under duress. They became known collectively as the ‘Stolen Generations’.

The emotive force associated with the idea of ‘bringing them home’ was amply evident on that evening in Brisbane on October 21, 2017. It drove the Wallabies forward and hauled them over the top of New Zealand in a very tight game. They brought it home and closed it out when it mattered most.

If the Wallabies are to win back the Bledisloe Cup in 2018, they will have to retrieve that emotion on a more regular basis and match the Kiwi connection with their own past embodied by the haka.

On the tactical front, they will have to secure their own breakdown ball – an area where the All Blacks have tended to attack Australia in the recent past – and exit without avoidable hiccups from their own last third of the field.

Above all, they will have to defend well, and in this area a big onus is likely to fall upon Reece Hodge, who I believe Michael Cheika will select in the crucial number 13 jersey for the first game of The Rugby Championship.

There were some definite clues about Hodge’s ability to handle the position on that evening in Brisbane, even though he was defending for the most part at inside centre.

The first example suggested that he might have a hard night ahead of him:

This break occurred from a lineout where the All Blacks had caught the Wallabies in one of their ‘musical chairs’ formations. Instead of having Bernard Foley defending in the tram-lines, it is hooker Tatafu Polota-Nau – which means that Foley has to be in the 10 channel next to Hodge: 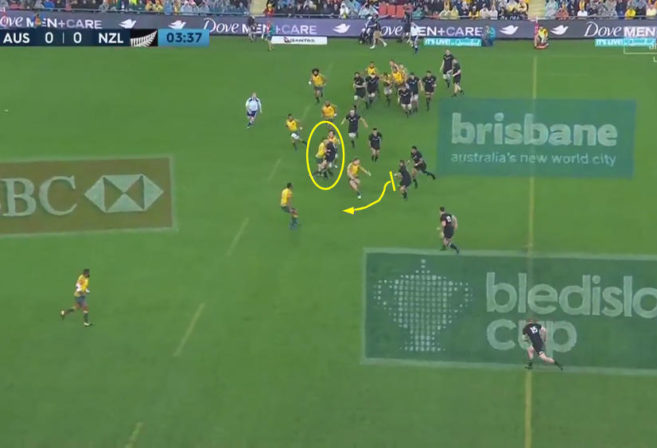 The New Zealand backs clearly identified the opportunity, using the size of Sonny Bill Williams to blot out Foley on the decoy, with Lima Sopoaga pulling Hodge wide to open the gap for an inside pass to Waisake Naholo. The break is not Hodge’s responsibility – he is confronted by a 2-v-1 because Foley cannot push Sonny Bill off and stay connected with the man outside him.

The second incident (from a New Zealand scrum in the Wallabies 22) showed how well Hodge could cover for Foley’s absence:

Initially, Foley is pulled a couple of steps across towards the far side by a Kiwi decoy at the base of the scrum, and is therefore out of the front line when Aaron Smith goes to pass the other way:

With Will Genia right up on Sopoaga, Hodge is in perfect position to rush the gap between the All Black 10 and his centre, Ryan Crotty: 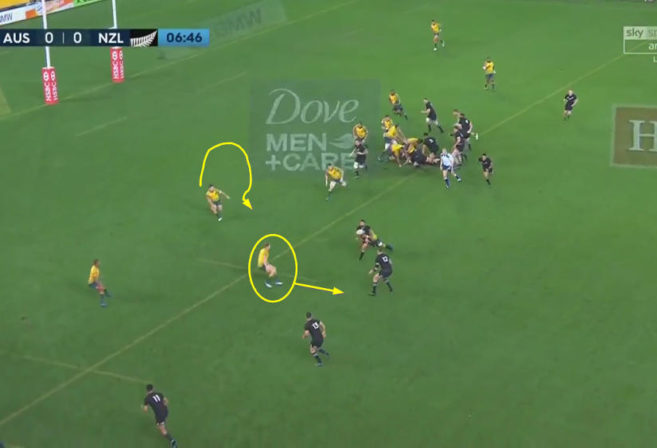 On the rush, there is no attempt to number up on the outside. The two Australian defenders there, Hodge and Beale, are simply looking to penetrate the gaps or make front-on hits – and this is where Hodge is at his best.

Tevita Kuridrani was of great value to Hodge throughout the game in pointing out the spots where he could hit the bullseye:

Here, the Australian lineout defence is in its alternate formation, with Foley in the tram-lines and Michael Hooper defending in the 10 channel. With Hooper more of a physical deterrent, the ball is shipped on to Crotty and Kuridrani is able to direct Hodge the exact point where the tackle will be made. 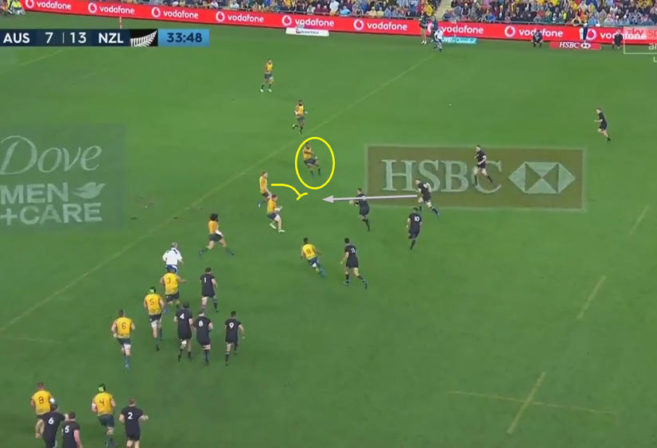 Hodge and Kuridrani worked well as a defensive pair in the centres, with Kuridrani often the chief influencer funnelling play back into his partner:

Kuridrani’s rush cuts off the pass further out and forces the ball-carrier, Patrick Tuipulotu, to take the contact on Hodge’s terms.

With Kuridrani out of the line-up and Hodge moved one place further out, the key question will be whether the Rebels utility can make those decisions by himself:

In this instance, Kuridrani is policing the defence on the other side of a midfield ruck, which means Hodge is responsible for calling the shots out to the right side: 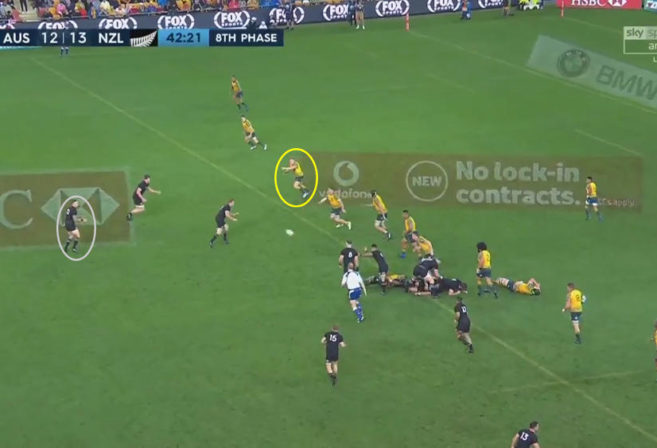 Hodge picks out the likely All Black first receiver Sonny Bill Williams, and that in turn releases Foley to rush out and make the tackle on Rieko Ioane. Michael Hooper completed a perfect defensive picture by winning a turnover at the ensuing ruck.

Summary
Rugby Australia should adopt the Indigenous jersey on a permanent basis. The build-up to the third Bledisloe match in Brisbane, both pre-game and during the week, created a positive emotional intensity for the Australian team. Reconnecting with your past will do that for you, as the All Blacks know only too well.

The notion of racial reconciliation and ‘bringing them home’ is such a powerful sentiment in Australian culture as a whole that it can only benefit the game of rugby in the country. Hopefully, an active effort will be made to recruit and develop Indigenous players in the union game in future and add to those 14 Wallabies.

That is the larger emotional and political background. The foreground is the selection and tactical approach of the two teams.

Australia will have to pay attention to their ball control in contact and the accuracy of their exits – both areas where the All Blacks have reaped rich dividends in the recent past. Above all, the Wallabies will need to defend well, and a lot of the responsibility for that defence will necessarily fall on their number 13, whether it is Reece Hodge or Curtis Rona.

Hodge has the experience at the spot inside, and there is no question about his tackling ability, but the game will place huge pressure on his ability to make the right call consistently in an unfamiliar position at this level.

Success could be the making of Reece Hodge as an international player, and go a long way to bringing the Bledisloe Cup back to a Wallabies trophy cabinet from which it has been absent for far too long.