Why the Brisbane Roar's 'Dad's Army' is a problem

One with a decorated career in the Eredivisie, the top echelon of Dutch football. The other a midfield lynchpin, a regular bastion for the Socceroos in seasons past.

Yet despite these glowing credentials, Thomas Kristensen and Matt McKay of the Roar are a terrible burden on the club.

This is in no way the fault of these players. Rather, the lion’s share of the blame should go to Roar coach John Aloisi, who persists with using an ageing core of midfielders. It slows and hampers their play, and is a key reason for their recent lack of success.

Experienced veterans have their place. Bert Van Marwijk`s recent redeployment of an ageing Mark Milligan in central defence was a brilliant example. It masked Milligan’s increasing lack of pace while maximising his ball playing ability.

Socceroo stalwart Mile Jedinak’s similar conversion to centre back at Aston Villa is in the same vein.

Yet Aloisi’s brutal mismanagement of these players sees two 35-year-olds deployed in midfield. It is the worst of both worlds, exposing their lack of pace while hiding the assured composure veterans bring to the table.

As fine a coach as Aloisi is, his obsession with slow, ponderous attackers (Massimo Maccarone, Jade North, Kristensen and McKay) destroys the Roar’s attacking impetus.

Tuesday’s match against City was a case in point, with the Roar deploying Kristensen and McKay as wide players in a 4-3-3 formation. In fact, the surprise was that senior players like Eric Bautheac and Henrique didn’t refuse to play upon hearing the team sheet. It read like one that was chosen by City coach Warren Joyce.

Yes, the opening goal came from a Jake Hingert brain fart; a failed Cruyff turn on the edge of the box. The Roar lost possession, the ball was swept into the Roar box and City had an easy tap-in.

But yet the only reason this happened was that the Roar’s attack on that day was so slow and ponderous, an attack consisting of a 38-year-old Italian Massimo Maccarone, 37-year-old Melbourne Victory veteran Fahid Ben Kahlfallah and 32-year-old ‘Slippery Fish’ Henrique Andrade Silva. 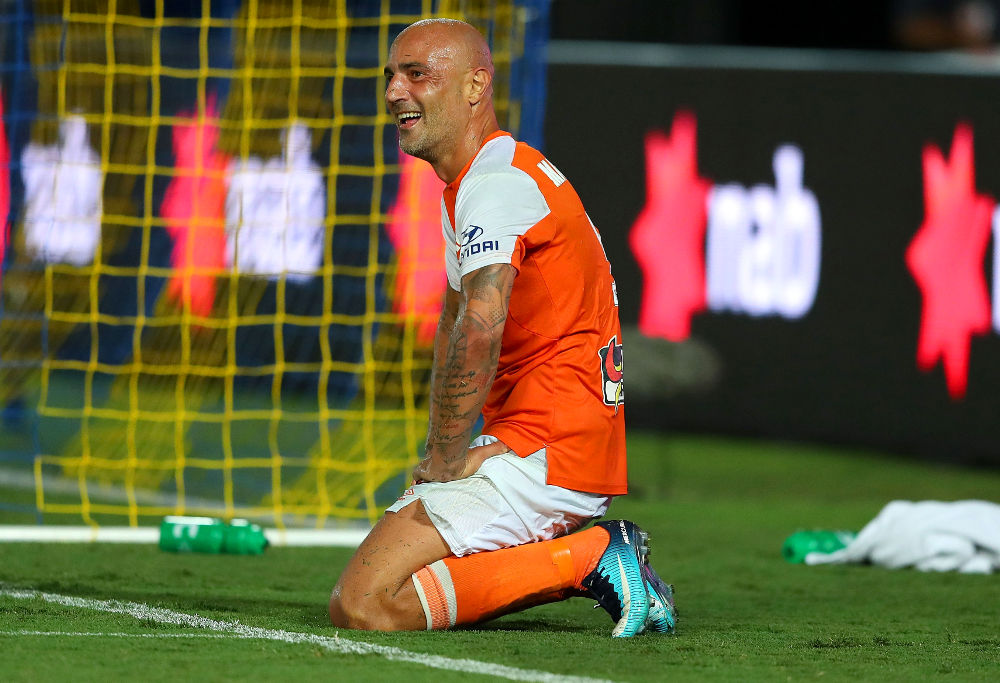 This 107-year-old offence had experience aplenty but could barely move. This chronic lack of pace meant that the Roar could not counter when they won the ball back, which translated to a negligible attacking threat. This drained the belief from the Roar back four.

After all, what’s the point of winning the ball back if you couldn’t do anything with it? You couldn’t hurt the opposition and you couldn’t maintain possession. They were lambs to the slaughter. And City hotshot Bruno Fornaroli was all too happy to act as the butcher and deliver a coup de grace to Brisbane’s title aspirations.

At first, the lesson seemed to have been learned. Perth Glory striker Adam Taggart and Aussie wonderkid Stefan Mauk were brought in. They were a step in the right direction, an investment for the future.

Yet this illusion of long-term strategic planning evaporates when you realise that both players are on relatively short-term contracts. To compound the problem, the Roar was rumoured to be bringing in Mathieu Flamini as a marquee.

As good a player as Flamini is, his legs are gone and would represent a return to mistakes made last season.

Come on, John. You know better than this.