Winx reminds us why she's the greatest of all time

Winx will win 29 races in a row, culminating in a fourth-straight Cox Plate, and go down in history as Australia’s greatest racehorse.

Her versatility and ability to win against the odds makes her stand out against her rivals.

The champion mare confirmed this on Saturday in the Group 1 Winx Stakes (1400m) at Randwick.

Racing on a surface that was ordinary at best for a Group 1 meeting and certainly one that wasn’t favouring horses coming down the middle of the track, Winx overcame that adversity to record another easy win.

In her streak of 26 wins in a row, opposition trainers and jockeys have tried their best to beat her. They’ve tried running races at a quick tempo, knowing Winx gets back early. They’ve tried going slow from the start, knowing that she relies on having one quick sprint in the final 300m.

But none of those tactics have proven detrimental to the Chris Waller-trained mare.

I can understand why people make a case for Black Caviar to be our greatest horse. She was undefeated with 25 wins from 25 starts. And she went overseas to show her wares.

But the reason I have Winx ahead of the Peter Moody-trained champion is because Winx has been thrown in the deep end more often. Connections have challenged her more regularly. 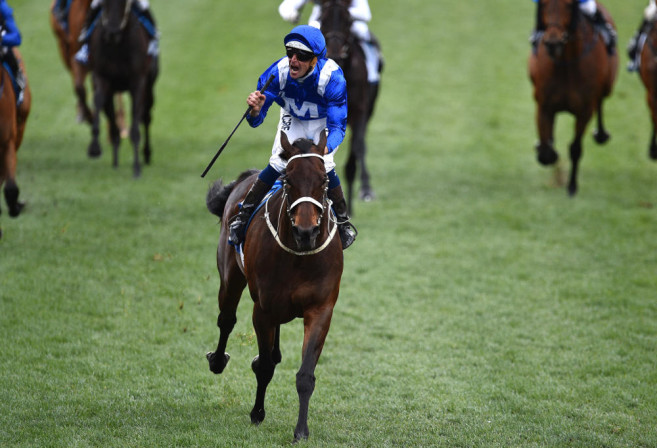 Black Caviar raced 24 times over the distances of 1000m and 1200m. She only once raced over 1400m and that day they genuinely walked, making it a sprint home at the finish.

That’s freakish. There has been the odd stayer and middle-distance horse to win over the shorter distances, especially early in their campaigns, but for Winx to be able to do so consistently over her career is unheard of.

Waller has rightly avoided handicap races because she would simply be crushed by weight, which could be a knock on her if you are in the Phar Lap camp, but the weight-for-age scale is a tried and tested measurement.

There’s no better horse to have raced on Australian soil than Winx.

The fact she races back in the field and has still managed to win 26 races in a row – all of them at Group level – puts her at the top of the pile for me.

Winx will retire as Australia’s greatest ever racehorse. And we are blessed to have seen both her and Black Caviar in the same generation.

Her next stop is likely the George Main Stakes (1600m) at Randwick before the Turnbull Stakes (2000m) at Flemington and the Cox Plate (2040m) at Moonee Valley. Sunlight shines again
Another fabulous female showed her class at Caulfield, bouncing back to win the Group 3 Quezette Stakes (1100m).

“It was the Sunlight of old today,” trainer Tony McEvoy said after his star filly held off rivals in a spirited finish.

Sunlight was well beaten in Adelaide when resuming from a spell, blown away by Everest hopeful Nature Strip.

“She went into that race a little light on in terms of fitness and she blew out,” McEvoy said.

“She also was beaten by some sort of a horse in Nature Strip. I thought there was six lengths of improvement to come going into today’s race.”

Sunlight now has six wins and three placings from her nine starts and will be kept to sprint races this campaign.

“I’m in no hurry with her. There’s a long way to go in this campaign.”

Showtime will now head to the $1 million Group 1 Memsie Stakes over the same trip as the Lawrence (1400m), where a win will likely book him a ticket at stud.

“If he can get that Group 1, he goes and stands at (John Messara’s stud) Arrowfield,” co-trainer Wayne Hawkes said.

“I don’t know if any stud master has been able to do what he has. He got Danehill, then (his son) Redoute’s Choice and then (his son) Snitzel and so it would be great if this one could follow the line.”

After opening at $7, Showtime firmed into $6 by race time and he sat behind Jungle Edge for much of the trip before forging clear in the straight and hanging on to defeat last year’s winner Hartnell by a long neck.

There were plenty of eye-catching runs in the race, with Hartnell proving he’s not done yet, while the likes of Kings Will Dream, Widgee Turf and Grunt did not disappoint over the shorter distance.

How we went
I would have called it a bad day for followers, with four of the five selections losing, but amazingly it was still another profitable Saturday. When Egyptian Symbol won race eight at Randwick at around $7.30 she ensured that our yearly tally grew again. There were a couple of hard luck stories across the day, but we push on.

* Based on $20 spend per selection and BetEasy’s top tote dividend.

Darkness – after a duck last week (it happens, hopefully not often), we are down for the first time this year. Four bets in Melbourne for three seconds hit hard.

The Mounting Yard heads to HQ today, which is, of course, Flemington, for Australian Guineas day.

The Mounting Yard makes its return as the Autumn Carnival starts to ramp up with it being Blue Diamond Day at Caulfield where the favourite Hanseatic will try and add another two-year-old Group 1 to the Godolphin trophy cabinet. The Futurity Stakes accompanies the Diamond with Super Seth and Melody Belle going to head to […]